What is it about a good, solid, rye whiskey that we rye drinkers tend to love so much?

Is it the initial burn?

Is it the slow-to-fade warmth after that initial burn?

Is it the subtle waves of flavor presented during this fading warmth?

Maybe a little of all three?

Whatever it is… if you’re a rye fan you know what I’m talking about.

So, when I was handed this leather clad bottle of Basil Hayden’s 10 Year Old Rye Whiskey… I was instantly intrigued, but admittedly a bit skeptical.

But, I feel they did something right on this one.  They stuck to the basics and didn’t mix it with anything.

As mentioned in our previous announcement it’s the first rye the company has created with an age statement and at 80 proof, it’s what I would consider a “light rye” in that it’s probably something even those that don’t enjoy the typical burn associated with a heartier rye could easily enjoy.

A possible gateway rye… if you will. 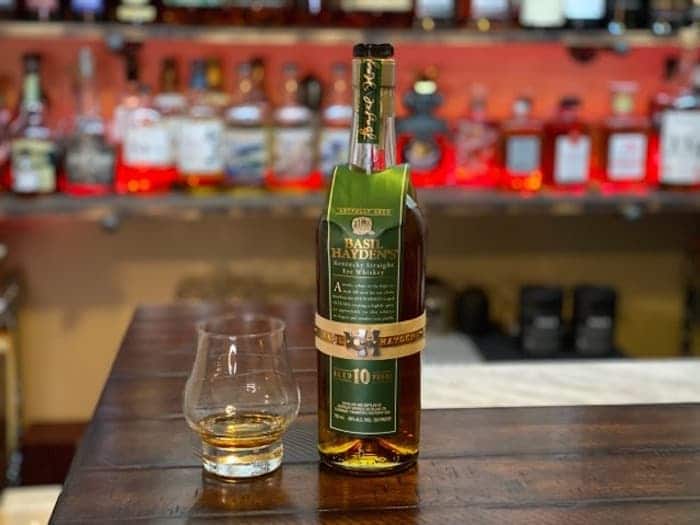 Appearance: In the glass it’s akin to a light golden liquid sunshine, if you could actually bottle such a thing.

Nose: Imagine taking Gramma’s semi-famous cinnamon enhanced apple sauce, sticking that in a charred oak barrel, and then sticking your nose in the barrel for a big ole sniff a few days later. It’s kinda like that. Probably.

Palate: Initially what I can best describe as a burnt raisin which then opens up to a rich toffee flavor finishing again with Gramma’s cinnamon applesauce. Not quite semi-famous, but definitely has potential.

Unlike it’s mixed bag predecessor bottlings which were best suited for mixing cocktails in my opinion, the Basil Hayden’s 10 Year Old Rye Whiskey can easily stand on it’s own and be served neat to those that love the flavor a good, solid, rye whiskey can provide.