Basil Hayden has gone and mixed things up! They’ve introduced a new bourbon to their lineup with a new mash bill and new packaging across the board. Welcome Basil Hayden Toast, with its fiery label and beefed up belt buckle. This new bourbon replaces rye with brown rice.

This is not the first brown rice bourbon to be released by a Jim Beam brand. Why use brown rice over rye? The brown rice is meant to create a softer, more approachable, less spicy bourbon than the typical rye mash bourbon.

OK, so we’ve got this brown rice bourbon that’s a little sweeter than a rye mash. But why is it called “toast”? A portion of the bourbon is placed into toasted barrels for approximately two months after initial maturation. Then that’s mingled back with the original bourbon that only rested in level four char barrels, creating Basil Hayden Toast.

How does a toasted barrel differ from a char barrel? “Toasted barrels are heated much more gently, resulting in a dark brown toast rather than a blackened char. Toasted barrels add a bit more vanilla flavor to the liquor, as well as spicy accents. Because the wood hasn’t been burned to a crisp, the sugars haven’t had time to caramelize, making the whiskey a bit sharper on the tongue. Toasted barrels also do not impart as much color into the spirit, resulting in a lighter shade,” says the brand. 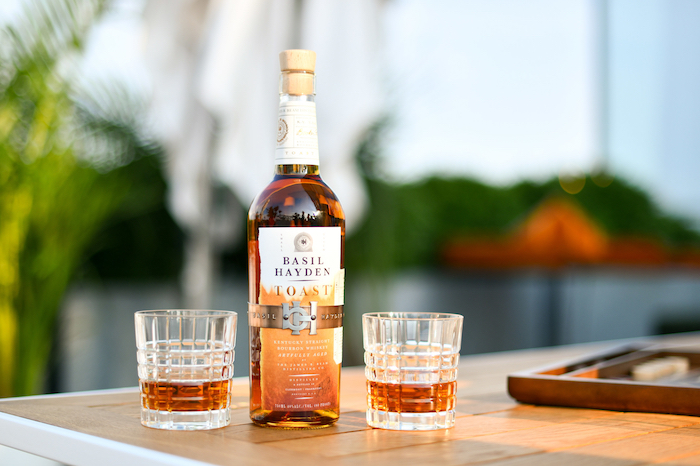 Nose: The aroma is light. There are very faint notes of sweet cereal, light brown sugar, and glazed donuts with the tiniest hint of a distant campfire. The nose is very enjoyable and pleasant.

Palate: The flavors are just as delicate as the nose. It’s not strong on flavors but I did detect rhubarb, almond, and crab apple. It’s soft and smooth with a touch of warmth. Very approachable for anyone, especially new bourbon drinkers.

I love Basil Hayden’s Bourbon and Dark Rye Whiskey, but I didn’t totally fall in love with Basil Hayden Toast. The flavors are light and not overpowering which might be best for someone just getting into whiskey or bourbon. It’s is not super sweet. It’s floral and a bit herbal. I feel this would be great mixed with carbonated water on a hot summer day or when you need a more refreshing cocktail. It’s so light and subtle in its nose and flavors. Great for someone that doesn’t like the sweeter bourbons or the spiciness of rye.