Even though I’ve been reviewing whiskies for this site since 2015, I hadn’t come across the term “vatted malt” before, and when I first heard it I thought it referred to a trough-size milkshake. A vatted malt is also called a blended malt, and what it does is bring together several single malts into a mix.

You rarely hear about a vatted malt whisk(e)y outside of Scotland, so it piqued my interest—especially when I learned that Barrell was making one: Barrell Whiskey American Vatted Malt. Mostly non-distilling producer Barrell is known for its interesting (I mean this in a non-fake-tactful way) blends: If anyone’s going to attempt this rare breed, I’m glad it’s them. Each batch Barrell makes is a one-time thing; if you find one you like, snatch as much as you can up, because it won’t be replicated.

Like most of Barrell’s other releases, this is high-proof, at 117.5 percent. The single malts in this blend have been aged from a range of 1.5 to eight years.

Barrell says this release took years to make happen, as many of the whiskies in the blend come from emerging distilleries that have never traded or sold bulk whiskey before. And though some wanted to remain anonymous, others that played a part included:

Given the perfect malty storm of vatted malt’s rarity, Barrell’s prowess, and my general thirst, I was pretty excited to give this one a go. 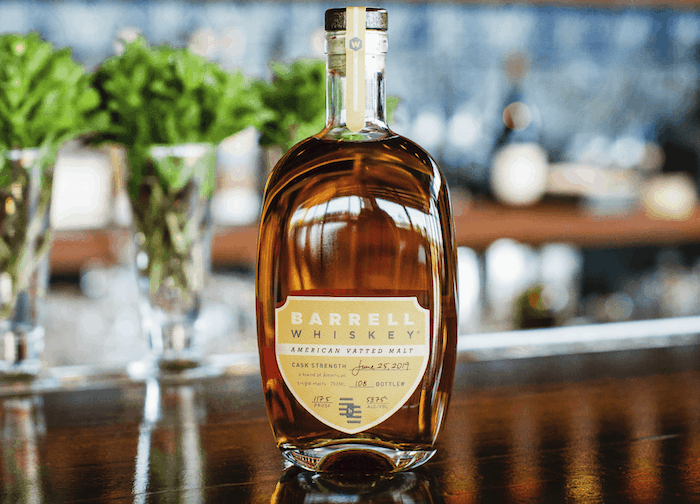 Appearance: Very, very copper in color. The shiniest of new pennies. It doesn’t coat the glass like a wine; there’s nothing winey about this. The whiskey awaits in the glass like the most orange glowing sunset.

Nose: Coffee beans, fennel/anise. There’s a richness and depth to the nose too. The smell of the milk in a latte, but also that smell of new and creamy paper. Like when you crack open a fresh book you really want to read and can’t help but bury your nose a little in the pages? That’s what this smells like.

Palate: Oh, my gosh! This is really complex and cool. It begins caramel and cinnamon-forward, and then mellows into some distant smoke and just a little peat. I will be the first to admit I have a low peat tolerance (LPT?), and this has just a hint. Not enough for me to want to, like, stick my tongue out for air after tasting this. The weight and mouthfeel also prove very satisfying. This is thick without being viscous.

Like many of Barrell’s blends I’ve tasted, this is high-proof without tasting high-proof. There is no burn or heat to this at all. You can tell it’s a blend in that it’s complex, but it is truly a blend: more melting pot than salad.

If you have traditionally thought yourself meh on single malts (as I often do), I urge you to find this, if you can. I was pleasantly surprised. I’m not sure why, really, because I’ve enjoyed just about every Barrell I’ve tasted, but this is definitely up there. Kudos! It’s a little wacky and yet it all works together. There’s a smoothness to it I didn’t expect. It’s like one of those nights with a friend you keep putting off and then have a really good time once you go out. I like this a lot.