Cask strength whiskey always ignites my curiosity. Is it going to feel like jet fuel, will it be shockingly smooth, will it offer a delight of high-octane complexity? The buzz around the latest offering from Louisville, Kentucky’s Barrell Craft Spirits – a cask strength whiskey that’s the first from its Infinite Barrel Project – was more than enough to get me excited, given its all-around uniqueness.

The Infinite Barrel Project takes almost a reverse approach compared to the “solera” method the distillery otherwise uses, combining small amounts of whiskey from many barrels to make a different blend for each bottling. It’s a literally and figuratively unique and layered process (which was previously explained more thoroughly on The Whiskey Wash).

In brief, and on a much smaller scale, an “infinity bottle” is one in which you pour a small remaining amount of whiskey from another bottle to empty it, and continuously add to this new bottle as you finish other whiskies. And, as you drink from the infinity bottle, the intention is to continue adding to it from other bottles – creating an ever-evolving expression, potentially in perpetuity… or, as long as you’re into maintaining it. The Infinite Barrel Project takes this concept to a larger, barrel-size level.

In the official launch announcement for the Infinite Barrel Project, Master Distiller Tripp Stimson indicated that this is just the beginning of a “series of innovative product lines” the distillery will be working on. Here, I tried Barrell Craft Spirits’ foray into infinity. 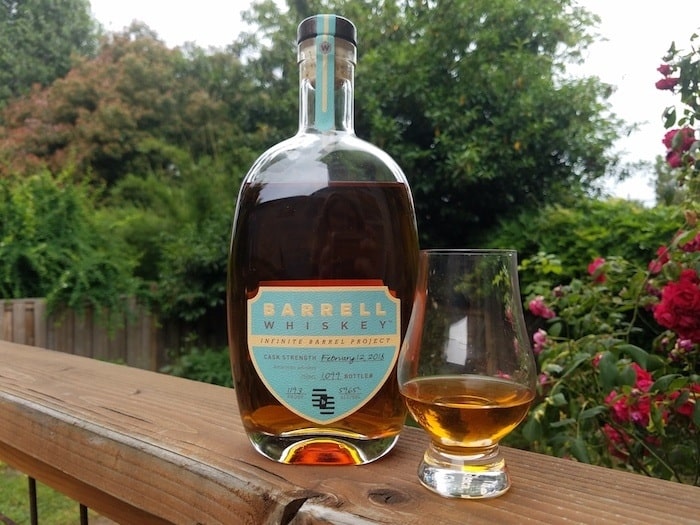 Vital Stats: My sample was bottled on February 12, 2018 (bottle # 1099) – the first bottling of the Infinite Barrel Project. Crafted and bottled in Kentucky at 119.3 proof and retailing for upwards of $60, it contains a unique blend of:

Nose: A musty or muskiness akin to tanned leather is first prominent, followed by nuances of preserved citrus, cocoa and toasted spice.

Palate: There is an expected heat on the tongue, with a flash of cinnamon candy heat that dissipates as quickly as it arrives. Turmeric, cacao, singed marshmallow and buckwheat honey with a hint of bitters are revealed, offering a bright, hearty and balanced fullness.

Simply put, this is a special bottle. The uniqueness of the infinity barrel concept and branding is a strong hook as-is that might entice whiskey lovers – but it doesn’t rest on these laurels. Especially for a company not (yet) distilling its own whiskey, the Infinite Barrel Project is a bold and creative venture that still requires a highly nuanced and fine-tuned process in order to get it right - and they sure got this right. This is a blend to be savored, loved and appreciated neat or with a small rock. I wouldn’t pass up a chance to try future iterations as it continues to evolve, and eagerly await such releases. In the meantime, I'll also use this as inspiration to start my own infinity bottle.