Editor’s Note: These whiskeys were provided to us as review samples by Barrell Craft Spirits. This in no way, per our editorial policies, influenced the final outcome of this review. It should also be noted that by clicking the buy link towards the bottom of this review our site receives a small referral payment which helps to support, but not influence, our editorial and other costs.

Ah, Barrell Craft Spirits. What more is there to say about you? You consistently churn out quality blends of interesting, usually cask-strength spirits. I met you when you did whiskey and now you also do rum. I wonder what your rum is like. But this here is a whiskey lifestyle site and so let’s delve into the bourbon offering.

Based in Louisville, Kentucky, Barrell has been around since 2013 and differentiates itself by sourcing and blending casks from established producers and bottling them. This isn’t unusual in Scotland but it’s not quite as common in the U.S.

The thing about Barrell—and I say this often—is that once one of their whiskies is gone, it’s gone. It’s not like picking one whiskey that’s your favorite, that has an established mash bill and a known producer, etc. While that means sometimes we shed a tear when one of our favorite Barrells is out, it might also mean that there’s another quality release just around the corner. 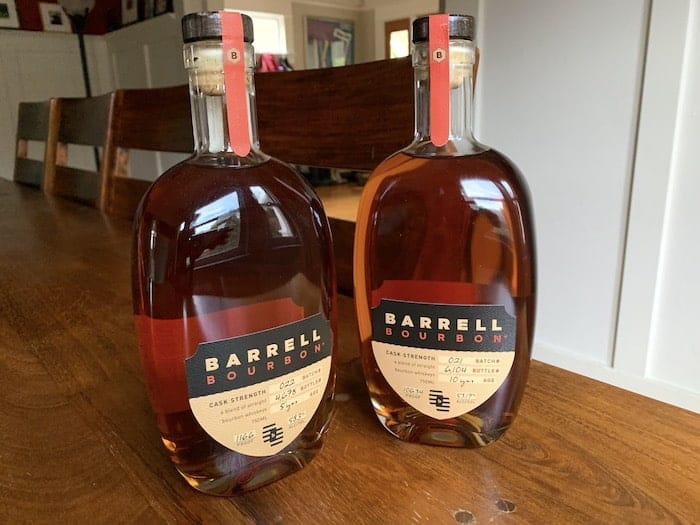 Vital Stats: A blend of 10-year old barrels from Tennessee, Indiana, and Kentucky, as well as 18 14-year-old barrels. A mash bill of corn, rye, and malted barley. 106.3 proof. Aged in American White Oak. Crafted and bottled in Kentucky. About $90. I tasted Bottle #6,104.

Nose: Wet tobacco, dampened wood like in an old slightly moldy house but not like gross, more like an interesting place to explore. Pencil shavings. But also, dried blueberries and honeydew melon.

Palate: Deeply caramel, with some fire at the end. I’d suggest drinking this with some ice or water. It’s pretty hot. It starts sweetly…and ends up straight burn. I don’t mind that but if your mouth isn’t made of asbestos like mine, you might reconsider. Typical of Barrell, it’s high-proof. This tastes high-proof but it certainly doesn’t mean it’s tasteless. The second and third and fourth and fifth sips lend it less fire and allow more of the melted chocolate and caramel to come out. But I’d call it more sweet and less dry. Think hot gingerbread cake.

Final Thoughts: It’ll hit you hard and it’s unashamed. I actually feel like this tastes younger than 10 years. I like this, but I wanted to like it more than I did.

Vital Stats: A blend of 5-year-old straight bourbon barrels distilled and aged in Kentucky and Indiana. Aged in American White Oak. A mash bill of corn, rye, and malted barley. 116.6 proof. About $90. I tasted Bottle #4,678.

Appearance: Lighter than its predecessor. Sand at sunrise. A slight greenish tinge—again, this is compared to its immediate sibling.

Palate: See, I actually like this one better than #21. Even though it’s younger it seems more mature to me (let’s not bring up dating) Despite being more alcoholic, it’s less fiery. It doesn’t have the complexity of the one that’s aged longer, but it also doesn’t have its unpleasant fire (again, I get the whole dating analogy, thanks). This is deceptively drinkable. This will knock you on your ass. It’s subtle. Proceed carefully.

Final Thoughts: Am I going to reach for it all the time? No. But I would probably pour myself a belt of this on a tough day (there are a lot of those lately) if I want to forget the world.