Editor’s Note: This whiskey was provided to us as a review sample by Barber Lee Spirits. This in no way, per our editorial policies, influenced the final outcome of this review.

Back in 2017, I was lucky enough to sample the Barber’s Single Malt whiskey: It was one of my favorites. Before whiskey, Barber made wines, and I loved this rye’s wine provenance and how, for a single malt, it tasted well-blended and refined. As Barber’s first whiskey, it was released in 2016 after two years of aging, and sold out in weeks. I can see why.

Well, luck came around again, because it’s 2019, and I got a bottle of the Barber Lee Spirits Single Malt Rye to try. Notice an extra name there? It reflects the partnership of entrepreneur Aaron Lee, who had tasted the Barber whiskey, was impressed with the Barbers, and was looking to start a legacy business for his family. In 2017 they joined up, creating Barber Lee Spirits.

Between then and now, the Barbers and Lees established their distillery in a 1910 brick warehouse in downtown Petaluma, California. No longer would they have to rely on friends to make it, using the Barber’s wine tanks and equipment at friend’s breweries to make the mash, and then other friends’ copper pot stills to distill.

The good news (for us imbibers) is that their rye is just as painstaking as it was: Even though any rye legally can be labeled as such if it’s at least 51 percent rye, Barber rye remains 100 percent rye, even though it can be more difficult to work with.

Would it live up to what I remembered? I was excited to find out. 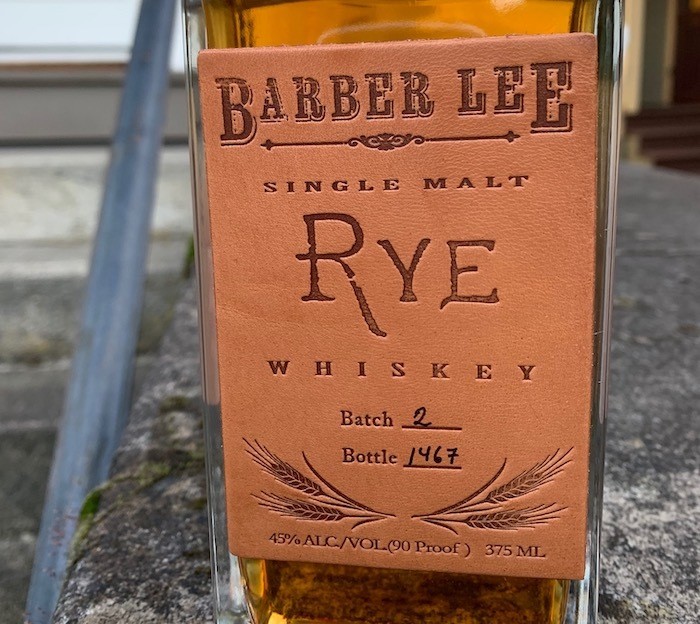 Appearance: There is definitely a depth to this. It’s orangey red, robust in the glass. Sometimes color in the glass can vary wildly compared to what’s in the bottle. This one does not. Is it because it only comes in 375 ml? Maybe.

Nose: Honestly, as soon as I opened the bottle, before I even poured, this scent came wafting out. That implies it’s strong. And it is powerful, but not in an ethanol-ey way. More like it can’t wait to escape the bottle and tumble into your glass. Like someone who you can’t resist interrupting–because you want to always keep talking to them.

And it’s complex on the nose: It smells a little like rye grain, but like a sweet rye. Like you took freshly toasted rye bread and spread a thin layer of that Trader Joe’s cinnamon roll spread atop it. I also get stone fruit: Nectarines, peaches. And slightly toasted sesame. Dessert mochi.

Palate: This is spicier than the last batch I tried. It is a little more prickly, or tingly. It keeps you on your toes. It’s not too cinnamon-like or harsh, but it packs a light punch. This doesn’t hit you over the head. It starts out sweet, but finishes warm and spicy.

I like my whiskey neat but I think this might be a case where if it’s a little overwhelming for you, you might try a couple drops of water or an ice cube (but not the big ice cube, you don’t want to dilute it too much). It definitely isn’t shying away from the spice.

Barber Lee has done it again. I’m happy about that. Is it as good as the last batch I tried? Not quite. But this is just about there, and I have no doubt this is a quality product I’d like to have for a long time.

It’s definitely a rye. It makes no secret of that. But it is, I think, how a rye is supposed to taste. Some spice, some pepper, almost like a carbonation as you feel it warm the center of you. It’s not honeyed, like a bourbon. It tingles less the more you sip it, but it doesn’t let you forget what it is. It’s alive and vivacious.