Editor’s Note: This whiskey was provided to us as a review sample by Balcones. This in no way, per our editorial policies, influenced the final outcome of this review.

If you’re a fan of Shiner Bock beer, there’s a better-than-average chance you’ll appreciate Texas Bock whisky, too. The connection between the two, after all, runs deeper than a Texas-sized marketing gimmick.

Spoetzl Brewery, based in Shiner, Texas, sent Waco-based Balcones Distilling its proprietary yeast, the grain mashbill it uses for Shiner Bock and contacts for its grain suppliers. The result is a limited release available this summer in Oklahoma and Texas. Sit down with a Shiner Bock and a pour of this whisky, and you’ll definitely taste the resemblance.

The first time I pulled the cork on the Texas Bock, I arranged a socially distanced tasting session with professional beer reviewer Andre Meunier. Andre brought six-packs of Rogue Dead Guy Ale and Shiner Bock, and I showed up with bottles of Rogue Dead Guy Whiskey and the Texas Bock. We warmed up with the two Rogues, giving ourselves practice sussing out similarities between related products. (Both, in this case, made by Newport, Oregon-based Rogue Ales & Spirits.)

This isn’t a Rogue review, though, so I won’t bother with our thoughts on those first two. When we were finished, we cleansed our palates with snacks and water, talked brewing versus distilling and then settled back down to try the Shiner Bock and the Balcones.

Unlike the Rogue products, the Shiner Bock and the Texas Bock aren’t made in the same facility. If anything, though, we decided the sibling resemblance was stronger with this second pair than it had been with the first.

When you pour them side-by-side, even the amber coloring of the Shiner Bock and Texas Bock is similar. But it’s after that that you realize how truly complementary they are. In the nose and in the mouth, both are sweet and refreshing – if not particularly complicated.

Shiner Bock has long fit a niche in between mass-produced (cheap) beers and the burgeoning world of craft brew. Texas Bock, it seems, is tailor-made to fill the same kind of a niche among the brown spirits. It’s a significant step up from your bottom-shelf whiskies, but comes in at a price point that makes it more affordable than a lot of the whiskies farther up on the rack.

Whether you drink it alongside Shiner Bock or not, this is a solid, mid-range whisky. 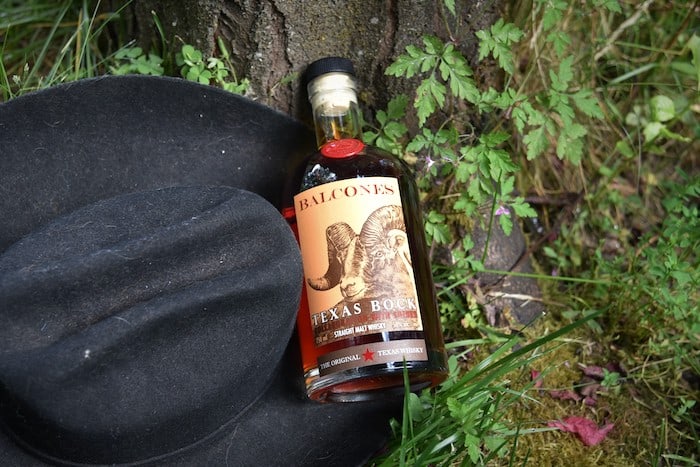 Palate: Sweet; malty; a little smoky; hints of orange peel and maple bars; you really taste the Shiner Bock roots on the finish.

The sweetness here shouldn’t really work. There’s a lot going on, and it could become cloying. Befitting a good Texas whisky, though, it’s downhome and comfortable and unpretentious – and almost forces you to relax and enjoy it, despite yourself. For the price, if you happen to be in Oklahoma or Texas and can get it, you could do a lot worse than a bottle of this juice.