As we mentioned in November, the Baker’s label—named for Baker Beam, grand-nephew of Jim Beam and a tenured distiller who worked at the Jim Beam Distillery for 38 years—is one of Beam’s premium whiskey labels. Created in 1992 by Master Distiller Booker Noe, Baker’s transformed into an exclusively single barrel bourbon in 2019. Even with that, Baker’s kept its age of seven years and its proof of 107.

The new Baker’s Exclusive Selection, however, is “extra aged” for 11 years and 8 months. And the mash bill, according to Breaking Bourbon, is 77 percent corn, 13 percent rye,  and 10 percent malted barley.

All that said, however, as Baker’s puts it, no two barrels are the same, which means that if you like this single barrel, enjoy it, because it’s not getting replicated. Will we long for this once it’s gone? Or will we sort of shrug and reach for the next pour? Let’s find out. 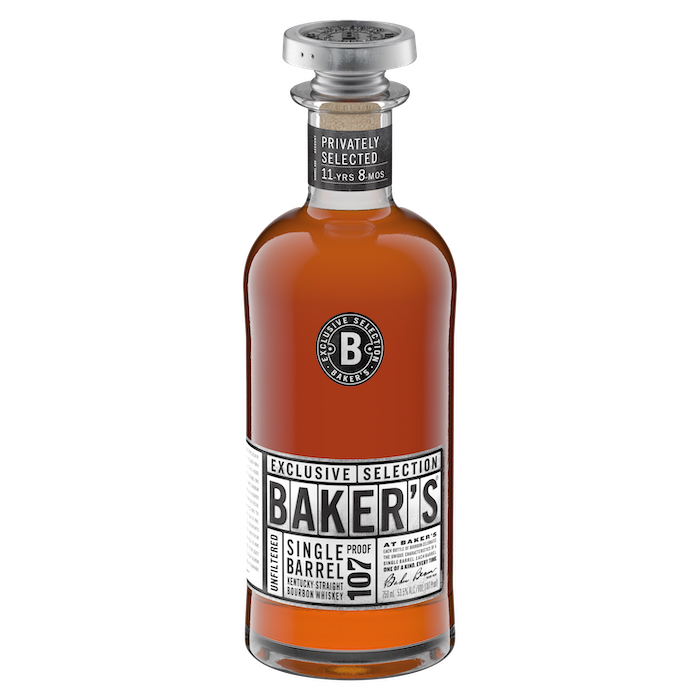 Appearance: This whiskey leans toward the more orangey side of things: new penny copper, filtered apple cider. It is the color of rust, if rust were shiny.

Nose: Cue contented sigh. So nice. They know how to make a bourbon smell of all the things you love about bourbon. It’s got that old library scent: vanilla, aged paper, cherry. And I get fruit, but fruit with additional sweets, like a bag of chocolate-covered mangoes. Also, those little squares of chalk used for playing pool. This is pleasant; it reminds me of the game room in my grandparents’ apartment building, where I used to sneak as a kid into when senior conversations got boring.

Palate: Oh, darn. Cue slightly annoyed huff. The nose is more engaging than the palate. This tastes a little flat to me. I appreciate that lean toward dry and not sickly sweet, but the nose indicated a depth of flavor that doesn’t follow through on the palate. It tastes far younger than its 11+ years. I get some ginger ale but there’s a bitterness to it. In fact, it tastes like ginger candy that’s gone off a little. At 107 proof, it doesn’t taste of high-alcohol but it doesn’t have as much flavor as I expected.