Editor’s Note: This whiskey was provided to us as a review sample by Backbone Bourbon. This in no way, per our editorial policies, influenced the final outcome of this review. It should also be noted that by clicking the buy link towards the bottom of this review our site receives a small referral payment which helps to support, but not influence, our editorial and other costs.

Conversations about whiskey can often lead to a predictable next topic: “What sort of cocktail would you make with that?” While it can be very fulfilling to express yourself creatively by inventing new cocktails, the unfortunate reality is that it is often not a practical next step. The issue is often the same thing that stands in the way of the rest of our hopes and dreams: It’s not very cost effective.

The math on this is pretty simple. Cocktails are generally spirit-forward and require several ingredients, as well as more of the spirit than a single pour. If you’re running a bar, there are many spreadsheets and formulas that will help you factor in the other ingredients, overhead, and R&D – and all of these add up to sticker shock. At your home bar, the same holds true. That bottle will be gone before you know it, and depending on how your R&D went, sometimes your money literally went down the drain.

Since people love cocktails, some whiskeys are being released specifically with cocktail intentions in an attempt to be included on more drink lists. Backbone Bourbon is carving out its own niche with a focus on high proof sourced whiskeys. Proof and age are two major factors in determining the retail price of a whiskey, so Backbone Bourbon has formulated their Prime release as a blended bourbon, meaning that at least 51% of the blend is straight bourbon of different ages. It also includes a combination of straight rye and sometimes wheat whiskey, although the batch I’m reviewing doesn’t include any wheat whiskey. They also add a little of their “old” light whiskey to boost the strength and complexity.

A high proof and accessible $30 MSRP makes it exceedingly cocktail friendly. In that light, I am going to evaluate the whiskey neat, plus make an Old Fashioned cocktail with it to get a sense of how it performs in the mixing glass. 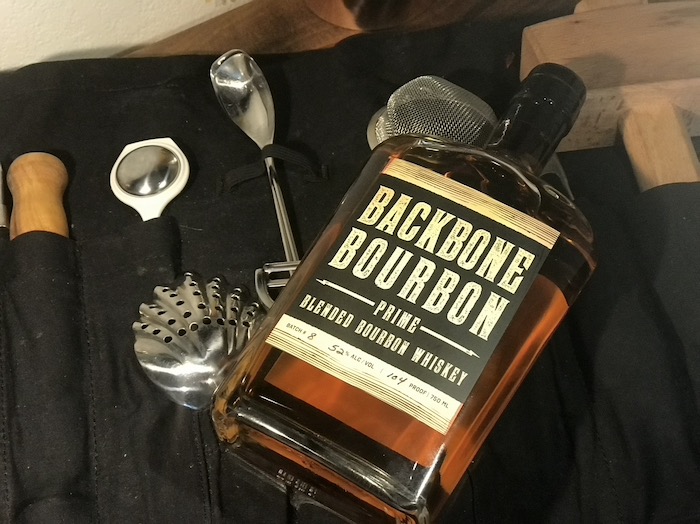 Nose: Mild and warm smells of baking spices, vanilla, and hints of citrus, make you think of the way a kitchen smells when a cake is in the oven

Palate: The spice sensation is pleasant, not overwhelming. A tannic, grapefruit-like mouthfeel sends this drink on to a long finish with a hint of licorice at the end.

This whiskey is definitely more than the sum of its parts, and it makes for a pleasant surprise. As a straight sipper, it’s a warm and spicy treat that, though you wouldn’t pick out all the time, would be a treat on a cloudy day or a great addition to a cozy fire. As a cocktail, it’s surprisingly smooth. I made a traditional Old Fashioned, and while there was a noticeable difference in using a blend, the heat of the proof held up nicely and worked well. I would think something this strong should also work well in a boulevardier.