With six years of limited edition annual releases, Angel’s Envy keeps bringing us unique and special expressions rich in flavor and body. While they are just starting to play around with different barrel finishes like sherry, for their annual special release they stick with what started it all for them – the rich complexity of a an ex-port barrel finish.

Unlike their normal release, these cask strength special editions take the already heavily aged whiskey and continue to mature them even longer in their finishing barrels. Wes Henderson, Co-Founder and Chief Innovation Officer of Angel’s Envy said in a prepared statement that out of “every 100 barrels or so, we find one that truly stands out. We’re always looking for those special barrels to put through our extended finishing process.”

If you’ve had one of the previous year’s releases already and don’t think you need to try this one, remember that not only do the flavor profiles of each barrel vary, but so do their aging conditions from year to year. As Henderson also said, “You don’t set out to do better each year, you set out to do different each year.”

Th 2018 version of Angel’s Envy Cask Strength bourbon is of 12,000 bottles, a number that sounds high when you compare it to their first release in 2012 of only 600 bottles. When you think though about how many people love this whiskey it will still be hard to find a bottle after just a short while – especially after people start tasting it.

While a regular bourbon barrel (known as an ASB – American Standard Barrel) is around 53 US gallons, Angel’s Envy is aged in sees its final maturation in port pipes which hold nearly three times as much liquid. With a little bit of arithmetic we can speculate that the initial 2012 release was from a single Port pipe barrel yielding around 600 750 mL bottles, which means the current 2018 release would be a blend of around 20 barrels. 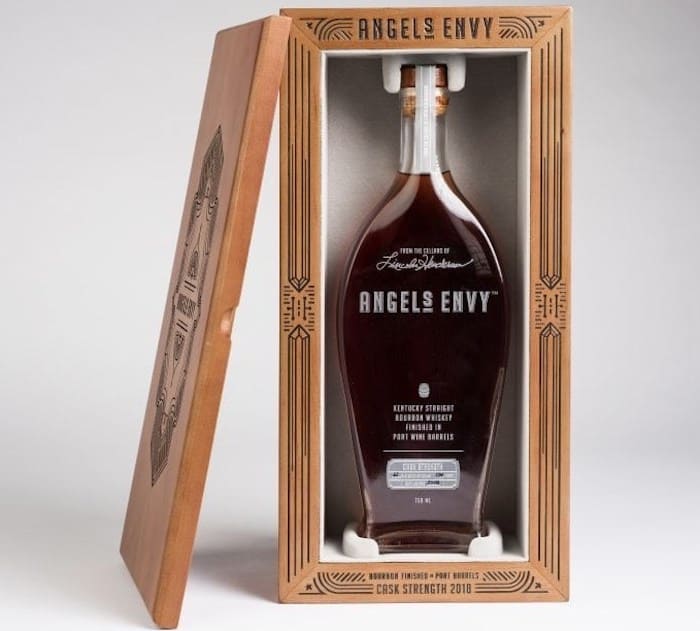 Vital Stats: 124 proof, port finished bourbon. Angel’s Envy is typically a mash of 72% corn, 18% rye, and 10% malted barley and aged for up to seven years, although these special releases go through an extended finishing process. Estimated price for one of these beauties, around $200.

Appearance: This year’s release is presented in an intricately carved wooden box with art deco lines reminiscent of The Great Gatsby. The liquid has heavy and deep browns tones that draw you in with just the slightest red hue around its edges.

Nose: Spiced plum dominates the nose with black fig and sticky molasses following right behind. These strong, somewhat overpowering aromas make fishing out subtleties extremely difficult, but after a few minutes some soft cedar and desert sage peak through.

Palate:  This is cask strength, so without dilution you are hit with a wave of woody spices, apple cider, and saltwater taffy all at once. The alcohol lights up the outside edges of your tongue leaving everything tingling as the sweet but still spicy finish starts to appear. As the warmth travels down your throat a slight bitterness appears to help balance the rich sweetness it started off with.

Cask strength or not, dilution or not, this is a lot of flavor. While some prefer nuance and subtlety, this whiskey demands center stage and plays every instrument it can as loudly as possible. Thankfully it manages to pull it off and the music, turned up to 11, is pleasing to the ear and sweet to the tongue.