When I began writing the review of High West’s Distillery’s A Midwinter Night’s Dram, I started thinking of the line, “To sleep, perchance to dream,” and then realized that was actually from Hamlet—not a Midsummer Night’s Dream, which is course is what this whiskey’s basically named for. Regardless, any whiskey which wraps around literary references is of course a natural fit. Artists—especially writers, I believe, are all mad.

And I support that.

(“Though she be but little, she is fierce!”)

As we reported way back in 2014 and again in 2017, Park City, Utah’s High West Distillery is Utah’s first legal distillery since 1870. It puts out a number of fine spirits including American Prarie Bourbon and Rendezvous Rye (one of my favorites). Located at 7,000 feet above sea level—what I like to call ski level—it’s also described as the world’s only ski-in distillery. That’s all well and good, but what’s up with this particular whiskey, A Midwinter Night’s Dram?

It’s a seasonal release blend of rye whiskies: We’re now up to Act 7, Scene 5. This mash bill is described as a blend of straight ryes, broken down even more as 95% rye, 5% barley malt from MGP, and 80% rye. 20% malted rye from High West Distillery (HWD). They don’t specify the ratio. It’s aged for six years in both Port and French Oak barrels and isn’t chill-filtered or carbon-treated. 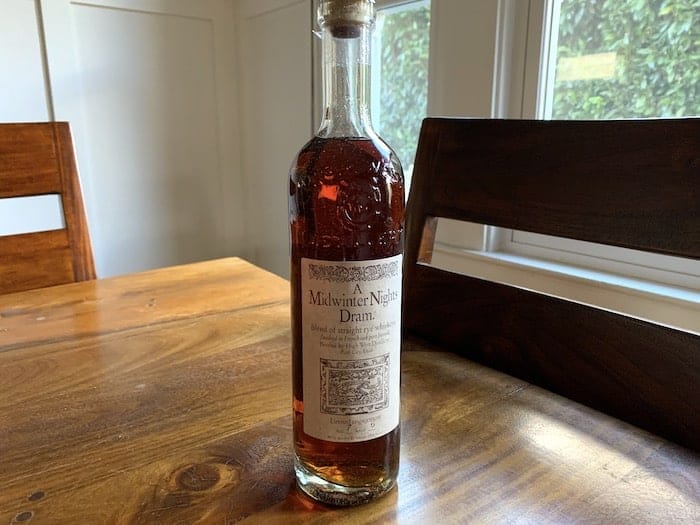 Nose: Oooh, this is desserty! Enticingly sweet and beckoning in the glass. Has the depth and richness of a bourbon, I guess maybe that can be attributed to its aging style. And actually it has a slight whiff of raisins, like Port does. But not too much, because raisins are disgusting. Actually, on subsequent sniffs, it’s more like red currants. Which is better, altogether.

Palate: Oooh, I’m liking this. A lot.  As Shakespeare also wrote, “The lunatic, the lover, and the poet, are of imagination all compact.” This is a well-tended whiskey. Although it is not quite as after-dinner delight as the nose would have you believe and there’s a bite to it which I’m attributing to its 49.3% alcohol, it is balanced, with a sweet kick at the finish. It’s very drinkable, and substantial. Sometimes something drinkable is almost too light and easy to quaff, like it is there for thirst only–think very cold, shitty beer at a sporting event. This isn’t that.

This whiskey finishes different than it starts—the course of true love never did run smooth, after all—but the whole ride is enjoyable. I have been lucky enough to taste some really great whiskies lately and for that I’m quite appreciative, especially in this day and age when one can’t just duck out to a bar.

I feel like this had the capacity to be sort of weird. Blending several different whiskies can get muddled and cloudy and barrel finishing isn’t always 100%successful in my book, but this comes together really, really well.