Editor’s Note: This whiskey was provided to us as a review sample by 10th Street. This in no way, per our editorial policies, influenced the final outcome of this review. It should also be noted that by clicking the buy link towards the bottom of this review our site receives a small referral payment which helps to support, but not influence, our editorial and other costs.

Additionally, we have previously reviewed this whiskey, as mentioned below, with a reviewer who is not a big peat fan. As a one off experiment we got another bottle of it and gave it to a Scotch loving reviewer to see how he would like it.

Growing up in Small Town America, we all learned about whiskey. Unfortunately, what we learned is that it was firewater you gulped in quick, burning shots. My teenage self would take a pull, try to avoid grimacing and then say something like “smooooth” – which made my friends laugh because they knew it was anything but.

I was well into my 20s, and a legal drinker, before I woke up to the fact that whiskey (and whisky) could be something else entirely. The dark spirits could express the same level of art and artistry as any food group in the hands of a great chef. I also learned there is a wide variety of types and tastes when it comes to whiskies. The whisky pour that changed my world: A 10-year-old Laphroaig I grudgingly accepted during a gathering at historic Gadsby’s Tavern in Virginia.

Smell it, then sip it slowly, I was told. And I did, wanting to look more sophisticated than I felt. The result caught me completely by surprise. The nose on the Laphroaig put me in a sensory bubble, exploding my palate like no food or drink had before and blocking everything else out. By the time I sipped the whisky, and ordered a second, I was a convert. Nectar of the gods, indeed.

So I was weaned on Islay Scotch, you could say. I couldn’t have described it well at the time, but the Laphroaig punched me in the mouth with a fistful of peaty smoke. There was seaweed in there, maybe some salt and black pepper. This was big, muscular whisky and it changed my perception of distilled spirits entirely.

It’s also, I’ve learned in the years since, the type of whisky that even whisky drinkers often dislike. They find it overbearing, lacking nuance and just a big, ol’ peat bomb. One friend described a peat-forward, smoke-heavy single malt I was raving about as being akin to chewing on a piece of charred firewood.

So there’s that. Peat’s not for everyone.

Which brings us to 10th Street Distillery in San Jose, California. This young outfit, founded in 2017, is importing Scottish peat for its own line of peated whiskies. “We stick to Old World tradition for our boldest, smokiest whisky using all-copper stills, imported Scottish barley and age it in bourbon barrels,” according to the tasting notes for the Distiller’s Cut Peated Single Malt. “This Scottish-American fusion hints of citrus and berry while delivering a woody, earthy and smoky statement.”

Sounds promising to me, but, again, I like smoke and peat. My Whiskey Wash colleague Carin Moonin, a far more experienced reviewer than I am and the owner of a sharply refined palate, recently tried the Distiller’s Cut and concluded with this: “I appreciate that this whiskey exists, but I cannot appreciate it.” For her, it was just too much.

So now I’m going to give it a go. Call it a Whiskey Wash experiment. Give a peated whisky to two reviewers: One who is a fan of big peat and another who isn’t so much. Compare notes, and readers can decide which kind of palate – and review – they find most helpful. 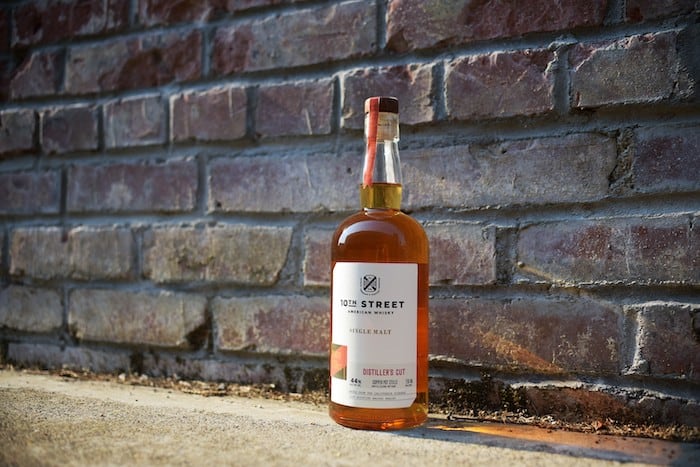 Nose: Carin Moonin’s response in this category was, “Peaty! Peat, peat, peat! I opened the bottle, and the peat slapped me in the face. Peat!” I can’t really argue with that assessment. This is like opening a bottle of liquid smoke. Where I differ with Carin is that I like it. The slap in the face makes my mouth water, and evokes the peaty Scotches I love so much. In any case, you’re definitely dealing with a peat bomb here. Also leather, wet earth, decaying vegetation.

Palate: This is a blunt-force instrument hitting you in the mouth. I taste sea water, salt, driftwood, baked pears and cinnamon. The flavors fade quickly, and don’t stick around for much of a finish. I also get a dry mouthfeel, like I want a glass of water immediately after.

I haven’t tasted an American single malt that aimed so ambitiously for the Islay experience before. It has the peat, the smoke, the sense of dark rocks and rough seas. But it lacks the nuance, the little things that make a great peaty Scotch a great peaty Scotch. The 10th Street Distillery website calls the people behind this whiskey “engineers,” and the Distiller’s Cut does feel engineered to create a specific experience. That’s not necessarily a bad thing, and I applaud their pluck.

The problem they’re going to face is that for $65, you can get a number of peaty Scotch single malts from well-known and long-established distilleries. (Including the Laphroaig 10 that made me fall in love with peaty Scotches all those years ago.) The novelty here is California, and what they’re trying to pull off with a brand-new distillery. I look forward to seeing what they go on to produce in the years ahead.