Editor’s Note: This whiskey accessory was provided to us as a review sample by R.O.C.K.S. This in no way, per our editorial policies, influenced the final outcome of this review.

R.O.C.K.S. Whiskey Chilling Stones are beautiful little pucks hewn from granite and intended to chill your spirit of choice (but, as the name implies, they expect that choice to be whiskey). You rinse the rocks, place them in their special hardwood tray, tuck them in the freezer where they rest overnight and drop to the standard ambient temperature of zero degrees Fahrenheit. You then use them to cool off your favorite liquor with no dilution.

Well – and I expect I’m not alone here – I am not typically one for my neat spirits chilled, hailing from the person-living-in-the-world camp of ‘you can taste more layers when things aren’t cold.’ However, I’m also in the rarely-turn-down-a-challenge camp, so I knew I’d find a way to reliably review the stones. 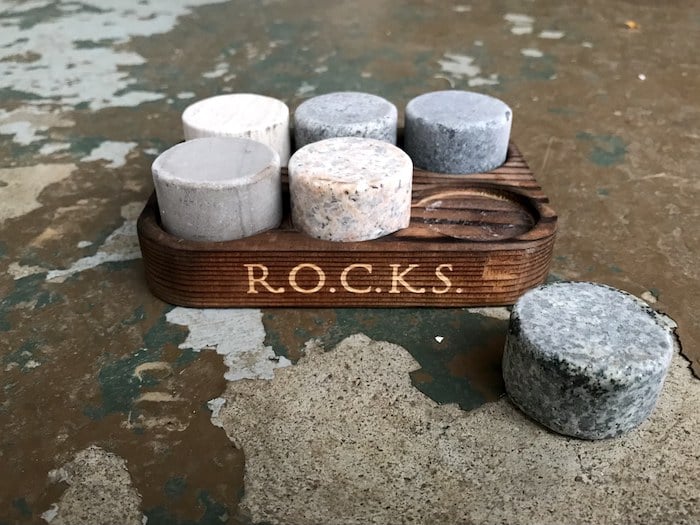 According to the brand, their creation was “inspired by the Scottish. Cold river stones were cleaned and used to cool down whiskey while on the road. Scots also did not like their whiskey diluted with water, therefore using natural stones.” This was news to me, and made me wonder whether anyone writing the marketing copy for R.O.C.K.S. has ever skimmed the surface of whiskey traditions, or indeed drunk the stuff.

Finally it dawned on me. What do I like cold? Cocktails! How can I see if the stones work? Perform an experiment!

(Full disclosure: I am not a thermodynamic scientist, but I do own a digital thermometer.)

So, I made two manhattans in one beaker, stirring the cocktails to minus three-point-five degrees Celsius (Dave Arnold, feel free to chime in and tell me why my drinks can’t get that cold, and that my equipment is shoddy), and divided the drinks among four glasses, two matched sets. I put one R.O.C.K.S. (R.O.C.K.?) in two and one ice cube in two (each roughly the same volume as the stone). My accomplice and I then proceeded to measure the temperatures and enjoy the cocktails, trying to consume them all at the same rate.

I discovered that after a few minutes, the drinks with stones were four degrees Celsius warmer than the iced drinks. Then five degrees warmer. Then six. The iced cocktails maintained a colder edge even after the ice had melted.

That made me ask: were the R.O.C.K.S. doing anything at all?

After a few minutes, I measured again, and found the stone-chilled cocktails had but a point-three degree Celsius lower temperature. After ten minutes, there was no difference in the temperatures.

Well, maybe I was asking too much. After all, these drinks were below zero – how did I expect a tiny rock to maintain that? Then I knew I had to try what they wrote on the box: just adding one stone to my favorite liquor.

So I did. And this is what happened: I poured two ounces of whiskey straight from a bottle into two glasses, and placed a stone in one of the glasses. The rock took off about three-and-a-half degrees Celsius as compared to the completely neat pour. The difference just registered on my lips.

Overall, I find these really are only good for making it look like you have slightly more whiskey in your glass. Their impact on temperature is negligible.

Shares
689
Views
Share on FacebookShare on TwitterGet Our Newsletter
Cheers to the Dads! Personalize a bottle of his favorite whiskey to create a modern gift for the modern man. Use code: FATHERSDAY20 for $20 off your next order of $100 or more at ReserveBar