Editor’s Note: This cocktail kit was provided to us as a review sample by Heaven Hill. This in no way, per our editorial policies, influenced the final outcome of this review.

Call me a traditionalist, but I generally drink whiskey neat. I might add a little water to proof it down at times, but that’s about as wild and crazy as things get in my house.

One of the downsides of this approach is that I’m a terrible mixologist. Cocktails, for the most part, baffle me and are beyond my ability to make well. Friends remind me of this every year when we have a Kentucky Derby watch party and I make batches of mediocre mint juleps. At this point, mediocrity is part of the tradition. 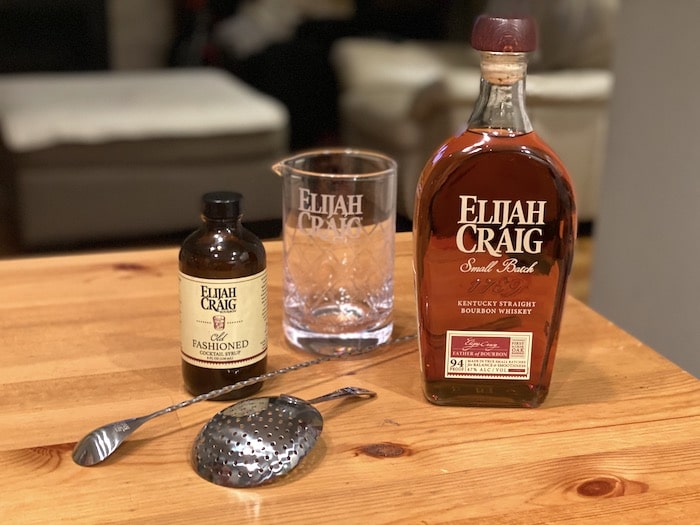 So on New Year’s Eve, my wife – not much of a whiskey drinker – was happy to see me using Elijah Craig’s pre-made cocktail syrup to make old fashioneds. I didn’t have to make my own simple syrup, didn’t need bitters and, theoretically, couldn’t mess the drinks up too much.

Heaven Hill Distillery, which produces Elijah Craig, provided an 8-ounce bottle of the cocktail syrup to The Whiskey Wash for review purposes. To give it a fair shake, I picked up a bottle of Elijah Craig Small Batch Bourbon at my local liquor store to go with it.

The cocktail syrup sells for $12, although you can sometimes find an Elijah Craig gift box that includes a bottle of bourbon and the syrup for less than $30 combined. At the recommended dosage, you’ll get 16 old fashioneds out of a single bottle of syrup.

The recipe on the side of the bottle suggests 2 ounces of bourbon and half an ounce of the cocktail syrup, mixed with ice and garnished with (your choice) an orange peel or a maraschino cherry. I went with the cherry.

The good news is that it really is idiot proof, if you follow the directions. The better news is that it’s pretty good. The Elijah Craig bourbon went nicely with the syrup, and we enjoyed old fashioneds all evening until we rang in the new year.

The flavor is maybe a little sweeter than you’d get in a bar, but my wife thought that was a positive. I don’t usually like sweet drinks, but it wasn’t syrupy enough to bother me in this case. It tasked like you expect an old fashioned to taste, and the bourbon came through with gusto.

Whether you want a pre-made cocktail mix is really a personal preference. If I were having a group of people over, once we’re allowed to host groups again, having something like this would certainly help me make a batch of drinks quickly and easily. The price point is low enough that I’d be happy to pay it for a party situation, though I might not keep it around the rest of the time.

Bartender and mixologist Jeffrey Morgenthaler reportedly worked with Elijah Craig on this particular cocktail mix – it says so on the bottle, in small type. So I’m just left with one question: Is he available for my Kentucky Derby party next year?

40
Shares
10k
Views
Share on FacebookShare on TwitterGet Our Newsletter
Cheers to the Dads! Personalize a bottle of his favorite whiskey to create a modern gift for the modern man. Use code: FATHERSDAY20 for $20 off your next order of $100 or more at ReserveBar