Editor’s Note: This whiskey was provided to us as a review sample by Backbone Bourbon Company. This in no way, per our editorial policies, influenced the final outcome of this review. It should also be noted that by clicking the buy link towards the bottom of this review our site receives a small referral payment which helps to support, but not influence, our editorial and other costs.

They say art imitates life, and vice versa, creating an intriguing cycle of styles, tastes and popularity. The late 1960’s in America was a time of radical change in our society, and that included alcohol consumption trends. The popularity of bourbon and whiskey was fading, looked on as “your father’s drink.” Mixed drinks using gin and vodka were coming into fashion, with the help of a certain fictitious suave Englishman’s penchant for a shaken vodka martini.

In response to changing trends, the bourbon and whiskey world began making and marketing light whiskey, higher in proof, lighter in taste, and easier on the palate than its forefathers. Today we see the trends change yet again. When Americans watched Don Draper and the rest of the mad men sip whiskey in the office and old fashioneds at lunch for seven seasons, the whiskey and bourbon beast came roaring back to life. With greater access to information and the history of whiskey and bourbon featured in bars across America comes curiosity; People are once again discovering light whiskey.

That is not to say that by any means, trends are determined by fictitious male characters with bespoke suits and expensive haircuts. I can recall one of my first few shifts behind the stick as a wide-eyed baby bartender. I had studied and prepared, poured over recipes, equipment, and mixers, and felt prepared for any order. Then it happened. A patron at the bar asked me for a “Cosmo.” As I flipped through the rolodex of recipes in my brain, I drew a blank. I had to respond with, “I’m sorry, I’m not familiar with that one.” She exasperatedly threw her hands in the air and exclaimed with great disbelief, “Haven’t you seen Sex and the City?!” I had not. She proceeded to describe its color and her guessed ingredients, and I realized she meant a Cosmopolitan, which at this point I had only read about. But I have always kept that interaction in mind, with the thousands of ‘Cosmo’s I have made since, that people like to drink what they see on the screen.

I’m not the only one keeping tabs on modern trends. Enter the people from Backbone Bourbon Company, purveyors of Triple Down Light Whiskey. The number 3 is significant to this expression in that it’s the third type of whiskey they procured, it’s their third project using this type of whiskey and it’s their third single barrel offering. The barrels were also held in lot “333” for their last few years, which is the impetus for all the numerical significance. The light whiskey barrels they came upon had some uncommon characteristics associated with them: They have a very high corn mash bill, a very high proof, they’ve been aged in used bourbon barrels as opposed to new, and they’ve spent a long time in those barrels compared to other American whiskey 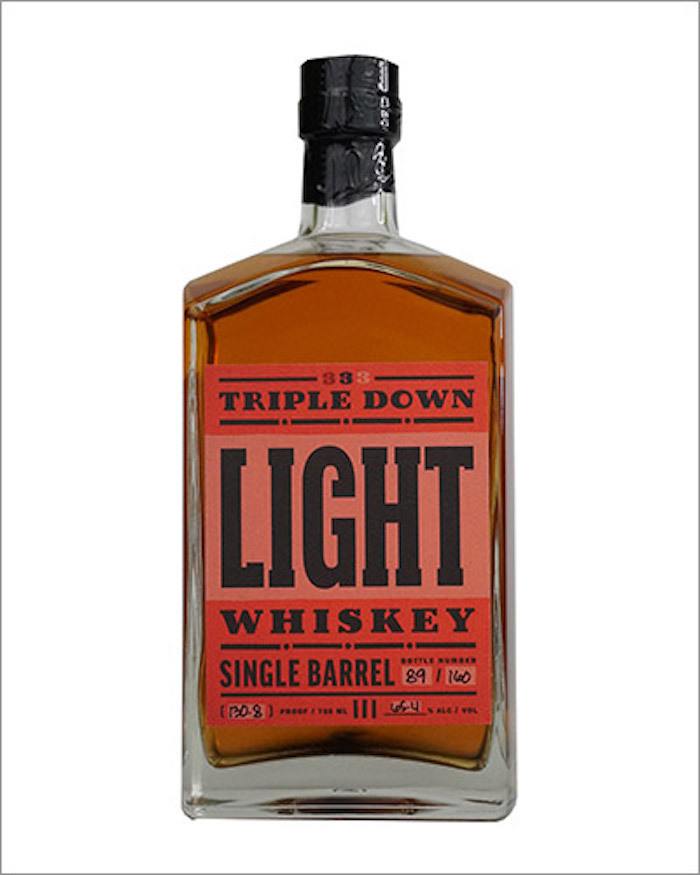 Appearance: Noticeably lighter than most whiskeys. Bright and flaxen on top, blending into a bright buttery yellow in the bottom of the glass

Nose: Obvious corn and ethanol and a hint of confectionary, with a pulled sugar sense and quality

Palate: Well-balanced sweetness and heat, plus a definite corn flavor but with a hint of bubblegum, makes you think of a road trip through corn country with a bag of Big League Chew.

The whiskey drinker in me appreciates this for what it is: sweet and lively, with a little touch of personality. The bartender in me sees something fun to riff on new ideas. A little bit goes a long way, but I can see the potential of ending up somewhere unexpected. I’m thinking of some flaming coffee drinks when the weather turns cool again, just in time to curl up and catch up on what they are drinking on whatever streaming service I am currently subscribed.