Heaven Hill is back again with another release of Parker’s Heritage. What started as just an annual pick from their retired distiller has become a remembrance of the late distiller Parker Beam. He was diagnosed with ALS in 2010. Heaven Hill began contributing a portion of the proceeds to research in fighting ALS a few years later. You can get many details on these elements in our past reviews and press releases of the Parker’s Heritage line up.

The 15th edition of Parker’s Heritage is the third in a series of whiskeys aged in heavily charred barrels. This year’s edition is a Kentucky Straight Wheat Whiskey with a mash bill of 51% wheat, 37% corn, and 12% malted barley. According to Heaven Hill, this is only the second time this mash bill has been used for a Parker’s Heritage release. It was blended from 75 barrels aged for 11 years.


Let us discuss how barrel aging works. There are many factors that go into how a whiskey interacts with the barrel it is in. And a good distillery controls as many of these factors as they can. The main elements are how the barrel is prepared, time, and weather. I’ll get into the barrel below. Time and weather go hand in hand. A barrel works kind of like a lung. The wood expands as it gets hot soaking in the whiskey. As it gets cold it contracts and releases the whiskey back into the barrel. So for many distilleries, areas like Kentucky that experience extremes in weather allow for an ideal aging process. There are some that go the opposite route and make climate controlled rickhouses like the ones at Bentley Heritage – they keep one of theirs set to match the weather of a town in Scotland as they prepare their single malt.

In preparing a barrel a distillery will char the inside, but what does this do? There is a solid explanation in an article on Vine Pair. But the basics are three things; change the flavor the barrel provides, create a filtration system within the barrel, and increase how deep it penetrates the wood. Charring breaks down different parts of the oak, converting the hemicellulose to flavors of caramel and brown sugar, the lignin to flavors of vanilla and spice, and reducing the effect of the oak lactones that give flavors of the oak and toasted coconut.

By charring the wood as long as Heaven Hill is for this bottle they create a layer of carbon, or charcoal, that acts as a filtration system during the aging process. The heavy char also helps to increase the amount of wood the whiskey is exposed to. It creates a cracked, uneven texture in the barrel, actually providing for increased surface area as well.

I appreciate the three releases showing the influence of the heavy char barrel on the different mash bills. But I am left lacking interest in this current release. This wheat whiskey falls short from some of the highlights of the Parker’s Heritage line, such as 2018’s that was finished in curacao barrels. It is the nature of one off releases that not all of them will be winners. 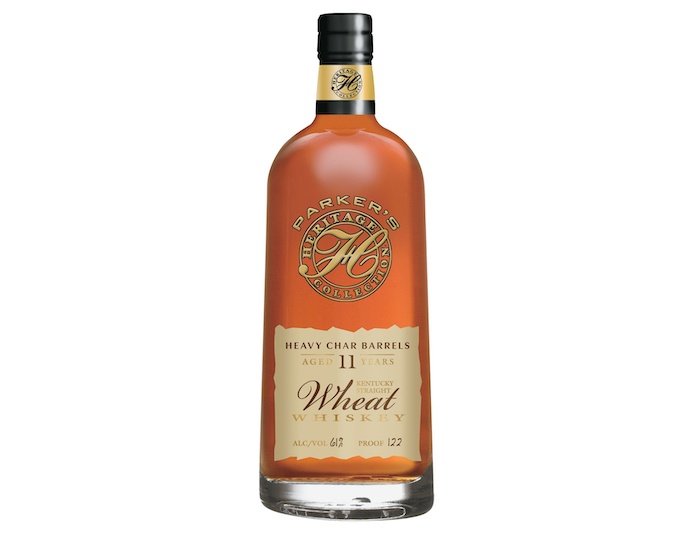 Appearance: It is a clear light red ale color with a rusty copper hue.

Nose: Smells of brown sugar, maple, and toasted oak right up front. Little hint of cinnamon in there, as well as some dried cherries and apricots.

Palate: This is oily and dry up front with a bit of heat. As it coats the mouth it subtlety tastes like a cinnamon roll, but I feel this is me reaching for something more than the heat. This moves to a finish that is heavily oaked with black pepper and a little lemon zest. It has a burn that is just at my limit of pleasantness and sits with you for a decent amount of time. The addition of water brings out a sweeter front to the palate with flavors of caramel and pastries. The mid palate has a touch of black pepper and a heavy tannin that carries into the finish.

This is a mediocre release for Parker’s Heritage. Water helps it a long, but I found it did not even come close to the rich flavor of the 2019 rye release. And lacked the experimentation of the 2018 curacao finished release. The wheat mash bill just doesn’t hold up to the heavy char. Not unpleasant, but not something I think worth the effort of finding a bottle of.