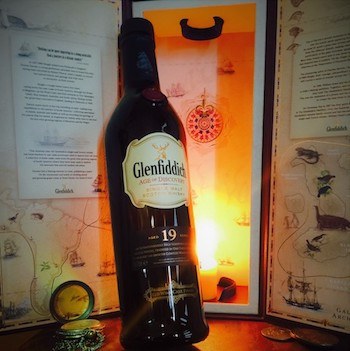 Released for the Glenfiddich’s travel retail Age of Discovery series, this 19-year-old single malt Scotch whisky was given a red wine cask finish. The box looks like some sort of antique itself, loaded down with quotations about Old Mutton Chops himself (Charles Darwin).

The Age of Discovery Red Wine Cask Finish was created to commemorate the 1831 voyage of the HMS Beagle, which traveled to South America so Darwin could pick up fossils and specimens. These helped him to document his theory of evolution. Indeed, the full title of his famous book is printed on the box of whisky: On the Origin of Species by Means of Natural Section, or the Preservation of Favored Races in the Struggle for Life.

Glenfiddich produced three 19-year-old expressions in this range: one that was fully matured in bourbon casks (my personal favorite), one that was finished in Madeira wine casks (my least favorite), and this Red Wine Cask Finish (currently under review).

For me, red wine finishes tend to be really good or really bad. I prefer to know what sort of red wine casks have been used. In this case, we’re given a variety to ponder. There are oak casks which formerly finished malbec, merlot, and cabernet sauvignon. How’s that for a cornucopia of different finishes all blended together into one big batch?

Historically speaking, Glenmorangie paved the way to fruity cask finishes with its Sauternes finish. Yes, it’s true the resulting core range whisky was a tad too sweet for my palate. But my girlfriend’s nose, as well as her palate, approved wholeheartedly of the succulent richness from Glenmorangie’s Sauternes finish (which can only be found at auction these days). In stores, Glenmorangie has switched gears to selling Quinta Rubin, which is finished in Spanish port pipes.

The Quinta is a bit heavy for my taste, or the better half’s. This said, my gal really does appreciate Glenfiddich Age of Discovery Red Wine Cask Finish. In fact, I’ve already promised to give her my bottle, after I’ve finished writing this review.

Appearance: Shimmering gold in color. The legs display nice “lacy” beading consistent with a fine old dram. I hereby dub them “Goldie Hawn Legs” – not to be confused with “Golda (Mier) Legs,” which are commonly found in mugs of barley wine.

Palate: The oak kicks things off with some white pepper and allspice. At this point, sweet nothings come rolling down the tongue. There’s raspberry, lemon ginger, and clotted cream (that’s gone a bit rancid). A pronounced graham cracker note emerges near the finish, and then the oak spices take over again.

The length of the finish is medium. Not too long, not too short. For me, the rancid cream note is hard forget. Why? Because it reminds me of whisky that I drank in my early 20’s–some of it Glenfiddich 12 Year Old–which wasn’t (and still isn’t) my style of dram. A hint of brooding distillery character haunts the finish of Age of Discovery Red Wine Cask Finish, along with spicy European oak, as well as some fruity-sweet notes that brighten the corners. Alas, these parts do not a whole make.

Believe it or not, I prefer the 19-Year-Old in front of me to Glenfiddich's OB 18 Year-Old. The nineteen is more complex and satisfying--even though its younger cousin has a longer and a drier finish. With a bit more oomf, both drams would come out ahead. Forty percent ABV is rather low, unless one is drinking a really mature single malt...say, up over thirty years of age.

As for the Darwinian theme of Glenfiddich's Age of Discovery Red Wine Cask Finish, it's worth pointing out that Darwin's biggest tome was entitled, The Descent of Man. The most striking aspects of this work examine how people could be managed through forced migrations, starvation, the strategic application of pandemics, and weapons-based genocide.

This afternoon, I enjoyed sipping Glenfiddich's Age of Discovery Red Wine Cask Finish outside on my backyard deck, while watching jets fly over the metropolitan skyline, to and fro, as they experimented with geo-engineering techniques. It took me a while to finish looking over the rather complex box art. As time went by, an azure blue sky was transformed into polluted haze, but that didn't stop me from pouring one more drink from the bottle.

For the whisky drinker who enjoys superb packaging, and a somewhat limited, middle-aged Scotch, I can recommend the Red Wine Cask Finish. Otherwise . . . save your gold doubloons.