McConnell’s Irish Whisky, it is said, once enjoyed great popularity in the U.S. from the late 1800’s right through the early part of the 20th century until Prohibition sent it into hard times. Noted as well for reportedly being the oldest whiskey brand ever to come from Ireland, having been founded in 1776 by two brothers, John & James McConnell, it is now making a comeback to the United States after over 90 years of dormancy.

The McConnell’s brand, according to those behind it, went quiet after its Belfast-based distillery closed in 1958. It has been brought back by Conecuh Brands, who is working with Great Northern Distillery to recreate the whiskey while a new distillery is being built “in the historic, Crumlin Road Jail, in Belfast, Ireland. The Crumlin Rd. Jail is not far from the original distillery site on Cromac St. The ‘Crum’ is well known for housing political prisoners from the 1840’s to 1996, before being converted into an iconic tourist attraction. Once the building is complete, the new distillery will house production, aging, a visitors’ center and a retail area.”

“We’re resurrecting one of the greatest global brands of all time, McConnell’s Irish Whisky,” said Roy Danis, President & C.E.O. of Conecuh Brands, in a prepared statement. “The opportunity to recreate a brand with such rich and deep history has been incredibly rewarding. My entire team is so excited and humbled at the same time.” 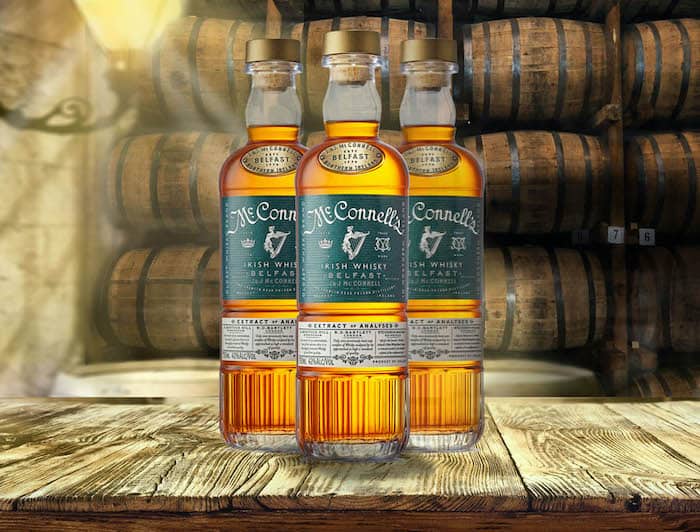 What will appear in bottle for the time being is a five year old blended Irish whiskey that was aged in American oak barrels. It packaging consists of “a bottle shape inspired by a simple pill capsule, which harkens back to the original label, featuring three references from Doctors, who recommended the whisky and used to prescribe it for medicinal purposes.  The label is signature green with a handsome metal plaque that reads J.&J. McConnell’s, Est. Belfast 1776, Ireland.”

As it stands now plans call for McConnell’s to be bottled at 42% ABV and to price around $33. Very limited official tasting notes suggest “a robust, smooth, whisky with hints of vanilla, nutmeg and other spices.”