Editor’s Note: This whiskey was provided to us as a review sample by New Liberty Distillery. This in no way, per our editorial policies, influenced the final outcome of this review. It should also be noted that by clicking the buy link towards the bottom of this review our site receives a small referral payment which helps to support, but not influence, our editorial and other costs.

The Kinsey Straight Wheat Whiskey and its sibling, the Kinsey Chardonnay Cask, hung out in our house for a while before I got around to tasting them. It has been a long couple weeks—who am I kidding, it’s been a long ~ 20 months. Regardless, how did I sleep on these? They are from Philly, like me, and I apologize to my Pennsylvania brethren for not getting to these sooner, if only for the shoutout opportunities. Tastykakes! Cheesesteaks! Cream cheese!  (Okay well I only really like the first one but it doesn’t matter.)

The Kinsey brands are part of Philadelphia-based New Liberty Distillery, which was founded by Rob Cassell. When we wrote about him back in 2018, he was in the midst of simultaneously getting New Liberty in Philly as well as an Irish distillery, Connacht Whiskey Company, in Ballina, Co. Mayo, off the ground. (The two distilleries are not financially connected.) New Liberty was established in 2014 and has been championing the revitalization of Pennsylvania whiskey, as Craft Spirits writes.

And as we have reported before, New Liberty was also inspired by the days of long ago when rye was the most popular spirit in the U.S. and spirits were distilled with local grain: Their whiskies include local grain from a farm located only 25 miles from the distillery. New Liberty’s Kinsey brand provides the nod to some whiskey history: American whiskey reportedly began in Pennsylvania—not Kentucky or Tennessee—where Kinsey was born in the 19th century.

The first I reviewed of their two new offerings, Kinsey Straight Wheat Whiskey was pot distilled and aged for two years in newly charred American oak. The mash bill is 73% wheat and 27% malted barley. It’s 95 proof. Unfortunately at this time it’s only shipping to Pennsylvania, but you can also pick it up at the distillery if you happen to be in the area. 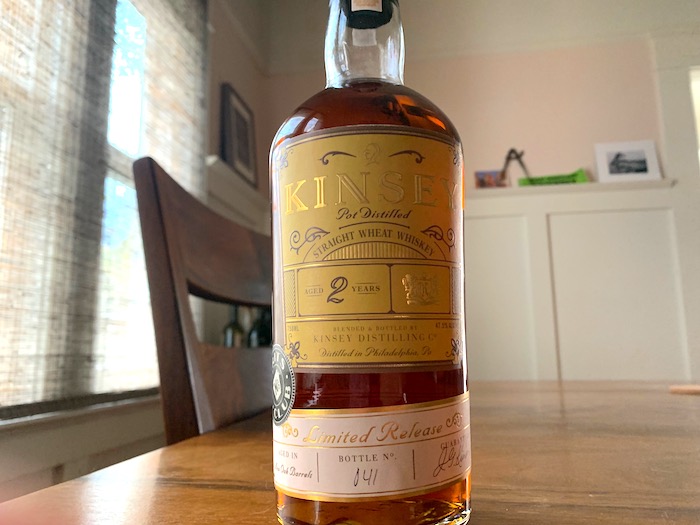 Appearance: Rich and pretty in the glass. Newly polished copper, shiny like a new bar top with the light shining on it in just the right way. It makes me think of an old, stately bar where you’re meeting up with your true love and you marvel about how cool the bar is and how happy you are together.

Nose: This took a few moments, because it’s extremely subtle. And then I get vegetal, like a smell of turned earth. Tomato plant leaves. Ripe pears. This smells like walking through a garden in a late summer evening, just after sunset.

Palate: There’s no burn and at 95 proof, I’m surprised by that. A lot of whiskies taste like heat and alcohol. This does not. I do get a lot of the wheat essence from this, like a soft, plush wheat bread, like fresh out the oven, all hot and pillowy with a pat of butter slowly melting into its top. This whiskey brings a similar sense of comfort. It actually has flavor. It has a body. But it’s not too much, It’s just right. Like the perfectly toasted piece of toast that has a slight firmness on the outside but a yielding interior.

It tastes like it has been aged a hell of a lot longer than 2 years. I think this tastes awesome, and it’s not just because of the Philly connection. It’s because it's an excellent whiskey.