Editor’s Note: This whisky was provided to us as a review sample by Suntory Group. This in no way, per our editorial policies, influenced the final outcome of this review. It should also be noted that by clicking the buy link towards the bottom of this review our site receives a small referral payment which helps to support, but not influence, our editorial and other costs.

For a long time, Hakushu 12 has been one of the entry points for North American drinkers who wanted to try Japanese single malts. Like Hibiki Japanese Harmony, also made by Suntory Group, the Hakushu was a consistently good whisky that had other important attributes: It wasn’t wildly expensive, it could actually be found on the shelves in many areas, and it has a distinctive bottle that highlights its Japanese heritage.

But with Japanese whisky popularity soaring in recent decades and stocks of aged whisky dwindling, Suntory stopped releasing Hakushu 12 in the summer of 2018 – apparently reserving the limited quantity of single malt it had for special releases. This year, mercifully, the 12-year and its classic green bottle (with a label made from Japanese Echizen paper) is back on the shelves.

The first thing you have to know is that this is a peated Japanese single malt. If you don’t like peated Scotches, you might want to steer clear of this one, too. If a little smoke and a little peat brings a smile to your face, though, then this might be a whisky to consider.

Suntory said this year’s Hakushu will be released in limited quantities, but that it expects to be back with more full releases in future years. 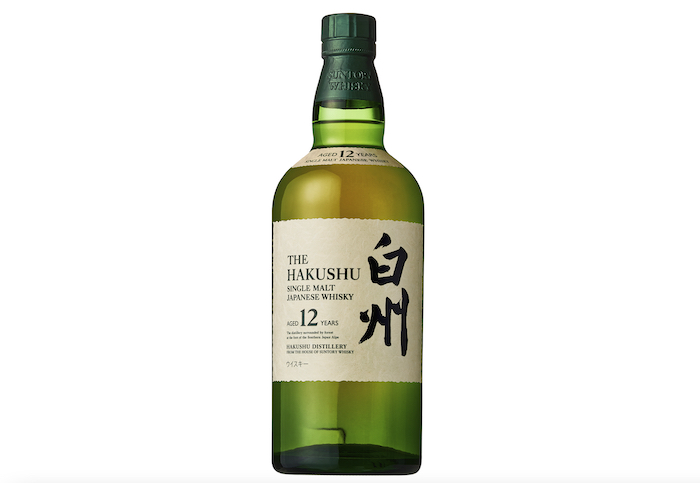 Vital stats: Mash bill of 100% malted barley; aged 12 years; 86 proof/43% alcohol by volume; limited release in 2021; about $82 for a 750ml bottle if you live in a price-control state, but expect to pay significantly more in other states or on the secondary markets.

Appearance: Golden and light, reminiscent of wet straw. Medium legs on the glass.

Nose: Woodsmoke and the earthiness of peat hit you in the schnoz as soon as you open the bottle, so there’s no question this is a peated whisky. The magic is in the honeyed essence underneath the smoke and peat, however. This whisky made my mouth water as I thought of a crisp bite of apple on a fall day. Also orange peel and burnt, buttered toast.

Palate: Whereas the first smell was strong and pungent, the first taste is easygoing and gentle – which might be partially attributable to the low alcohol content. I taste dried dates, parmesan cheese with a drizzle of honey, and, oddly, bacon-wrapped smoked pork. (That’s not a sentence I ever expected to write, or combination I ever expected to enjoy together.) The finish is medium long, which is where the spices come to the fore. The Hakushu eases into a relaxing blend of cinnamon and lemon zest.

The Hakushu Distillery sits at the foot of 9,700-foot-high Mount Kaikoma, and Suntory likes to call it the “Forest Distillery” for its natural surroundings and nearby spring water. I don’t have a large enough sample size to say yet whether that terroir, to use a wine term, makes an identifiable difference in the whisky that gets bottled. What I can say is that I enjoyed this single malt and am glad to see it back on store shelves in the United States. The price point, if you don’t live in a control state, might be a lot to swallow. But the whiskey itself isn’t; it’s smooth and easy and a nice port of entry into Japanese whiskies.