Editor’s Note: This whiskey was provided to us as a review sample by Glendalough Distillery. This in no way, per our editorial policies, influenced the final outcome of this review. It should also be noted that by clicking the buy link towards the bottom of this review our site receives a small referral payment which helps to support, but not influence, our editorial and other costs.

Irish whiskey has been a big business game for a long time, to the extent that in the 1970’s production was limited to just one company (Irish Distillers) running the only two operational distilleries: New Midleton and Old Bushmills. The 1980s saw the return of the Cooley Distillery, and then in 2010 Kilbeggan was reopened. The long process of Irish whiskey’s return led to a boom in the spirit that is still going strong today.

But it’s only been in the last ten years or so that craft Irish whiskey is returning to the scene. Glendalough Distillery was one of the first of those new craft producers. The distillery was started by five good friends to celebrate both the Glendalough Valley itself and the tradition of Irish malt whiskey – though they have since expanded to other types of whiskey and gin.

The lore of St.Kevin plays an integral part in the brand. St.Kevin doesn’t have enough documentation for true historical accuracy, but we know that in the sixth century he abandoned society for Glendalough to live as a hermit. He lived a life of moderation with strong connections to the natural elements around him, and eventually drew in others and formed a monastery.

The logo on the bottle face is the saint himself, based on an old story. According to the legend, St.Kevin stood dead still with his arms outstretched while a blackbird built a nest in his hand. He remained in that position until the eggs laid in the nest hatched and flew away. This story also inspires Glendalough’s motto of “Stand Apart.”

Glendalough’s portfolio includes both whiskey and gin, as well as poitin, the Irish precursor to whiskey. The ages of the two single malt whiskies denote historically important numbers in the journey of St.Kevin, while the gin celebrates the local botanicals. The double barrel expression is a single grain whiskey, aged in both ex-bourbon and ex-Oloroso sherry casks. 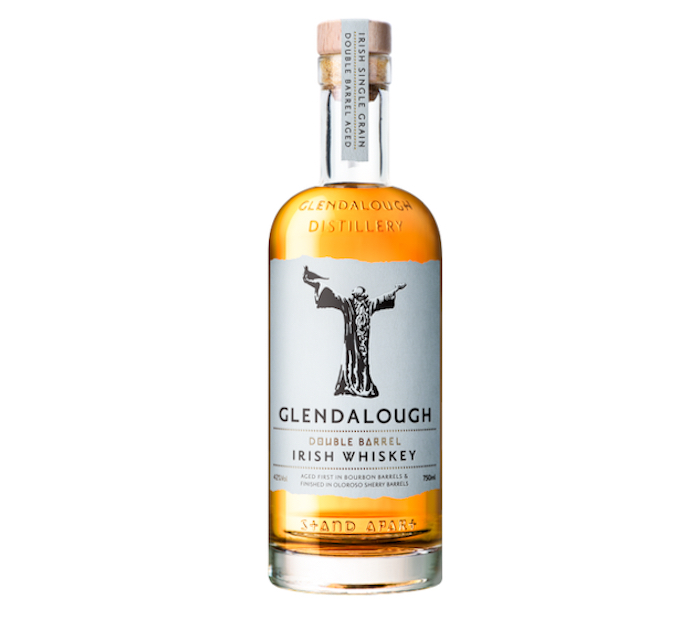 Nose: Sticky, rich, cloying sweetness. A little tropical, like date cake. A burnt sugar note prevails over the top. Revisiting the nose after a few sips brings a bit of musk to the aroma.

Palate: Light in texture, and begins worlds away from what the nose would have you believe. Spiced pears are the first note I get, with the spice lingering past the fruit. The mid palate tastes a bit rummy, leading into a sweet finish much more reminiscent of the nose. A bit of butter and vanilla add to that flavor. Finishes fairly quick and almost a tad bitter.

Personally, I love single grain whiskies, but I think I really think they need some age on them to really shine. This whiskey was perfectly fine, if a bit sweet and light for me. For a newer, small craft distillery in Ireland, it should definitely be considered an achievement. One important thing to note is the absolutely phenomenal price point for a product that does come across as polished and well-crafted. Glendalough Distillery has other interesting products that I would absolutely would love to try, and I will be interested to see what other releases they have in store for the future.