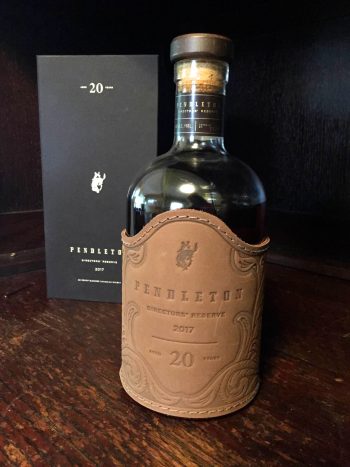 Popular imported Canadian whisky brand Pendleton Whisky is bottled by Hood River Distillers (HRD) in Hood River, Oregon. Founded in 1934, HRD is one of the last mid-sized regional distilleries outside of the American South. For a long time, HRD’s spirits were mainly budget-friendly, lower-shelf offerings that ended up in party punches and bar wells, but once in awhile they release something a little more unusual, such as the 20-year-old Pendleton expression called Pendleton Directors’ Reserve.

Pendleton Directors’ Reserve seems to be released to coincide with the Pendleton Round-Up, one of the largest rodeos in the world. It’s held in Pendleton, Oregon, not far from the Idaho border, and during the Round-Up Pendleton Whisky flows freely. This higher end expression is not released annually however, as we previously reported.

Something tells me a lot of champion bull-riders and calf-ropers will be celebrating with a bottle of Pendleton Directors’ Reserve later this month. For comparison purposes in this review I also snagged a bottle of the now hard to find Collingwood 21-Year-Old, another 20+ year old Canadian release, this one being from Brown-Forman. You’ll find my notes on that after the Pendleton below.

Appearance: A deep, orangey amber. The bottle itself is absolutely beautiful – encased in a black sueded presentation box and wrapped in a leather sheath made by a third-generation saddle maker.

Nose: Maybe it’s the power of suggestion, but I get notes of saddle leather, powdery dust, sweat, inexpensive cigarillo, even a bit of warm hay – exactly the cocktail of aromas I’d expect at a rodeo.

Palate: Intense, prickly cinnamon on the entry with a slightly powdery mouthfeel. Some classic whiskey flavors – sweet oak, caramel, vanilla, and a touch of cherry – mingle with a slightly funky undertone: oxidized lemon juice, wet saddle, and slightly bitter ground nutmeg. The smoke in the nose doesn’t really show through on the palate until the end, when there’s a subtle hint of char.

Score: 87/100 [SHOP FOR A BOTTLE OF PENDLETON DIRECTORS’ RESERVE]

I also tasted another super-aged Canadian whisky: Collingwood 21-Year-Old. In North America, maple wood is usually associated with Tennessee. But Collingwood is out to show you you that Canada’s national tree is good for more than just making great American whiskey.

The Collingwood brand is owned by Brown-Foreman. It’s distilled at the same plant in Collingwood, Ontario, that also gives the world Canadian Mist blended whisky. Located on the shores of Georgian Bay in Lake Huron, Collingwood is proud of the fact they use Great Lakes water to make their whisky, as well as their unusual approach to finishing. Collingwood 21-Year-Old, like the standard Collingwood blended release, is matured in used white oak casks. After full maturation, the whisky is then finished in a vat full of toasted maple staves.

It reminds me, at least in some aspects, of the Lincoln County process used to make Tennessee whiskey. Where Tennessee distillers filter new-make through maple charcoal, this treatment is administered to already matured distillate. It’s said to impart a distinct smoothness and “new dimension of flavor,” and while it may be nothing more than the powers of suggestion talking, I do detect a distinct note of maple syrup in Collingwood 21-Year-Old.

So how does it stack up to the Pendleton Directors’ Reserve? 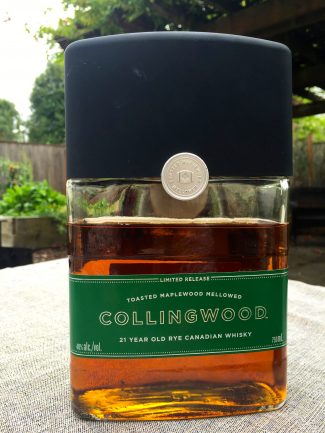 Appearance: Also a deep, orangey amber – almost indistinguishable from Pendletons’ Director’s Reserve. The goofy bottle design is certainly visually commanding, but the mechanics of the bottle leave something to be desired. Prying the big plastic off of the bottle is more of a struggle than it should be, and once you get the second screw cap off, you’re greeted by a hokey plastic flow spout (easily pried out, if you’re so inclined).

Palate: At first, it’s very sweet and butterscotch-forward before a surprising turn towards a more mineral-driven mid-palate: strong oak, dusty and tannic, with a suggestion of chalky Flintstone’s vitamins. It tastes quite hot – hotter than the relatively modest proof suggests. In the lingering finish, there’s a powerful combination of butter, vanilla extract, and maple syrup, just like a pancake breakfast. Overall, the flavor is surprisingly unbalanced: rich in the entry and finish, but thin and aggressive in the middle.

Collingwood 21-Year-Old is quite unusual. The nose is fascinating, dense and intriguing, but for me, the palate falls a bit short. But, if you’re looking for a special-occasion whisky for a dedicated Canadian fan, this could be just the ticket.