Editor’s Note: This whiskey was provided to us as a review sample by 3 Badge Beverage Corporateion. This in no way, per our editorial policies, influenced the final outcome of this review. It should also be noted that by clicking the buy link towards the bottom of this review our site receives a small referral payment which helps to support, but not influence, our editorial and other costs.

In July of this year we wrote about the latest release from Sonoma, California’s, 3 Badge Beverage Corporation: Benjamin Chapman 4-Year Corn Whiskey. In 2020, 3 Badge had released a 7-year Whiskey, which we reviewed.

Unlike the 7-year, which hails from Canada, the 4-year is American-made. Although the brand doesn’t specify where in the U.S. it’s sourced and produced, it cites Kentucky limestone in its pedigree, which “imparts important minerals and acts as a unique filter for the base.” After it’s distilled, the 4-year is placed in oak barrels that have been previously used to age bourbon—but for just two years. The entirety of this liquid is then aged for four years. The mash bill is 80% corn, 11% rye, and 9% malt.

So, ok. This whiskey could come from anywhere from sea to shining sea, but let’s talk about appearances. This is a bottle that’s made for Mad Men, honestly; it’s pleasingly squared and solid and the cork comes off with a pop champagne bottles would envy.

And who was Benjamin Chapman? No one knows. He’s an international man of mystery. Part of the cognoscenti. (I’m pretty sure that’s the only time I’ve used that word in a review…or perhaps ever.) Could he be a shadowy marketing promise conjured in an ad agency’s lab? The product a brand name generator spit out? Again: No one knows.

While I am intrigued by (and a little attracted to) the spiffy fellow this branding tale conjures up, I wonder about the whiskey. My colleague gave the 7-year a shrug, but would the 4-year break out? 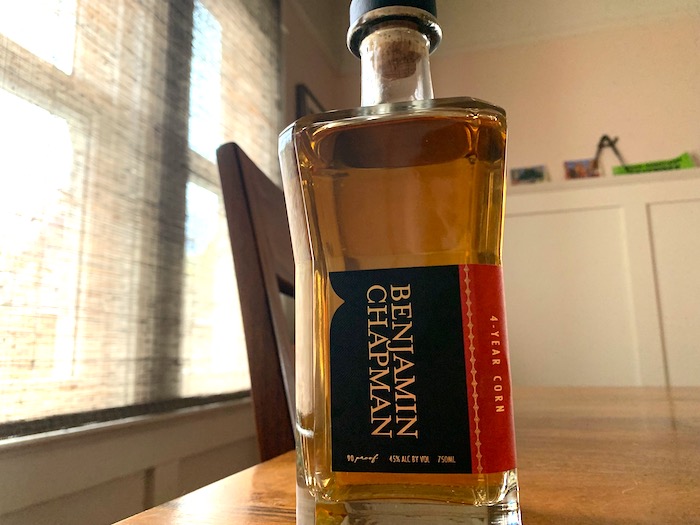 Nose: It does smell lovely, though. It’s sweet, I’m guessing from the high corn ratio in the mash bill, but it doesn’t smell like opening one of those caramel corn canisters the size of a laundry hamper that show up over the holidays. To continue the s’more theme, I get graham cracker, too. And also dusting of powdered sugar, and buttery pound cake.

Palate: Eh. It’s okay. It starts smooth and welcoming; I get fresh berries, a bit of earthiness—think sautéed mushrooms or a full-bodied sake that’s a little earthy. But then a smoky element on the back end shows up like an uninvited guest. It burns too; this tickled the back of my throat and then set it aflame. I would not drink this straight; it comes across hot and grainy. I think the thing I notice most about this whiskey is that it tastes hotter than the proof says, and it’s already high-proof. But if you like mixing your whiskey into something else—ginger ale, tonic, coke—to make a highball, this will be okay, I suppose.

The bottle looks cool, but anyone who has ever done online dating–hell, dating in general—could tell you that looks can be deceiving and it’s what inside that counts. This doesn’t measure up.