Editor’s Note: This whiskey was provided to us as a review sample by Bahnbrëcker. This in no way, per our editorial policies, influenced the final outcome of this review. It should also be noted that by clicking the buy link towards the bottom of this review our site receives a small referral payment which helps to support, but not influence, our editorial and other costs.

If you search for images of New Braunfels, likely it’ll turn up photos of Texans floating in tubes down a wide river meandering through lush parks and circa 1800’s buildings. In fact, this town between Austin and San Antonio with its oldest running dance hall in all the US, made lists of Best Places to Live in 2020. Most original settlers of New Braunfels came from Germany, bringing with them a rich culture of food, drink, dance, and music. With its eclectic German Texan heritage and easy-going swagger, New Braunfels has recently become home to the world’s first Hefeweizen-style whiskey launched by Bahnbrëcker.

Bahnbrëcker, meaning “trailblazer” in German, is a brand founded by country music star Randy Rogers along with friends Eric Chase, Cary Schindler, Ash Wineinger, Michael Devers, and spirits-industry veteran Steve Luttmann. Their inaugural release, Slow River Blend, is a smooth, easy sipper intended to pay tribute to the German and Texan culture of their home town. To do so, they drew on the tradition of Hefeweizen, a hazy, yeasty wheat beer brewed for centuries in Bavaria before becoming one of the premier popular styles in American craft brewing.

For Bahnbrëcker’s expression of a Hefeweizen-inspired spirit, Slow River Blend starts with a mixture of Texan and Midwestern straight winter wheat whiskeys. This whiskey blend is macerated with lemon peel and clove, then aged for three to five years before bottling at 80 proof. Slow River Blend presents a palate of caramel and vanilla balanced by a bright kick of lemon and spice to produce a pleasant, straight-forward, and easy-drinking whiskey. On the nose is an almost pineapple sweetness resonant of Hefeweizen’s distinguishing banana profile as well as hints of fresh sap and warm custard.

Enjoy over ice or as a mixer on a summer’s day, preferably while sausages are sizzling on the barbecue and as a warm-up to dancing at dusk to live music. As Bahnbrëcker suggests, “Slow River Blend is a whiskey that goes down easy, like tubing down the river with a soft breeze on a sunny day.” 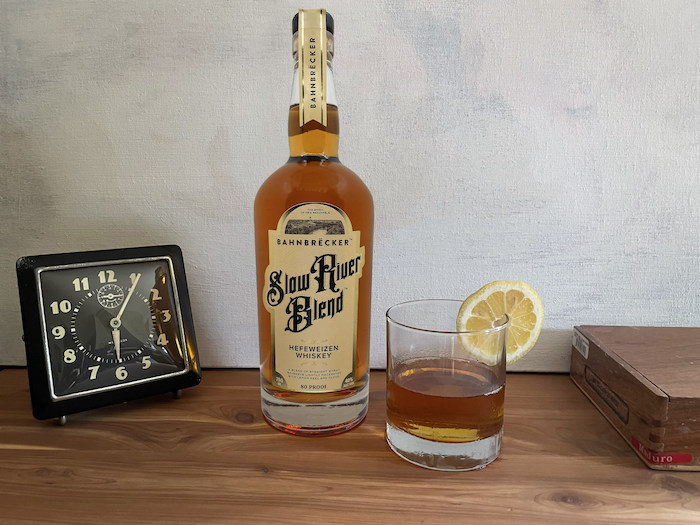 Nose: Tropical fruit sweetness along with hints of fresh sap and vanilla custard.

Palate: Caramel and vanilla balanced with the brightness of lemon and a bite of spice. Smooth finish with residual sweetness.

Life is sweet in New Braunfels, TX and so too is Slow River Blend. Billed as the world’s first Hefeweizen-style whiskey, it leads with a caramel and vanilla sweetness. The infusion of lemon and clove lends a brightness and spice. I would have enjoyed an additional dimension, perhaps more expression of the winter wheat, or something yeasty, a flavor-nod to its German and Texan heritage. Still, enjoyed over ice or as a mixer on a summer’s day, Bahnbrëcker accomplishes what they set out to make: an unpretentious, easy-drinking whiskey. As the motto on their logo reads, “Let the good times flow.”