The rocks found on the Isle of Islay record a time some 700 million years ago when Earth was one giant snowball orbiting space. Fossilized organisms in Islay’s limestone suggests that this rugged and remote island in the Hebrides archipelago off the west coast of Scotland may have once been in the tropics.

As the glaciers retreated, erosion carved craters where water accumulated in low bogs, eventually slowing the decomposition of moss, tree roots, and plant material. Over thousands of years, this process created peat. This form of fossil fuel not only burned in hearths across Scotland, but for over two centuries peat has fired the Ardbeg distillery kilns on Islay’s southern coast.

Traigh Bhan is Ardbeg’s 19-year old single malt Scotch whisky aged in American oak and Oloroso sherry casks. This permanent expression is produced in a single batch released yearly, and with slight changes to cask selection, each batch reflects notes distinct to its own.

Nicknamed “Ardbeg’s lockdown liquid,” Traigh Bhan 19-Years-Old Batch 3 came to age during the global pandemic when closed distillery doors meant uncertainty for its disgorging and bottling. At last, Head Whisky Creator Dr. Bill Lumsden along with a skeleton distillery team released Traigh Bhan Batch 3 from its casks. As described by Ardbeg, “The main difference with Batch 3 is that it has been imbued with an altogether more fragrant, spicy character.”

I couldn’t be happier with the more fragrant expression of wood smoke, pine tar, mineral salt, and satsuma that this dram delivers. The peat-soot nose is earthy, but clean given the proximity of a nectar sweetness and mineral vein. The deeper I breathe it in, the more my nose opens to the braidings of sweet, salty, smokey. Or is it earth, sea, and air? In any case, it’s an amalgam of scents I’m quite fond of.

The palate is surprisingly spicy with a bright cayenne or eucalyptus heat. Light in mouthfeel, the heat flares back across the palate and quickly overpowers initial notes of toffee, fennel, and citrus peel. As with Traigh Bhan Batch 2, added water creates a waxiness that tames the heat and makes possible more enjoyment of the peat and age that Ardbeg has to offer. 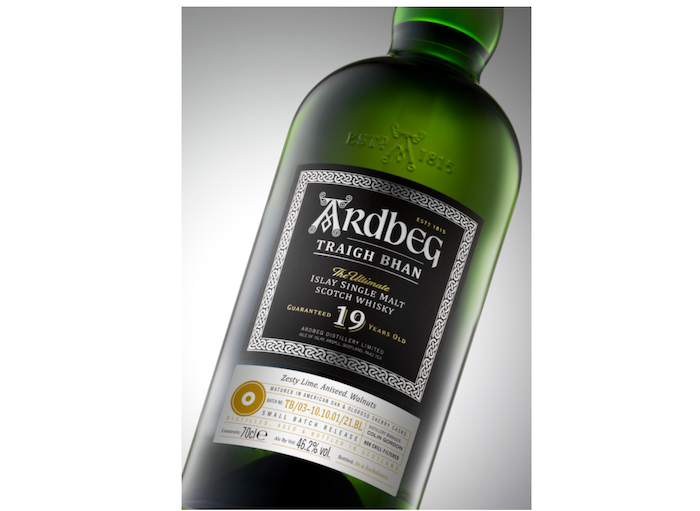 Nose: The nose smells distinctly like braided seine twine. If this is an unfamiliar association, imagine the scent of a beach bonfire. Strong earthy aromas of pine tar, wood smoke, and salty minerals brightened by the sweetness of satsuma, fennel, and floral nectar.

Palate: A hot cayenne or eucalyptus spiciness interrupts the initial notes of toffee, aniseed, and citrus zest. Adding a touch of water creates a waxy mouthfeel that tames the heat enough to taste hints of black walnut, flinty minerals, and sappy tannins.

As fond as I am of the pine tar, smokey-sweet, sea scent of Ardbeg’s 19-year-old single malt scotch whisky, in the Traigh Bhan Batch 3 expression it seems true that where there’s smoke, there’s fire. The spicy heat overpowers the palate and cuts short the subtleties at work on the nose. There is a sense of interruption that comes through, perhaps reflecting its bottling during a global pandemic. While I appreciate Batch 3, admittedly it leaves me longing for a more balanced dram that better expresses the deep time and complex processes inherent to the peat from whence Ardbeg came.