If you’ve ever visited a distillery or drank bottled-in-bond bourbon, you’ve directly benefited from the work of Colonel Edmund Haynes Taylor Jr. Or E.H. Taylor as he’s referred to in the wider world of bourbon. And he is referred to often. Taylor was an instrumental figure in American whiskey, both as a distillery owner and politician.

But what does that have to do with Castle and Key distillery? Isn’t Buffalo Trace the continuation of E.H. Taylor’s distilling operations? Well, the answers are everything and yes.

Taylor’s first distillery was the O.F.C. Distillery that he purchased in 1869. Though it was already a functional distillery, Taylor improved upon the concept and brought in new and more equipment and processes, creating both a better bourbon and an example for future distilleries. Even after selling the distillery to George T Stagg (another familiar Buffalo Trace name), Taylor was running the show.

And then in 1887, Taylor opened his own distillery – the Old Taylor Distillery. Instead of taking over another existing production, Taylor built this one to his own specifications. The aesthetic of this new distillery was every bit as important as the production process, including sunken gardens, a springhouse, and even a castle. And so “bourbon tourism” was born.

After years of being silent and becoming increasingly run-down, the Old Taylor Distillery is back – but don’t call it that. Will Arvin and Wes Murry of Peristyle bought the property in 2014 with the intent to begin distilling again. However, they ended up in court with Sazerac Brands (owner of Buffalo Trace and the Colonel EH Taylor label) over trademark rights. Thus, the Old Taylor Distillery became Castle & Key.

According to Arvin and Murry, “we did not renovate the distillery – we restored it.” Taylor’s original features have been returned to a functional space for visitors, and Castle & Key has kept in that tourism spirit by expanding the amenities offered at the distillery, including a bar, event space, and music series.

Restoration Rye is a nod to these efforts, and is the first whiskey coming out of Castle & Key. This rye is made from “pods” of barrels that are grouped for flavor. The first batch (reviewed here) came out in 2020.

Castle & Key also produces gin and vodka. The distillery is currently open Thursdays through Sundays, and recommends making a reservation to visit due to high volume. Many of the original Old Taylor elements of the distillery can be viewed and visited, as well as Castle & Key’s additions. 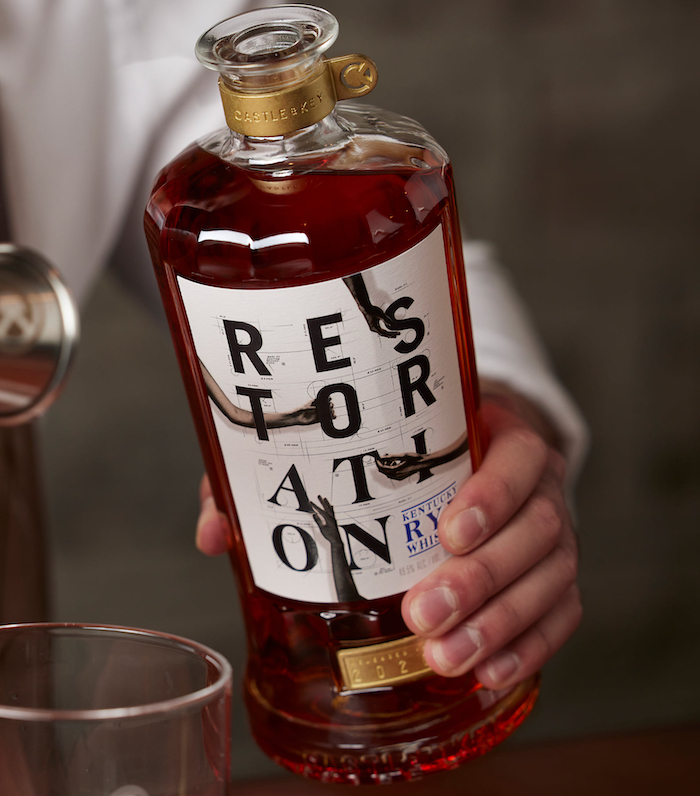 Nose: Chamomile tea leads into the sharpness of green apple and some tangy cranberry.

Palate: Cereal grains are first and foremost, then linger. The finish has some of the bitterness of cruciferous vegetables. Water is needed to bring out the notes of dark chocolate and cherry in the mid-palate.