The Fred Minnick Show: Why Did This 5-Time Grammy Winner Start a Whiskey?

Neil is a professional musician, producer, and film composer with over four decades experience. A songwriter with a back catalog of more than 100 songs and more than 45 million records sold, he has worked with some of the greatest artists in the music industry, including Rick Derringer, Pat Benatar, John Waite, Kenny Loggins, Steve Forbert, The Del Lords, and Beth Hart. His work has produced many Grammy-nominated and Grammy-winning hits, and he holds the distinction of being the first guitar player appearing on MTV. Today, he continues to expand his creative portfolio: in addition to writing new songs for stage and screen, he is writing screenplays for feature films, touring, and reaching out into the community to work with musicians young and old.

Giraldo began his professional career in 1978 as a key member of the Rick Derringer band after competing against 200 other guitarists for the position. It wasn’t long before Rick discovered Giraldo’s piano playing prowess and quickly put those skills to work in the studio for the recording of Guitars and Women. In the spring of 1979, Mike Chapman introduced Giraldo to an up-and coming singer named Pat Benatar who had recently signed to Chrysalis Records. While impressed with the young vocalist, Chapman felt she needed a musical partner who could facilitate the creation of a sound both identifiable and powerful. Over the years Neil has produced some of their biggest hits, including “Love is a Battlefield” and “We Belong.” 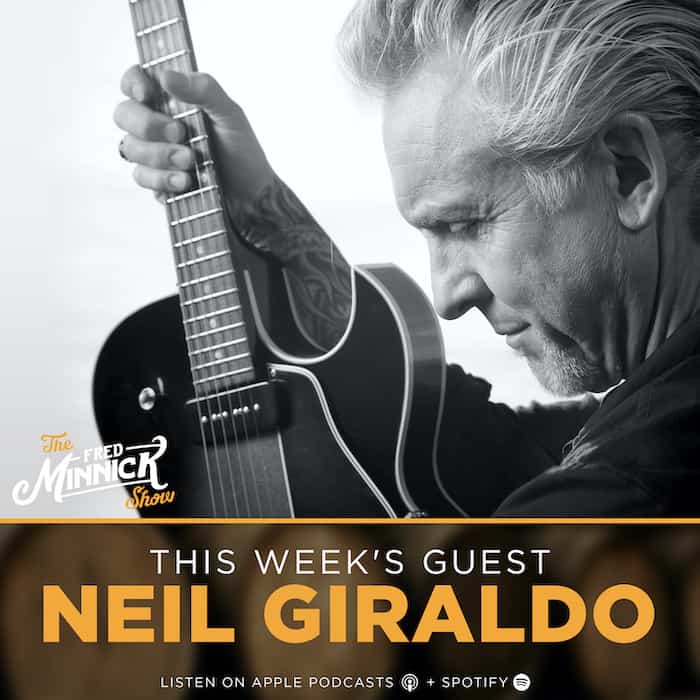 With a back catalog of more than 100 songs written and more than 45 million records sold, Giraldo has written, produced, arranged, and recorded for Pat Benatar, John Waite, Rick Springfield, Kenny Loggins, Steve Forbert, The Del Lords, Beth Hart, The Coors, and others, which included many Grammy-nominated and Grammy-winning hits.

Neil was born in 1955 in Cleveland, Ohio. Immersed in the culture of his beloved Sicilian ancestry, his parents Anthony and Angela instilled the love of music at a young age, giving Neil his first guitar at the age of six, with the hopes that he and his sister, Priscilla, who played the accordion, could entertain family and friends with songs from the old country after church on Sundays. As Neil got older, his mentor, Uncle Tim, introduced him to revolutionary bands like The Yardbirds, The Kinks, The Rolling Stones, and all the other great guitar-driven rock ‘n’ roll bands of the 1960s.

Finding new and innovative ways to shadow path his way into songs, Neil developed a discipline early on of not just playing along to his favorite artists, but creating different parts for himself within those tracks. At the same time, the budding guitar artist also became proficient on piano by continuously practicing along to Chuck Berry (Johnnie Johnson), Fats Domino, and Jerry Lee Lewis records. His interest in percussion instruments soon followed; practicing the drums to Simon & Garfunkel albums, he explored how different rhythms could alter the complexion of songs. These practices and disciplines created the basis for his future success as an innovative record producer and musician.