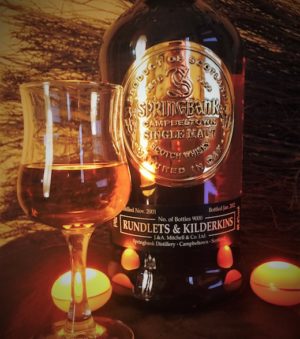 Today, we’re going to examine a bottle from Springbank that harkens back to early 2012. It’s very special, and quite unusual for a J&A Mitchell & Co. release. I’ve been enjoying this whisky for about a week.

And the bottle in question? Springbank Rundlets & Kilderkins. Generally speaking, I like to “cook” (oxygenate) Springers for a good six months before coming to a verdict. In a review like this one, however, I can duplicate that sort of oxygenation, at least to some extent, by giving my open glass plenty of air for ten or fifteen minutes. Sometimes, I cover my glass with a tin, or a circular piece of glass (window), to let the whisky breathe for upwards of an hour.

Upon first glance, most people aren’t all that familiar with a “rundlet” or a “kilderkin.”  Both are very small sized casks (60-80 liters) which have the added advantage of speeding up the aging process, thus imparting more oak influence to whisky in a shorter amount of time.

Yes, it’s true that most of the Springbank in this large batch under review was only aged for ten years. However, because such small casks were used to age some of it, the bottling tastes much older than a mere decade. It also has a more eccentric composition due to a far more intimate relationship with the wood–which, in this case, turns out to be a boon rather than a bane.

I’m not absolutely positive, but judging from the ABV of 49.4%, I’m guessing Rundlets & Kilderkins must be cask strength. In fact, I’d bet my bottom dollar on this assumption. As always with releases from Springbank, the bottle is non chill filtered, with no fake coloring added (E150a).

Appearance: Color is polished mahogany. As expected, smaller, faster legs, along with fairly small “tears,” display characteristics of a whisky older than ten years, although technically I cannot say so because the bottle is NAS.

Nose: I’m enchanted by an unexpected amount of smokiness for a Springer. It almost reminds me of a Longrow. On top of this, I also appreciate the coastal brine, along with farminess evocative of an early Clynelish. Think sun-dried “meadow muffins.”

A delightful Springer “wet wool” note also comes through in spades. I’m not getting much in the way of heavier industrial notes, however. Some more conventional sweet notes are certainly here, gloating in the glass. We’re talking about dark chocolate, croissant, Ceylon tea, penuche, and glazed pecans. Exquisite.

Palate: In some ways, the mouth is a bit of a let-down when compared with such a complex nose. Meadow muffin farminess and wet wool notes are not present, as one finds in Springbank’s Local Barley 16 Year Old, but there is a marine air type of thing happening. Coastal dunnage warehouses strike again.

As a cigar aficionado, I’m happy to report a cigar filler note, along with some antique leather. As in the nose, there are sweet nothings present, but not with the same level of intensity. Expect more dark chocolate, black licorice, brown sugar that almost reminds me of penuche, and some stewed sugary orchard fruits (peach, apple, and persimmon).

Finish: Contact with the smaller oak casks really affects this finish. Black pepper, baker’s chocolate, almond, Honduran cigar wrapper, clove, and a nice clean type of smoke come together almost too seamlessly to keep one guessing. In other words, the finish doesn’t tend to vary much depending upon time in the glass. I was surprised this finish wasn’t sweeter, given the nose and palate, but, hey, I’ll take it. Length is medium. I do taste some larger casks in this batch, if I’m not entirely mistaken, and they serve to add more distinctive character, especially in the finish.

Ironically, the use of wee casks make this bottle a big boy. No, the whisky inside is not terribly complex when compared with recent large batch Springers. I’m talking about the likes of Local Barley 16 Year Old, 17 Year Old Sherrywood, or even the fairly recent 12 Year Old Burgundy. Despite this fact, Springbank’s Rundlets & Kilderkins has a lot of chutzpah.

What a nice dark color the whisky displays in glass and bottle, alike. So pleasing to the eye. A shiny metallic-gold label on this one makes me feel as though I’ve won a Golden Ticket from Willa Wonka.

Concerning the nose, I really do appreciate this whisky’s interplay of brine, smoke, wood, and sherry. Yes, Springbank Rundlets & Kilderkins is something of an odd duck, but I like that. Better to take chances than to play it safe every single time. Laphroaig’s Quarter Cask is kind of a plain Jane when compared with this one. The Springer is cask strength, after all, and this helps to make it more memorable, as well as more unique, bringing out positive and negative idiosyncrasies more honestly.