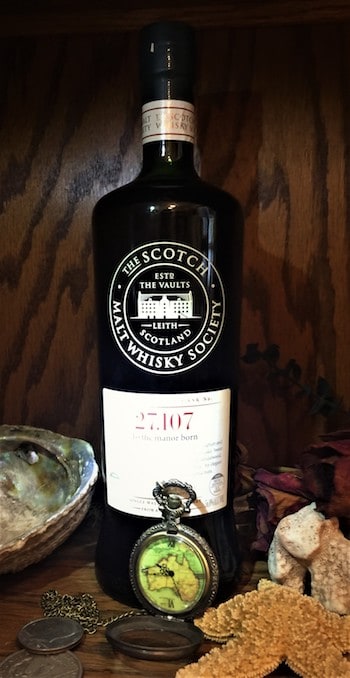 For those of you who scratched your heads about the title of this review, I might explain what the acronym “SMWS” means. The letters stand for Scotch Malt Whisky Society, a very special club for Scotch drinkers.

I like the fact that it is dedicated primarily to Scotch whisky. It’s nice to keep things simple. But wait: the society does release bottles from bourbon casks, world whisky casks, as well as rum casks. No matter. The namesake has stuck, and it is synonymous with some amazing single cask bottlings over the past thirty-plus years.

The mission statement for SMWS is straightforward: “To provide our members with an adventurous and fun journey of discovery of the world’s widest collection of single cask whiskies.”

A Drive Down Memory Lane

The Scotch Malt Whisky Society got its start in the late 1970s. Some members are fond of tracing the first inklings of its creation back to a journey taken by Pip Hills from Edinburgh, Scotland, out into the countryside. What was Pip up to? Well, he was driving to purchase a cask of single malt Scotch whisky directly from a distillery.

Which distillery is that, you ask? Truth be told, I have yet to track down that rather arcane detail, but SMWS does mention how Pip transported his beloved cask back to Edinburgh in a Lagonda, which is a British luxury car. This rather posh vehicle must have had a very large trunk, indeed, or a generous backseat, to hold such a big strapping cask of whisky. (I’m guessing it was a hogshead, rather than a tun.)

My, oh my, have they done just that. Over the past thirty-plus years, some AMAZING bottles have found their way around the globe. Thanks Pip! Today, I will be reviewing a single cask bottling from one of my very favorite distilleries: Springbank.

Nose: Toffee leaps out of the glass, along with a pleasant nuttiness (salted cashew). The ex-sherry Gorda cask seems to be working overtime. Definitely fresh wood here, as opposed to refill. Mmmm. Rather than “tinned peaches” mentioned in the SMWS description, I’m getting more tropical fruits, such as guava and papaya. Ah, but this nose also has an industrial side. Thank you, there is a God. Very nice, very nice. Quintessential Springbank paraffin is here, along with the type of oil on a stone used to sharpen knives.

Palate: Lovely hint of tropical fruits tug at one’s taste buds playfully, along with the promise of “old skool” Springbank treasures. But wait . . . what’s happening now? [Enter: The Devil.] I can’t even call his dastardly tasting note “gun powder.” No, it’s plain old sulfur, at a strength that I find problematic. Ugh. The eau de toilette of hell.

But this dram isn’t all bad. I’m also tasting hints of new horsehide, paraffin, creme fraiche, and a generous attenuation of sherry from the Gorda cask.  But, alas, sulfur hangs like a cloud of dread over the these other delightful notes.

Still, the whisky isn’t a total wash. Sometimes oxygenation can help to lessen, or even to alleviate, sulfur bombs. If six months in my liquor cabinet does not improve this bottle of expensive whisky, then I just might call a priest to perform an exorcism.

Finish: Balsa wood rises above the cloud of sulfur, along with notes of black chocolate and more leather, which seems to have aged to become reminiscent of a horse saddle I once owned. But what of sweet nothings?

Not to disappoint, there are hints of mint, turbinado sugar, and a lingering berry presence. Raspberry, to be precise. What happened to the more eccentrically pleasing tropical fruits, which were almost rum-like? Well, they’re still here . . . in the nose only. Such a beautiful nose, expressing both common and uncommon characteristics for a Springbank. Tasters at SMWS should have named this bottle “Beauty and the Beast.” Then again, if they had, it probably wouldn’t have sold out as quickly.

The addition of water provides welcome relief from “sulfuritus” described in my tasting notes. So what happened when a few magickal drops of agua became absorbed into the Fate’s broth? “Double, double toil and trouble . . . . ”

Now, I’m getting oak sawdust, a hint o’ mint, marzipan, under-ripe plum, and bitter berries. The poor, bedraggled sherry, very dry now, seems to have given up the ghost, dying unceremoniously in its Gorda cask(et). Usually water makes a sherry influence in whisky taste less dry, rather than more. In a way, I feel as though this dram is haunted. Everything seems backwards and upside down: r-e-d-r-u-m.

By now, you have probably guessed that I can’t recommend buying SMWS 27.107, which is only available at auction. I can say, with all manner of confidence, however, that I have tasted some AMAZINGLY GOOD bottlings from the Scotch Malt Whisky Society over the past decade.

Please do not let my critique of this one particular bottle of Springbank put you off. I wholeheartedly recommend joining SMWS. Likewise, if you have been following my reviews on The Whiskey Wash, then you know that I rarely ever meet a bottle of Springbank that I don’t thoroughly enjoy.

Society Single Cask No. 27.107 is pretty much an anomaly in an otherwise glowing track record. As Billy Bob Thornton says, “They can’t all be winners.”