Editor’s Note: These whiskies and chocolates were provided to us as samples by Bruichladdich. This in no way, per our editorial policies, influenced the final outcome of this pairing.

Bruichladdich recently curated for us a pairing of their Port Charlotte expressions with To’ak Chocolate. To’ak Chocolate, based in Ecuador, is co-founded by Jerry Toth and Carl Schweizer with other renowned Ecuadorian chocolatiers. To’ak works with a coalition of local cacao growers amongst conservationists to preserve Ecuador’s Ancient Naciaonal cacao from extinction.

To’ak makes small batch single-origin chocolate products. Each 50 gram bar is a luxurious expense. The bars used to pair with the Port Charlotte whiskies come from To’ak’s Signature Aged Series. The first bar uses Spanish Elm to age the cacao, and some cacao from previous batches goes into newer batches.  At 81% cacao, this bar costs $45. The second bar uses PX Sherry casks to age the cacao beans. While the cacao is lower at 76%, the price reigns in at $50.

Like Bruichladdich, To’ak also places an emphasis on terroir, heirloom genetics, and cask aging. Nacional is a coveted variety of cacao bean. In 2009, it was believed that Nacional was eradicated. However, in the secluded valley of Piedra de Plata, where To’ak harvests cacao beans, old growth trees proved to be Ancient Nacional. 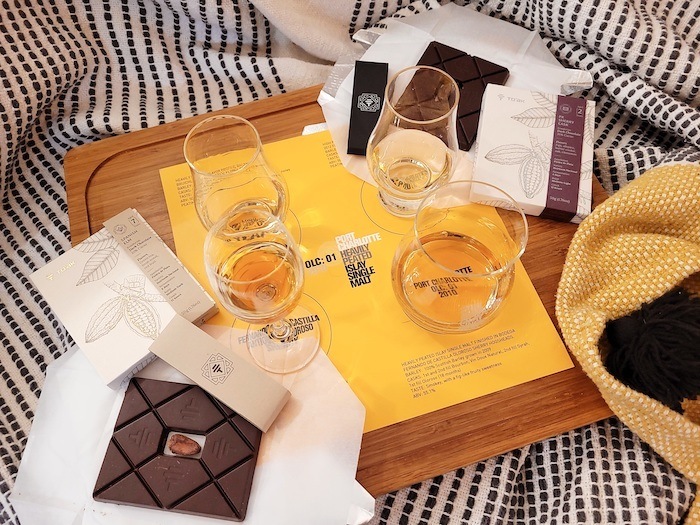 For the pairing, I started with the To’ak Spanish Elm bar. Opening this chocolate bar was an experience in itself due to the packaging. In the center of the bar is a precious cacao bean. I broke off a small corner of the bar and placed it on my tongue. It was dense and would barely melt, so I helped it along by making grooves with my teeth. I made sure not to chew through it.

With the chocolate still in my mouth, I started with a sip of the Port Charlotte 10 Year Old. The scotch brings the sweetness out of the dry cacao. Black pepper comes to mind after the whisky goes down and the chocolate piece still clings to the tongue. The PX Sherry cask aged bar paired with the Port Charlotte 10 Year Old emphasizes the smoke in the whisky. The chocolate also gives off cinnamon raisin. When finishing the PX Sherry chocolate, fig comes out on the breath.

Next up, I paired the Port Charlotte Islay Barley 2012 with the To’ak bars. The Spanish Elm brought out soot and ash in the scotch. However, the chocolate began to taste woody. The PX Sherry bar released smoked apples in the whisky. The peat also dances on the tongue with the chocolate after swallowing. Raisin and fig appear in the final melting moments of the chocolate.

Pairing the Port Charlotte OLC:01 2010 was quite the experience with the Spanish Elm chocolate from To’ak. This was my favourite pairing. The cacao brings out the Oloroso in the whisky. To my surprise, the whisky brought out the green tea notes from the cacao before pulling out red berry. With the PX Sherry bar from To’ak, spices up the OLC:01 2010. The palate hot with black pepper and cinnamon. The mouth is left full of soot.

The Port Charlotte OLC:01 2010 uses Bodega Fernando de Castilla Oloroso Sherry hogsheads to finish the whisky. Part of the pairing is tasting the chocolate with the Oloroso from Fernando de Castilla. The sherry is on the tart side rather than sweet syrup. However, both the Spanish Elm and PX Sherry bars subdue the tartness. The Oloroso brings out fig and cherry from the PX Sherry chocolate, yet with the Spanish Elm damp wood coats the tongue.

Compared to other whisky and chocolate pairings in the past, this was a unique experience. I recommend trying To’ak Chocolate’s signature series, especially the Spanish Elm bar. They even have an Islay Whisky casked aged chocolate bar. The luxurious cacao and delicious whisky is a great way to enjoy a special night in. I set the mood with Bossa Nova playing in the background.

To conduct a pairing, To’ak recommends the following steps: