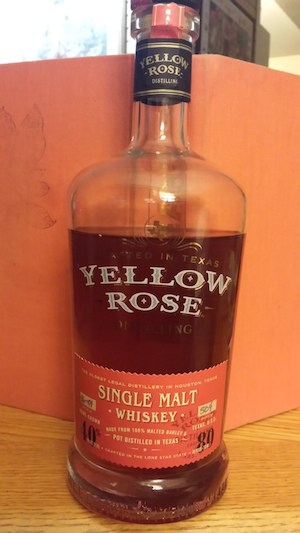 Kickstarter: the future of fundraising. Want to design a new type of smartwatch? Kickstarter. Have a great idea for a new video game? Kickstarter. Want to build a “bigger, better” distillery, barrel room, bottling room, and tasting room for your Texan whiskey distillery? Kickstarter. In 2014, enticed by rewards like custom shirts and shot glasses (and even used whiskey barrels), as well as plain old Texan pride, 143 backers raised over $25,000 to help Houston first whiskey distillery, Yellow Rose Distilling, continue its outward growth, and the company’s been producing at full steam ever since.

Started in 2010 by two neighbors, Ryan Baird and Troy Smith, the young distillery has been an example of small-distilling success. Starting with their Outlaw Bourbon, the company has grown to offer an impressive lineup of spirits, a number of which we’ve reviewed before. In addition to the bourbon, they make a rye, a blended whiskey, a maple-finished rye, an “American Whiskey“and, the focus of today’s review, a single malt.

One of the most important elements in developing the flavor of a whiskey are the barrels the spirit is aged and stored in. It’s that back and forth interaction interaction of the liquor with the wood of the barrels that gives each whiskey its unique taste. With its Single Malt, however, Yellow Rose takes this process a step further: Aged in bourbon barrels, the whiskey is then set to sit in port wine barrels to finish. The desired goal is a whiskey with layered flavors and subtle complexities – the best of both worlds… But, of course, there’s always a divide between intention and actuality. With that in mind, let’s take a taste and see how Yellow Rose’s Single Malt sizes up…

Vital Stats: Approximately $50, the Yellow Rose Single Malt Whiskey is double-pot distilled and comes in at 80 proof. Made from 100% barley (fun fact: unlike in Scotland, the U.S. has no rule saying a single malt MUST be made from barley), aged in bourbon barrels and finished in port wine barrels, the bottle has no specific age statement. For this review, we tasted from batch 16-01, bottle number 504

Appearance: In the glass the Yellow Rose Single Malt is a pale, yellow-amber, with medium-bodied, slow legs. The bottle itself is nice: golden logo with a textured label, batch and bottle numbers written on by hand.

Nose: The nose is nutty, with whiffs of over-ripe banana, wet earth, cocoa beans, and cardamon.

Palate: The Yellow Rose Single malt, upon first sip, is disappointingly thin bodied – almost oily – bringing on an alcoholic burn without any serious depth of flavor. There are subtle hints of dark chocolate, clover, and burdock, however the flavor profile is quickly replaced with a back-of-the-throat bitter rise which is unpleasantly reminiscent of acid reflex.

I don’t need my whiskeys to punch me in the face with flavor; in fact I’m partial to smoother drinks, more often than not. But even the smoothest whiskey needs a good flavor profile to balance things out, and Yellow Rose Distilling’s Single Malt just doesn’t bring much to the tasting table. Considering the fact that this whiskey is aged in bourbon barrels and finished in port wine barrels, I’ve got to say I’m pretty disappointed; I experienced almost none of the complexity and added sweetness that one would expect from such a pairing. I can see this whiskey doing a solid job as a background ingredient: mixed with some coke, or in a whiskeyrita, but on it’s own it’s pretty boring. Let me put it this way… it’s not awful, but for $50, you can do a lot better.

57
Shares
757
Views
Share on FacebookShare on TwitterGet Our Newsletter
Get Jefferson's Ocean at ReserveBar. Shop now!