Sponsored by Old Forester Bourbon, the slowest two minutes in sports is coming to media screens around the globe.

It’s the Kentucky Turtle Derby, and it returns this year on the first Saturday in May, and for the first time, turtle fans can win cash on the race by guessing the winners through a partnership with DraftKings. 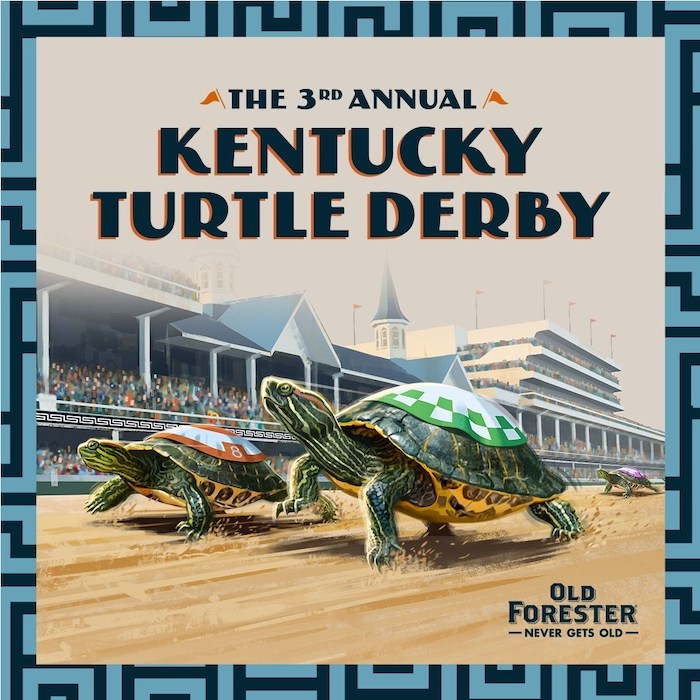 The 3rd Annual Old Forester Kentucky Turtle Derby will be broadcast on May 7th at 4 p.m. EST, on the Old Forester YouTube channel. (image via Old Forester)

The turtles will “race,” with the action shown in more than 10,000 bars and restaurants nationwide (via Atmosphere TV). In addition, the race will be streamed on YouTube and on the Big Board at Churchill Downs – a TV the size of three NBA basketball courts – for more than 150,000 people at the track.

The crowd will be there for the 148th running of The Kentucky Derby (the fastest two minutes in sports).

From now until the 4 p.m. race on May 7th, enthusiasts across the U.S. can answer various questions about the turtles in the race. Those with correct answers will split a $5,000 pot. Check out www.draftkings.com to sign up and to play.

The race itself will see eight turtles make their way to the starting gate, with “Hiding in Plain Sight” the morning line favorite at 5-1. Longshots include “Out of the Bog” (50-1) and “Snappy and You Know It” (35-1).

Turtles raced in Louisville in 1945 during World War II,  the only other time in history where the Derby ran on a date other than the first Saturday in May.

And for the celebrations, Old Forester offered their Mint Julep recipe: