The Shots Box Whiskey Club, a subscription service that allows customers to sample their whiskeys before committing to the full sized bottle, recently debuted. Every other month, members receive 10 minis of craft whiskeys from distilleries around the United States. The subscription gives customers a wide range of tools to work with – included in the box are an official Glencairn Shots Box whiskey tasting glass, whiskey tasting journal, as well as a Shots Box pencil for documenting each whiskey tasting experience.

Similarly to Eaves Blind, a membership-based subscription service founded by master distiller Marianne Eaves, Shots Box Whiskey Club aims to help customers discover what they truly favor by providing them with a variety of spirits. Both companies are dedicated to engaging customers in an educational experience and improving their whiskey tasting palate. While Eaves Blind is more focused on the connoisseur aspect of whiskey tasting, Shots Box Whiskey Club aims to expose its members to new craft whiskeys around the country. 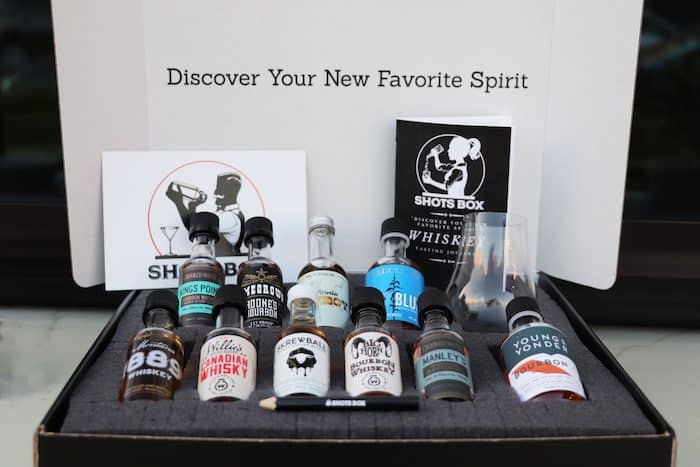 “It’s a fun hobby to become passionate about,” said J.C Stock, founder of Shots Box, in a prepared statement. “There’s so much more to whiskey beyond the usual suspects that customers are used to seeing at the average liquor store. There are hundreds-if not thousands- of small, mom-and-pop distilleries around the country making some of the best American whiskey you’ve never heard of, until now.”

Shots Box gives smaller, lesser-known craft distilleries an opportunity to become exposed and distribute beyond their typical geographical demographic. The niche whiskeys that Shots Box provides are rare spirits that many would be unable to experience elsewhere. Members also get access to perks and events such as invites to in-person and virtual tasting events, access to private Facebook groups, and newsletters with the latest information in whiskey news or discoveries.

Shots Box has a set of signature boxes to choose from, as well as full-bottled spirits. The company can ship to most states in the US.