Editor’s Note: Brett Ferencz, known to many as the Scotch Trooper, passed away peacefully on February 11th. We here at The Whiskey Wash offer our condolences to his family. A GoFundMe page has been set up to help them during this hard time.

Brett Ferencz landed in the world of whisk(e)y in the nick of time.  In the years prior to his arrival, it seemed the entire industry was falling so in love with itself that it was in the process of becoming an overstuffed child about to teeter off the sofa in pursuit of its own toes. Master distillers were now a dime-a-dozen as the internet granted everyone “expert” credentials to create the brown elixir.  So-called “influencers” overran social media, pursing their lips with their bottle of choice, less interested in what was in it than gaining the attention of the brands they exposed to their accounts in hopes of cashing in.

Then Ferencz’s @Scotch_Trooper showed up on Instagram and reminded us that whisk(e)y was fun.  And in doing so, he caused a mini-revolution by bringing us all back down to the ground to enjoy it and in the process, enjoy him as well.

Brett Ferencz, the @Scotch_Trooper, has been a dyed-in-the-wool honest-to-goodness Star Wars nerd since childhood.  If you peruse his Instagram account, you’ll find a picture of him as a beaming youngster surrounded by Star Wars toys and clothing.  When he got older he found, as many of us do, the joys of whisky, in his case Scotch single malts.  While its possible to have these two twin passions running in a parallel track in one’s life story, Brett’s brilliance was in the mashup and that is where @scotch_trooper was born. 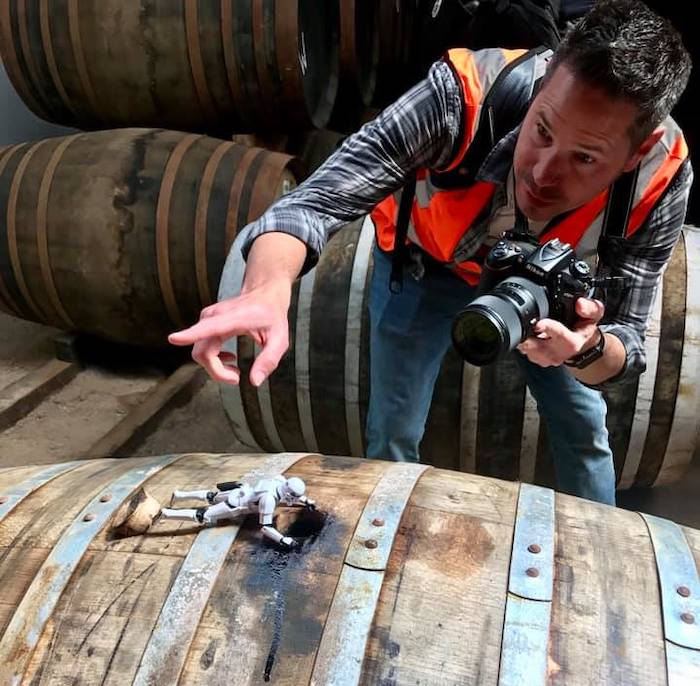 To say that he captured the imagination of whiskey drinkers around the world would be an understatement.  The current count on his Instagram account is 61.6K followers, which qualifies him for Yoda status.  Jas Sawhney, himself a well-known IG influencer in the world of spirits (@tonightspoison – 23.8K) admits the power of Brett’s influence: “He inspired me to start my own account.  People ask me, ‘who’s the first celebrity you followed? Kim Kardashian?’  No man, it was @scotch_trooper.”

Firing up the imaginations of strangers is a challenge which few people can successfully meet.  Walt Disney’s mouse on celluloid did it for a whole generation of kids.  George Lucas’ and Steven Spielberg’s aliens in space did it for another.  Each of them pursued a child-like joy of storytelling and in the process created an outer-world in which others could step into and instantly feel as they were part of something special and fun.  There were no prerequisites, just be there and let it take you away.

The @scotch_trooper followed in that same vein: simple setups of Star Wars action figures in a delicate pas-de-deux with seemingly outsized bottles of whiskey.  But this was no prop-up-and-shoot background.  Instead, Ferencz created wordless, colorful and imaginative tableaus, each one telling a simple story: a StormTrooper straddling the neck of a bottle of Laphroaig, two hands carefully peeling off the foil cover strip, one foot planted on the ground, the other pulled up revealing the effort and balance involved.

Another shows a jubilant Trooper, waving his helmet high above his head as he straddles a Speeder Bike, simulating the rollicking rodeo cowboy on the label of High West’s Yippee Ki-Yay whiskey in the background.  Two other Troopers stand by, one approvingly, the other skeptical.  A whole story in one shot.  As another of his friends and fellow Instagrammer Maggie Holguin-Banks (@whiskeyiseverything – 7.5K) said, “toys and whiskey, what’s better than that? ”

It’s revealing that Ferencz’s central figure in these visual fantasies was not the heroic Luke, not the wise Obi Wan or the enigmatic Yoda.  It was the anonymous, and somewhat mysterious Storm Trooper hidden behind a mask.  Talking with those who knew him, it was a fitting avatar.  Each one testified to his shyness, his quiet when among others. “Not a large group guy, he’d rather be in the basement crafting a lamp from a bottle,” said Jas.

“I followed him for a while on Instagram and then finally met him at the Water of Life dinner in New York in 2016”, said Kerrin Egalka, Regional Sales Director for Compass Box Whisky. “He was a pretty shy guy, but as you got to know him it was like you knew him forever.”

Added Holguin-Banks, “when the toys came out, he lit up the room, everyone posed the Troopers, getting ridiculous shots, he brought out everyone’s ‘space nerd’. Toys broke the anxiety barrier for Brett.”

And with this, Ferencz follows in another tradition, of the silent clowns Chaplin, Keaton and Lloyd: painfully shy underneath, a stone face exposed to the world, protecting the heart of pure joy and gentle childlike wonder that finds its voice in the art they produce.  Like them, Ferencz found a measure of fame, albeit in the smaller world of whiskey.  Brands sought him out as an influencer, inviting him to events and helping to monetize his activity; luminaries posed for photos with him, fans crowded around him at whiskey festivals, others were inspired to do the same with their cameras.

But shy artists can hide the vulnerability behind their art, as David Paradice, the Glenfiddich Brand Ambassador, related in a story.  “We were all in Chicago for a brand event, we invited a lot of social media influencers, and Brett was among them.  We kept the party going and we all ended up at the Office at Aviary (a well-known speakeasy beneath a renowned cocktail bar).  He went into the men’s room and came out pale.  Some guy was in there dressed like Pennywise, and we found out Brett was terrified of clowns.  He left but we coaxed him back in and we all ended up taking a picture with the clown, half terrified and half laughing, and it became the thing that unified the group to this day.”

Added Holguin-Banks, who was among the group, “it was the most endearing thing about him, playful but vulnerable.”

For the vast majority of people, it takes a fair amount of courage to allow someone access to your inner world.  Stoicness has become a virtue in the American character and breaking through that wall to open yourself to others is almost contrary to our natures, especially when life places hurdles in front of you.

The first hurdle for Brett was an anonymous 26-page letter to the Distilled Spirits Council, a trade association, in 2018, complaining that Ferencz and sponsoring brands were advertising liquor to children with the use of fictional action figures.  It resulted in a cease-and-desist action and most brands immediately pulled their support from @scotch_trooper.  A huge outpouring of support resulted and some brands, like the iconoclastic Compass Box Whisky and Virginia Distilling Company, continued to support him in spite of the ruling.

In May of 2020, with the Covid pandemic raging over our heads, Brett announced that he was diagnosed with Stage 4 pancreatic cancer.  The news spread throughout the whisk(e)y world’s social media networks like a bad hashtag as he headed into the journey of battling this dreaded disease.  It galvanized all those who admired and loved him to take action and in the resulting time, a GoFundMe page was set up to offset the expenses of treatment.

Soon, various other fundraising events followed, from whiskey auctions instigated by fellow ‘grammers to special releases of selected whiskies, most notably from the independent bottler Alexander Murray.  It was clear the impact Brett had on not just his followers but on the personal lives he touched.  Those of us who followed him were treated to glorious photos of his beloved wife and daughters as they gathered together to fight for his life, taking part in holiday celebrations in his home or a trip to the crest of the Grand Canyon.

For his part, Brett refused to allow this affliction to dull his own inner light.  The ineffable spirit that he portrayed with hundreds of magical photos of @scotch_trooper was still very much a part of his character.  His Facebook page identified him as CEO of Kicking Jar Jar Binks’ Butt.

Just recently, the whiskey world learned Brett had been placed into hospice care at home.  His wife has courageously communicated the difficulty he is facing and with the hope that his suffering may soon be relieved.  A link has been created for friends to express their support and love at: https://caringbridge.org/visit/brettferencz

The Scotch Trooper has left not an epitaph, but a legacy, for his family and for the tens of thousands he has touched.  It’s a legacy of hope, of love and laughter.  It’s a legacy of how one person can shine a brilliant light and the need of others to be bathed in it.  It’s that light that Brett Ferencz brought to the Force and it is with us all.