If you’re resolving to drink less this year, you won’t get any quibbles from us. No matter how much you love whiskey, it’s good to take a break every once in a while, and we’re firm believers in a periodic vacation from alcohol. But instead of gritting your teeth through Drynuary and then going right back to old habits on February 1, why not pair the stick with the carrot: Resolve to drink a little bit less all year long, and resolve to drink better while you’re at it.

Health advice seems to change completely every decade or so, but doctors seem to be more or less in agreement that light to moderate drinking is associated with good health outcomes, and heavy drinking is associated with bad ones. Fair enough. Anybody who’s woken up after a big night out with a cottony mouth and pounding head can agree with that, at least anecdotally. 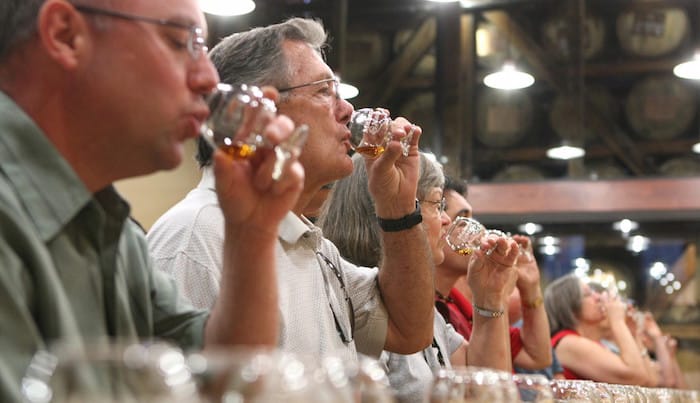 That’s a level of drinking anybody should be able to live with, although for many (especially during the holidays) it represents a bit cutting back. But rather than focusing on the limitation of seven or 14 drinks a week, think of each of those drinks as an opportunity to choose and experience something truly delicious. So sure, resolve to drink less—but also resolve to drink better.

What does that mean? It means quitting drinking things you don’t enjoy. No settling for ho-hum whiskeys or poorly made cocktails. No mindlessly guzzling mediocre drinks. No more glancing down, surprised, at an empty glass, having only the vaguest memory of having filled it in the first place.

Instead, choose your moments. Select something you like—or at least something you think you might like. Pour it into your best glass. Go ahead and buy yourself that fancy ice cube maker, or that expensive whiskey you’ve been eyeing. Make yourself a cocktail with the same care and attention as that mixologist at the fancy bar downtown. Then, pay attention to it. Smell it. Taste it. Drink it slowly. Get all the pleasure out of it that you possibly can—don’t shortchange yourself even a little bit.

And if you’re not enjoying it? Don’t finish it! Wine and beer drinkers have no compunctions about pouring out even delicious things after they’ve gotten a good sense of them, a habit the spirits world would do well to emulate. If it’s too painful to watch that delicious single malt trickle down the drain, well, pour it right back into the bottle instead; it’s probably high-proof enough to kill any germs you might have introduced.

It’s also worth noting that, while too much alcohol is bad for you, moderate drinking—especially in the company of people you care about—seems to make people healthier and help them live longer lives. If we’ve learned anything from those Blue Zone studies, it’s that having strong relationships with friends and family helps people live longer—and if we’ve learned anything from working in the drinks industry, it’s that alcohol brings people together. There’s a reason that human civilization and alcohol production arose at about the same time. Used judiciously, alcohol builds bridges, enhances community, and helps us feel connected to the people around us—a balm for the body and the mind.

So invite your friends over, crack open a bottle of something special, raise a glass, and toast to everybody’s health in the New Year. Then, enjoy the secondary benefit of drinking less and drinking better; a clear mind the morning after.