Locking Your Whiskey Up: The Rise Of Whiskey Lockers And Bottle Keeps

“They say drinking whiskey is an experience best shared, and we wholeheartedly agree.” This is a line from the wax-sealed bottle keep document provided by New York City’s Flatiron Room whiskey lounge and its recently opened sister spirits den, Fine and Rare.

Drinking whiskey is fun to do almost everywhere, but it is especially appealing if you have your very own bottle waiting for you at a cool bar. When Tommy Tardie first opened Flatiron Room a few years ago, it was one of the only establishments in the U.S. to set up a bottle keep program, in which a customer purchases an entire bottle of whiskey for their very own use that is kept in a special lockup on the premises, and served to them to drink from whenever the mood strikes. Now, dozens of bars around the country are offering bottle lockup and whiskey lockers as programs in addition to their regular selections. It seems patrons are, well, captivated, by the concept.

Tardie says he first learned about such a practice when traveling to the bustling Rippongi neighborhood of Tokyo, Japan, known for its nightclub scene. Bars would keep bottles for certain regulars as a token of hospitality. When opening Flatiron, he knew he was going to have a vast library of whiskey bottles, and a good way to build a return customer base would be to offer a full bottle lockup program. The problem was, of course, how to establish some rules. 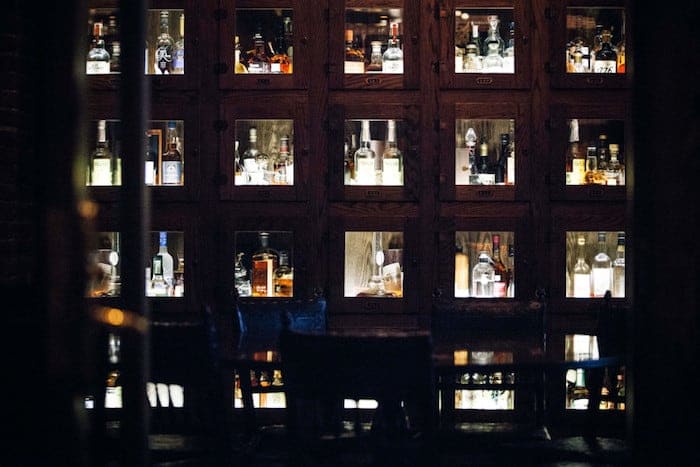 As long as the bottle remains on site, yes. Bars and restaurants are prohibited from selling liquor to consumers for their own consumption off premise. The bottle can be shared with anyone of legal drinking age with the discretion of the bottle owner.

Where things get tricky is that, in most instances, this is a whole bottle of alcohol that is poured by the guest at their own pace. The Dram Shop Act prohibits an establishment from allowing a guest to become so intoxicated that they cause harm to themselves or other people on the premises. However, the idea, after all, is to keep the bottle and not drink it all at once, and over-consumption is never encouraged.

Why buy an expensive bottle to drink in public when you can just drink from your own at home?

Besides the warm, fuzzy feeling of knowing one has their very own bottle to return to, and the fun and excitement of being presented with said bottle, it’s a great way to reserve something special and rare. The majority of these programs offer bottles that are in extremely limited quantities in the regular marketplace, or might be exclusives to the bar, and only guests who purchase a whole bottle of this rare spirit can drink it, and possibly share it.

Another reason to do it is perks. Bottle keep guests are usually provided with extra special attention, with gratis snacks, special glassware and more formal presentations of the bottles. At Fine and Rare, Tardie decided to create personalized metal bottle necklaces tableside – a stamp and dye kit comes out to engrave a name or message on the tag, and usually guests join in the fun.

Most of these bars are happy to provide services such as setting the bottle and tasting ware up ahead of time for a customer, with advanced notice. Some offer inside perks such as discount access to events and classes, and exclusive offers on new acquisitions of rare releases. Some bars allow the bottle owner to allow chosen guests to drink from their stash without them. However, as the Flatiron and Fine and Rare bottle keep agreement stipulates: “…we’ve provided you with entitlement cards so your friends can drink from your bottle. However, if your friends drink your bottle without you, you might consider getting new friends.”

How does it work?

Different venues offer different versions of the bottle keep. The majority, such as the above mentioned, Chicago’s Franklin Room, Portland’s Multnomah Whiskey Library, LA’s Walker Inn, San Francisco’s Nihon Whisky Lounge and even the casual, Connecticut Southern-inflected restaurant Mama’s Boy offer a one-time purchase of the bottle, which is held indefinitely until the liquid is gone. Tardie includes full gratuity and tax with the bottle purchase, but has noticed most customers continue to pay gratuity with subsequent visits out of courtesy.

Other venues will only keep the bottle for you as long as “rent” is paid on the locker. Now Boarding in Los Angeles offers the service with $600 a year membership. The first bottle is free, and subsequent purchases are half off list price. The majority of venues are considered high-end, but even dive bars like Ivy and Coney in Washington, D.C. (which is very strict about locker keepers maintaining a $100 and up stash of booze on a monthly basis) are getting in on the action.

Then there are places like Stitched, which is an upscale men’s clothing store the Cosmopolitan Hotel in Las Vegas. Within the shop is its own whiskey lounge, which provides regular guests and big spenders selections from a bottle lockup, though the service is entirely free. Well, except, for the really expensive clothing purchases. One has to earn their whisky somehow.

After all, drinking whisky is an engaging experience. As Tardie points out, sure, you can go out and have a steak dinner and a bottle of wine. But that is an entirely fleeting experience. A good bottle of whisky bears returning, and it’s even better when it’s your very own. To keep.

253
Shares
3.1k
Views
Share on FacebookShare on TwitterGet Our Newsletter
Get The Macallan® Rare Cask at ReserveBar. Shop now!