Ever hear of “Take Your Parents to Work” day?

Me neither. But it happened on a recent press trip.

The truly charming sight became an unwritten sub-plot of a story whose protagonist spent the better part of a day with mother and father in tow, watching him talk up his new mingled bourbon to a group of thirsty whiskey writers.

It was a hot and humid July day in the life of Fred Booker Noe, IV, a.k.a. Freddie Noe, and a.k.a. “Little Book,” the nickname given by his grandfather, distilling legend, Booker Noe, II.

“He’s more like his granddaddy than he is me, so the name fits,” said his father Fred Booker Noe, III. “He likes to explore, likes to tinker with things and solve problems like Dad did.”

For Jim Beam, the nickname Little Book is marketing gold. Coming from a grand sire as well-known as Booker, such a sobriquet is destined to become a brand. In this case, a brand of mingled whiskeys created by his grandson.

The first Little Book was released in 2017; this most recent extension, labeled, “Chapter 03: The Road Home,” is hitting shelves now. It is a muscular 122.6 proof whiskey made of undisclosed ratios of barrel strength Knob Creek (9 years, 117.4 proof), Basil Hayden’s (9 years, 123 proof), Booker’s (11 years, 129.2 proof) and Baker’s (12 years, 126.6). All four brands, were, of course, created by Freddie’s grandfather and released as Beam’s game-changing Small Batch collection in 1989. From labeling to liquid, this booze is a full-on family reunion in a bottle. 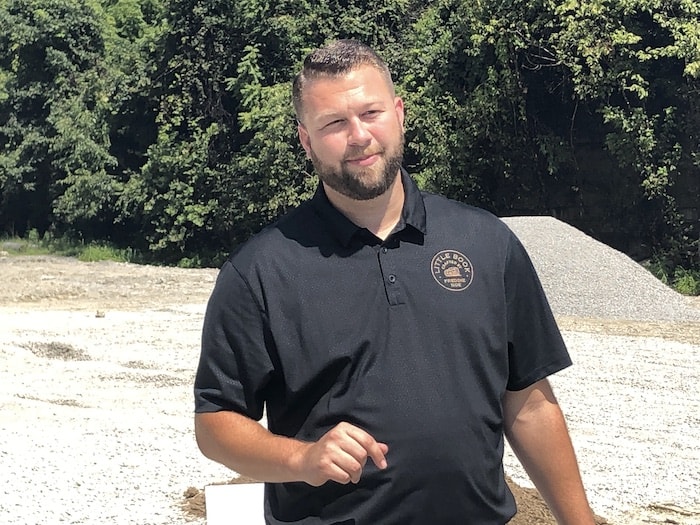 That day our group tasted all four bourbons from the barrel. Then we made a lame attempt at mingling our own Little Book Chapter 03. And then, we tasted each barrel-strength expression one final time alongside the finished product to understand Freddie Noe’s goal of creating a blend that drinkers could enjoy for its unity while leading them to seek out its four component bourbons.

Not surprisingly, that torrent of alcohol took a toll on my note taking, as pages of wobbly scrawling showed. But those scribbles were clear enough to reflect many positive observations from Ma and Pa Noe about their distilling scion.

I wasn’t surprised that Fred Noe was along for our Jim Beam visit. Just as Booker Noe groomed him to become master distiller, he’s actively and intimately involved in Freddie’s tutelage. But seeing Freddie’s mother, Sandy Noe, in the group, and Freddie’s wife, Kay Noe, along for the ride was unprecedented. If Jim Beam’s marketing team sought to place the family into the scene for some Rockwellian photo ops, the Noes didn’t get the memo or were ignoring the script. Freddie did his thing while they did theirs, which is to say they entertained each other, the writers and watched the upstart in action.

Fred Noe is known for being flat-out friendly, a trait that likely helped him court a wisecracking wife who’s commonly the butt of her own jokes. During the prior night’s team building exercise, where two-person teams cooked their own dinners, Sandy Noe doled out the laughs. I suppose that in a marriage in which your husband is known to legions of fans that you either become a wallflower or learn to flap your wings for attention. 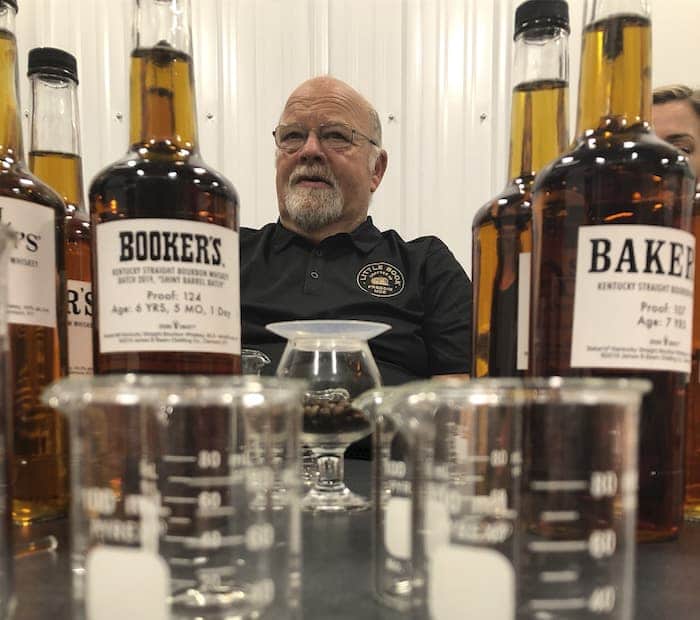 “I think he’s doing a great a job,” she said when asked about her son’s role as ringleader of our 15-person group. “He seems natural in it. He’s sure not afraid of talking to a group.”

He isn’t, he does it well, and differently from his father. Most outside of Jim Beam never hear Fred Noe slip easily into the technical argot of distilling. Most whiskey fans know him as a storyteller whose sometimes-ribald recollections of a life in the whiskey biz and time on the road with Hank Williams, Jr., get loads of laughs. But when needing to be technical, the big feller convinces quickly that he knows the niggling nuances of his craft.

Freddie pivots opposite of Fred, diving first into technicalities before festooning the heady information with his own funny stories. His sweeping hand gestures chase his words, while his father’s paws rest easily in his pockets. Freddie talks from the torso up; Fred gives little more than a twist of the head or a cock of the neck to make his point. 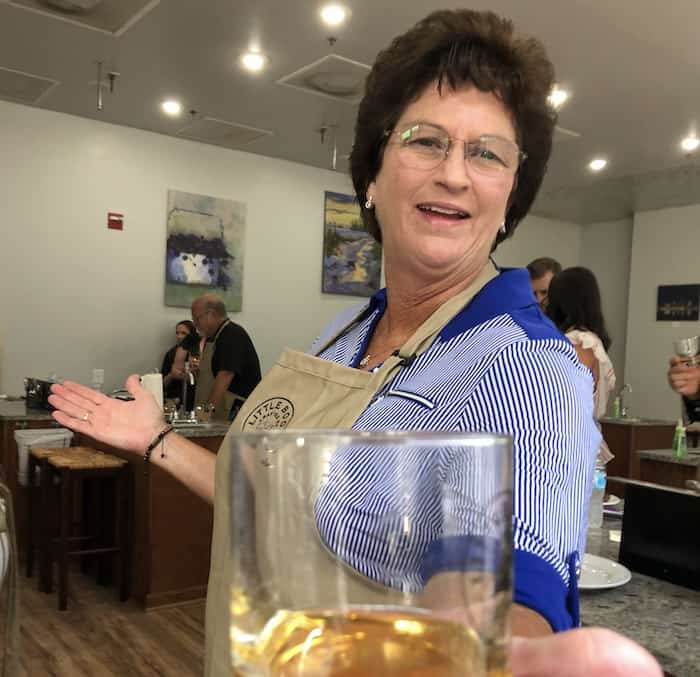 “I’m glad to let someone else do the talking for once; I’m happy to shut up for a change,” Fred Noe said when I asked if he enjoyed watching his son from the back of the room. “He’s doing really well, really well. I want him to be his own man in this role.”

Just as his father wasn’t certain he wanted a career in whiskey making, Freddie Noe took his time arriving at the same conclusion.

“Dad told me that if I wanted to be a distiller, I had to want it,” the younger Noe said.

That meant starting in the bottling plant, where Booker Noe made Fred begin. Humbling as it was to work late nights and do any job demanded of him, Freddie described those days as significantly formative.

“The people I worked with on night shift years ago—overtime shifts that often went into the next morning—they’re as responsible for who I am today as anyone,” he said. “Between them and Dad, they taught me so much, everything I know.”

What’s abundantly clear is the scion also has learned how to blend whiskey. Keep a lookout for Little Book Chapter 03. MSRP is $125.

**Side note: I’ve never been a big fan of Basil Hayden’s bourbon because of its low proof. But thieved from the barrel … that bourbon flat-out stole the show during that press visit. When asked if by several of us whether Basil Hayden’s barrel strength would someday grace retailers’ shelves, it was met with a firm, “No, we’re always going to bottle it at 80 proof.” Sadly, the audible groans and gripes commingled with muffled curses moved no one in charge toward reconsideration.