Heritage is important in the spirits industry, and few practices loom larger in the historic consciousness of the whiskey industry than floor malting. This hands-on process uses nothing but water, muscle, and a kiln to transform raw barley grain into the sweet, nutty malt that makes single malt whisky possible.

Here’s how floor malting works (for more, go here): After a thorough steep in water, grains are spread across a malting floor and raked or turned by hand until they reach just the right level of germination, which releases enzymes that begin to transform the starches in the barley endosperm into smaller soluble molecules. Then, they’re gathered up, transferred to a kiln, and heated to stop the germination and toast the grains.

While the vast majority of malted barley is now made in commercial plants, some distilleries are keeping the floor malting tradition alive. The romantic image of a worker hand-turning the malt on a drafty wooden floor is certainly a powerful marketing tool, but is that the only reason distilleries are sticking with floor malting? I talked with two different distilleries, Kilchoman Distillery in Scotland and Coppersea Distillery in New York, to find out why they continued to dedicate time, money, and energy to keeping the tradition of floor malting alive. 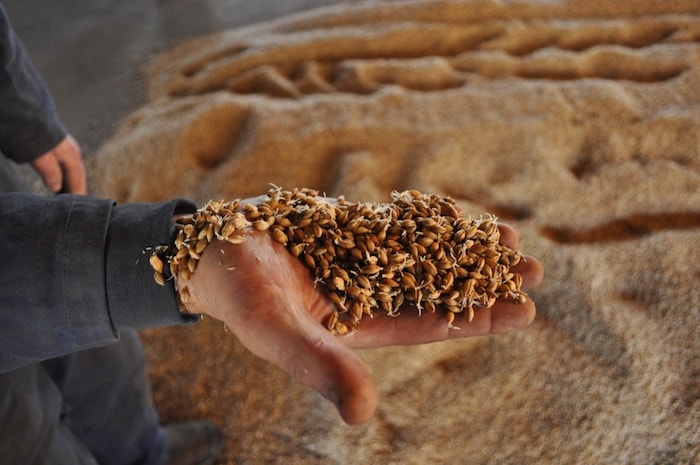 Germinating barley on the malting floor at BenRiach Distillery in Speyside.

Kilchoman Distillery is one of Scotland’s most active floor malters, producing several tons of malt each week from its own estate-grown barley. All of that malt goes into Kilchoman’s flagship 100% Islay malt, which is made entirely from the floor-malted, Islay-grown barley.

Kilchoman is the newest distillery on Islay, the first to be built in more than a century, yet its techniques are the island’s most old-fashioned. The scale is small, there’s little automation, and founder Anthony Wills says floor malting was always part of Kilchoman’s farm distillery plan. “We were looking for a unique selling point,” he says. “Growing the barley we use in production on the farm and doing the whole process is still pretty unique, especially in Scotland.”

Despite floor malting’s legendary status in the history of Scottish distilling, it’s not widely practiced anymore. Along with Kilchoman, fellow Islay distilleries Laphroaig and Bowmore both floor malt a small portion of their barley, as does BenRiach, Highland Park, Springbank, and Balvenie. Anthony says the staff at Kilchoman learned a lot from other distilleries. “It was a little bit of trial and error,” he laughs. “We were fortunate that Bowmore and Laphroaig had experience,” and that the distilleries on Islay tend to be collaborative rather than competitive.

Even still, Kilchoman ran into some obstacles. At first, they used anthracite (coal) to fuel the malt kiln, but after a fire in the malt house they switched to hot air. “We learned the hard way that drying things down with warm air is much more efficient,” says Anthony. It also took time for the workers to settle on the best schedule and method for handling the grain on the floor.

Today, however, the floor maltings is one of Kilchoman’s most unique attributes, and the distillery is in the midst of a major expansion that will double its floor malting capacity from two-ton batches to four-ton batches. Anthony says that expansion gives Kilchoman additional flexibility, as well as the potential to innovate like other single malt distilleries in the United States. “At Westland, they’re pushing the boundaries,” says Anthony. “Whether we do that or not, we now have the opportunity to do more experimenting than in the past. We’ll be looking at different peating and kilning levels so we can tinker with the different expressions we put out.”

While Anthony isn’t sure that floor malting produces one specific difference in flavor that’s easy to point to, he does think that the process impacts the flavor of Kilchoman’s whisky. “I think every part of the process has a bearing on character and style. All the way through, little things you do differently will have an influence…Although the style of spirit we produce from our own barley is different from a spirit we produce with commercial malt, there’s still a debate out there. And once you get it into cask and it’s in cask for a number of years, the cask will have the biggest influence.” 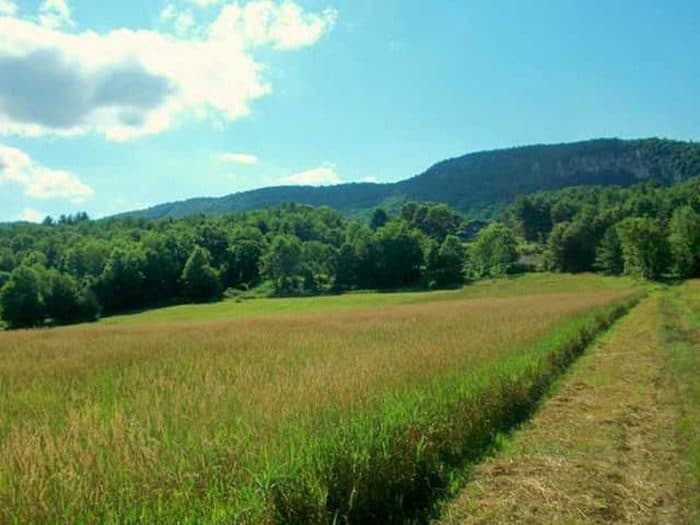 These waves of grain will someday be in your favorite Coppersea whiskey.

On the other side of the Atlantic, Coppersea Distillery in Ulster County, New York, is floor malting to meet 100% of its malt needs. “In the scope of craft distilleries, we’re the size of a postage stamp, and a one-cent stamp at that,” laughs Christopher Briar Williams, Coppersea’s chief distiller, farm manager, orchardist, and blender. Yet Coppersea punches way above its weight when it comes to reviving historic production methods and distilling traditions, a mission that has guided them from the very beginning.

“We wanted to make a distillery that a 19th century Hudson Valley distiller could walk into and understand exactly what was happening, with the exception of flush toilets and electric lights,” says Christopher. As part of that ethos, Coppersea grows a portion of its own grain, uses open fermenters and wild fermentations, and distills with a direct fire still. Their products, which include a range of whiskeys and brandies, all strive for what Christopher describes as “deep, idiosyncratic deliciousness.”

“We made a decision to use 100% New York grain back in 2012 when we started up. And if you want to make a true 100% Hudson Valley whiskey, some portion of the grain needs to be malted,” says Christopher. After discovering that the only local malthouse had a long waiting list due to high demand from brewers, and figuring that floor malting fit right into their traditional ethos, Christopher and his business partners decided to give it a try themselves.

“Our malting program is a pretty traditional floor malting program. We only malt to meet our own needs,” Christopher explains. “To me, to tell somebody I make 100% Hudson Valley New York Whiskey, I need to be able to make malt.” Christopher draws a distinction between whiskeys made using added enzymes, and those that rely entirely on the diastatic power of malted grain for conversion.

“There’s a huge skeleton in the closet of American distilling, which is exogenous enzymes,” Christopher says. “Most American distillers are using enzyme, and they’re not talking about it. If you’re really trying to make a traditional product, you can’t use amylase. In Scotland, if you use amylase, it’s not considered whiskey.”

Ultimately, malting their own grain affords Coppersea yet another way to revive traditional methods of production, and Christopher relishes the connection to history that malting provides.

“I’d love to reach back into the fog of time,” he says, “and see that first moment in Sumeria when somebody, probably a woman, was carrying her emmer wheat home in a basket, and a thunderstorm started and she dropped her basket and ran home. Two days later, she came back to recover her basket and found all that rain and time and oxygen had started to sprout the grains, and she said ‘Let’s see what happens, I’ll mix this with my other flour, maybe it will be good.’ And then this amazing thing happened: sprouted grain added to raw grain turned the whole thing to sugar. For me, that’s a very honorable tradition to be a part of. “