The movement of time in the craft whiskey world in this day and age is ever marching forward. New distilleries around the United States continue to establish themselves every week it seems like, but if you step back a number of years to say, 2011, you were definitely still a pioneer when it came to moving into a liquor category long dominated by the big guys out of Kentucky. That’s when Few Spirits, out of Illinois and founded by Paul Hletko, got their start, and now the distillery finds itself having firmly turned the corner into being a prominent player itself.

Before we get to the future though, let’s take a look at their past, more specifically how they came to be in the first place. It is an interesting tale of one man leading a challenge of sorts to change old Prohibition era laws and attitudes in Evanston, which is the city in Illinois where Few is headquartered and one which also plays an extremely prominent part in American history in regards to one time attitudes towards alcohol consumption, or in this case, the lack thereof.

Evanston was specifically founded as being dry, according to Hletko, which essentially means there was nary a drop of legal liquor to be found anywhere. The origins were religious mostly, with a group of well intended Methodists seeking to keep college students at nearby Northwestern University “protected from the evils of alcohol.” And thus Evanston came to be. 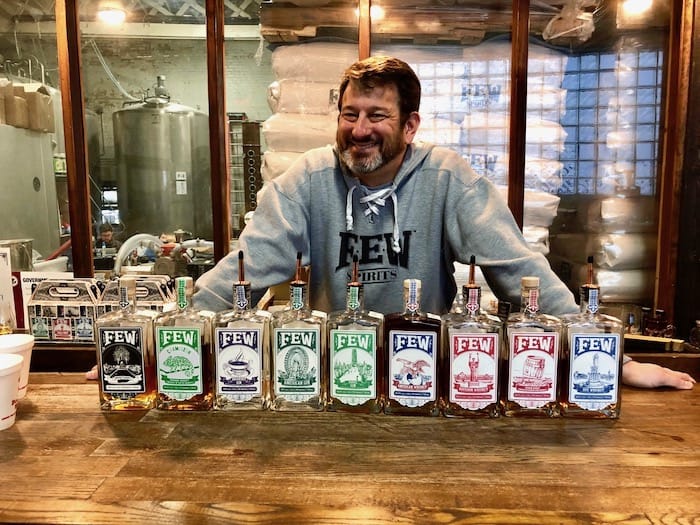 Because of this establishment the city became something of a natural home base for the Temperance Movement in general as it started to come together across the country. This was in a time that was some years before Prohibition began, in the late 1800s to be specific. As part of this era certain groups sprang up with values aligned to an alcohol free lifestyle, such as the Women’s Christian Temperance Union (WCTU). While it was initially formed in a different state, its second leader, Frances Elizabeth Willard, was from Evanston and became a strong voice for this cause.

In 1893 the World’s Fair came to neighboring Chicago, and at that event Willard became a major figure in speaking on Temperance. It is said she spoke to a crowd of over 300,000 people, likely influencing many of them to her side. She unfortunately did not live though to see the full realization of her life’s work, passing away in the late 1890s. 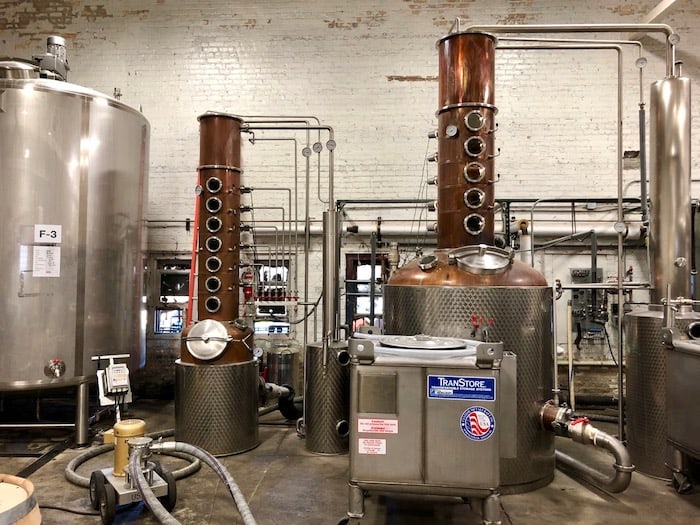 Evanston, in the ensuing years, remained a dry town leading up to, during and well after Prohibition. It wasn’t until 1972 that pressures from economic considerations led city leaders to begin rethinking the relationship with alcohol. Around a decade after that it is said the first liquor store opened up, and these factors laid the ground work for Hletko’s eventual engagement with local government to allow a distillery to open.

The establishment of Few Spirits

The man who would found and be the master distiller of Few Spirits had a significant challenge on his hands at first, having to navigate and reverse 160 years of Prohibition history, which included having to push for more changes to alcohol, zoning and fire laws. He made many trips to Evanston city hall, dealing not so much with resistance to his wants but more just the inertia it takes to get so many changes made in government. He eventually prevailed though, opening the doors to the distillery over eight years ago. 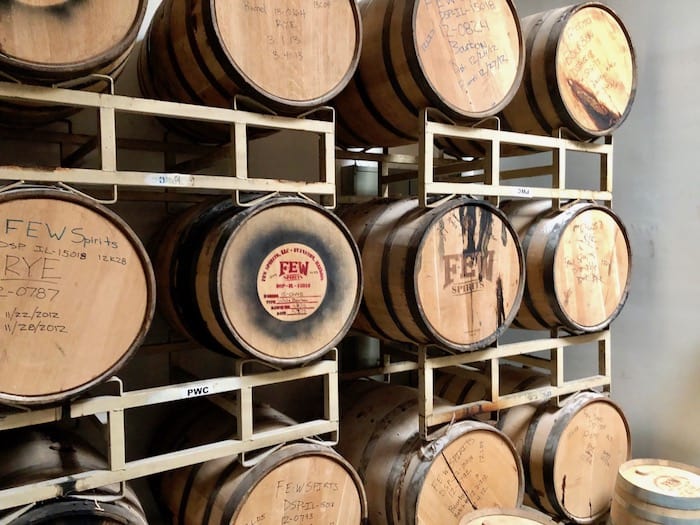 Now perhaps you’ve wondered about why the distillery is named Few (technically FEW) Spirits? Francis Elizabeth Willard. Yes, Hletko named his operation in part after a person tied to the anti-alcohol movement. How come? In his own words:

One, fascination with history. Two, trying to find the name that would imply a lot of things like “small, rare, exclusive, high-end.” You can’t actually say any of those words and pretend it’s gonna be any of those things, because if you say it, it’s not. Nothing luxury ever says it’s luxury. So, trying to find a word that would imply all those things without meaning it. I went through hundreds of names, most of which sucked. And then realized that “FEW” would imply all of that and also realized that by sheer and total coincidence [it was her initials].

You know FEW doesn’t mean any of those things but it implies many of them. And it opens up this massive avenue of true story that’s not made up. And it’s all based here in Evanston, and it ties all of this into the greater world as a whole in a way that goes beyond liquid.

You know liquid is super important. At the end of the day that’s what people are buying. But there’s a lot of liquids that have just as much ethanol in them as ours does. So why do people engage with certain things more than others? A lot of that is going to be the branding, the package, the promise, what the story behind the liquid is.

In particular for whiskey, what the story and history of the liquid is is as important if not more than the actual liquid. The word “few” and the name FEW gives us that truth.

In the time since Few Spirits opened its doors in a historic space down a tiny alley in downtown Evanston, the distillery has flourished as a pioneer in the craft whiskey space, producing some well regarded bourbon, rye and single malt expressions (more of which you can learn about in a 2017 interview with conducted with Hletko). The first two in particular have accounted for some 85% of total sales to date. Few also recently launched a blended American whiskey, bringing together the bourbon and rye whiskeys into a mix that also has an experimental cherrywood smoked malt whiskey added in. It is an interesting new direction for Few, and one which Hletko seemed particularly fascinated to be going towards. 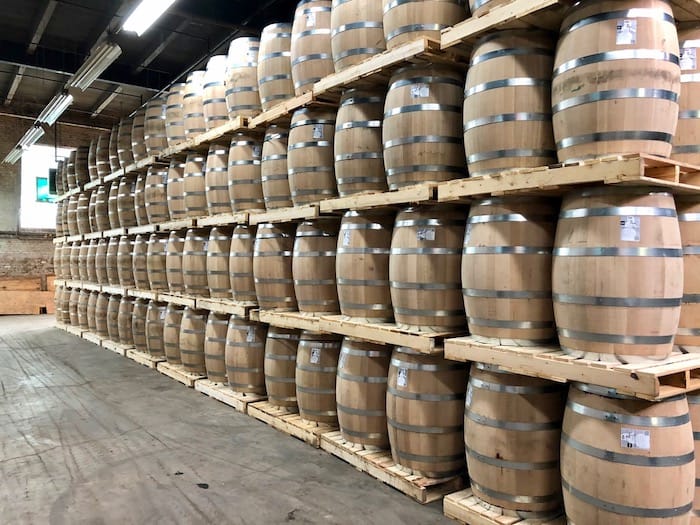 “So why release it? Because we like it,” said Hletko, “and we think it’s really good. Why call it American whiskey? Because there’s really nothing else to call it. It presents challenges, because the category “American whiskey” is not always perceived as being high-quality, so we have our share of challenges in bringing this product to market, but I’m not worried about challenges. We worry about the quality of the liquid and everything else. It will find people. The people that will want this product are going to find it because it’s delicious.”

It is in this forward thinking mentality that Few Spirits has cemented itself as a true craft whiskey player and no longer a tiny start up of a distillery. When in Evanston on a press trip to see the distillery’s operations, I and other writers were taken to see a large warehouse Few had taken over as they aggressively expand their operations. Inside this old facility many, many barrels of whiskey were seen patiently aging. The distillery team also has been growing to help keep up with demand for their spirits.

As to what this growth means to Hletko, and to how his distillery will continue to fare as the craft whiskey market continues to heat up, a quote from the 2017 interview stands out to speak to this. “I think the market is always changing,” noted Hletko at the time, “and we try to remain true to who and what we are. We try to make sure that we maintain our creativity, we maintain our passion, that we maintain our effort to focus on the art of distillation as well as the science and getting better everyday. What that means in the marketplace, we just make our products better and better everyday.”