Writer’s Note: I was a judge in the selection process for Eagle Rare’s 2019 Rare Life Award. I consider it an honor to share information on the winner here with you.

Earlier this month Buffalo Trace announced the winner of its annual Eagle Rare Rare Life Award. This award is given to someone who indeed leads a rare life, particularly fitting well into the criteria of being unique in courage, leadership, survival, devotion, character and heroism. Many amazing people are nominated for this award, and all are truly winners in their own ways. As for the one chosen by the judge’s panel to represent this amazing field, for 2019 it went to Army veteran Bryan Anderson.

Anderson has a truly awe inspiring story. He is a triple amputee, having lost both of his legs and his left hand from an Improvised Explosive Device (IED) attack during his second tour of duty in Iraq. The magnitude of his injuries seemed insurmountable to most, but he used his circumstance to start leading a truly rare life. Among many other things, Anderson is a spokesman for USA Cares, a national non-profit organization that is focused on assisting post 9/11 veterans in times of need. It is to this charity that his grand prize of $50,000 has been donated. 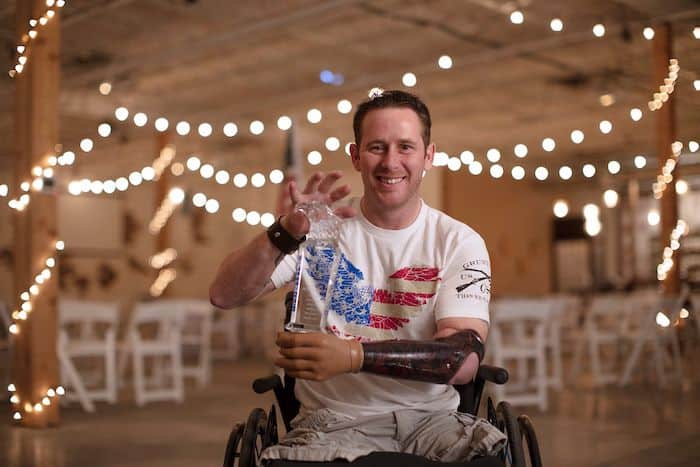 As well as USA Cares, Anderson is an ambassador for the Gary Sinise Foundation and a national spokesman for Quantum Rehab. He has appeared on the big and little screen in acting roles and stunt work in American Sniper, The Wrestler, CSI: NY, Hawaii 5-0 and All My Children. Anderson enjoys overcoming challenges which has led him to take up skateboarding, snowboarding and rock climbing in his spare time.

“It is our honor to announce Bryan Anderson as the ninth annual recipient of the Rare Life Award,” said Joshua Steely, Buffalo Trace bourbon brand manager, in a prepared statement. “His story of courage and survival is truly inspiring and exemplifies what it means to live a rare life. His commitment to helping others to never give up and make no excuses for their circumstances proves how much one person can make a difference, and we are so pleased to be a small part of his good work.”

As the grand prize winner, Anderson was honored at a ceremony in his home town of Chicago, Illinois on April 9. The ceremony included a short film on Anderson’s story that featured interviews with his family and USA Cares representatives. This film you can see below.

The 2019 winner was selected by open voting and also the previously mentioned panel of five judges, who reviewed nominations from across the country. This year’s judges included Jake Clark, 2018 Rare Life Award winner; Trish Clasen, Hearst Magazines; Harlen Wheatley, Buffalo Trace Distillery; Nate Woodruff, Whisky With a View; and myself. To date, Eagle Rare has donated more than $560,000 to 63 different charities through the Rare Life Award.