When people ask me for recommendations on Kentucky distilleries to visit, I ask them, “What would you like to see: One that’s pretty or gritty?”

Maker’s Mark, is pretty, every inch of it. Bardstown Bourbon Co. is not only pretty, but modern and chic.

Buffalo Trace Distillery is gritty, hard edged and industrial. Yet its leafy campus is spacious and park-like with rolling, verdant hills sloping toward the Kentucky River, a legendary whiskey shipping channel.

Barton 1792 Distillery is arguably double-gritty. Every structure at the Bardstown distillery is old, and most of its equipment is low-tech and timeworn. Its ancient coal-fired boiler—nicknamed “the dragon”—was only recently mothballed and replaced with a modern natural gas boiler. Until a new spent mash dryer was installed a few years back, the facility used World War II-era dryers. Unlike Buffalo Trace’s expansive grounds, Barton is wedged into a holler bordered on one side by Withrow Creek and Cathedral Manor on the other. Driving a car—much less an 18-wheeler stuffed with whiskey barrels—through its narrow inner roads demands patience and attention. 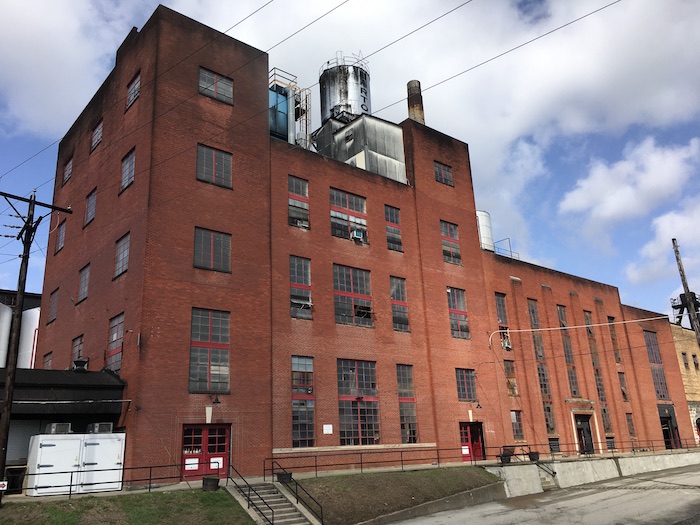 An exterior part of the Barton distillery (image via Steve Coomes)

Yet I love that distillery, every grain-dusted, spider-webbed, rust-edged, banana-bread-smelling inch of it. I love its whiskeys, too, especially its Full Proof Bourbon, which embodies the place’s unrefined nature: big, bold, powerfully flavorful and historic.

The Estate Tour is my favorite of all Kentucky distillery tours. Two hours long, tour leaders show guests parts of the campus that rarely see light, much less humans. Several years ago, then-homeplace manager, Josh Hollifield, let us squeeze my group of six into the tired SUV used for the tour and took us to places I’d not even seen on media tours. My friends, who’d never been to Barton, were struck by the history of the place and proud that such tradition was alive and thriving in Kentucky.

Sadly, come June 30, tours will end at Barton. Announced on Facebook in April, parent company Sazerac said ceasing tourism will let the historic distillery do what it does best: continue “producing the world’s best whiskey,” and by implication, more of it.

Sazerac’s decision makes sense. Barton 1792 Distillery is a brute of a factory built to churn out loads of distillate 24-7, not a place for interlopers with iPhones. Its builders surely never imagined tourists would queue up by the hundreds daily to see whiskey made. But that’s what happened.

Herding visitors safely through Barton’s narrow halls and stories of stairs was never easy, yet Sazerac did commit to building a new visitor experience there almost three years ago. When COVID hit, Sazerac shelved the project. When soaring prices for materials and labor doubled the cost, it killed it.

Here’s another good reason to let this workhorse do its thing without distraction: Since Danny Kahn became master distiller there in 2018, output has increased dramatically. So much so, in fact, that when Sazerac bought Early Times Bourbon from Brown-Forman in 2020, its production was destined for Barton, not Buffalo Trace, despite the installation of a second behemoth still there in Frankfort, Ky.

While I’m saddened personally that tourism will end there, I hate it most of all for visitors to Bardstown. Despite having lots of chances to visit newer bourbon tourism experiences in the area, Barton is an important part of Bardstown’s heritage and image. It’s a living, humming, steaming and clattering antique that looks at home down the street from the nearly 200-year-old St. Joseph’s Proto-Cathedral. It fits in visually with downtown Bardstown’s century-plus-old buildings. The town is old (founded in 1778), the distillery is old, and they complement each other.

Frankly, I’m disappointed for Barton itself—the operation and the people who operate it—because they worked hard to make a silk purse visitor experience out of a sow’s ear whiskey plant. By comparison, its equally historic and larger brother, Buffalo Trace Distillery, is Sazerac’s crown jewel, and of late, no expense is spared polishing it. Its visitor center underwent a massive expansion during the height of the pandemic, and much of the campus appears vacuumed and scrubbed to luxury hotel standards. Were it not for the wonderfully raw manufacturing operation, I’d relabel it “pretty.”

I guess I’ve always been a fan of underdogs, and even a tacit glance at Barton’s history reveals its perpetual underdog status—a rank magnified by its station in the shadow of Buffalo Trace. Considering that this incredible piece of history will soon be off limits to the public is a gloomy notion to ponder. If you’re coming to Kentucky soon, see it while you can.