I approach bourbon and cigar pairings a little differently than conventional wisdom dictates. For years whenever the subject would come up the refrain was always the same: pair a full bodied cigar with a full bodied bourbon, and pair a lighter bourbon with a lighter bodied cigar. This never made sense to me for a number of reasons. First, a full bodied cigar and a full bodied bourbon are going to be competing for your attention, while a light bodied bourbon and a light bodied cigar are likely going to lack in the complexity needed to make it an enjoyable experience. Second, this philosophy is too simplistic – it does not take into account the vast differences caused by blending, ring gauge, country of origin, et cetera for the cigar, nor does it account for the vast complexities in bourbon that come from proof, mash bill, barrel entry proof, and so on.

For these reasons it makes a lot more sense to pair a bourbon and a cigar based on some opposing factors and then experiment with a few different bourbons to determine which one actually compliments the cigar best. No matter what cigar you are going to start with I always recommend pairing it with a flight of bourbons with varying characteristics to determine which one will give you the most enjoyable experience. 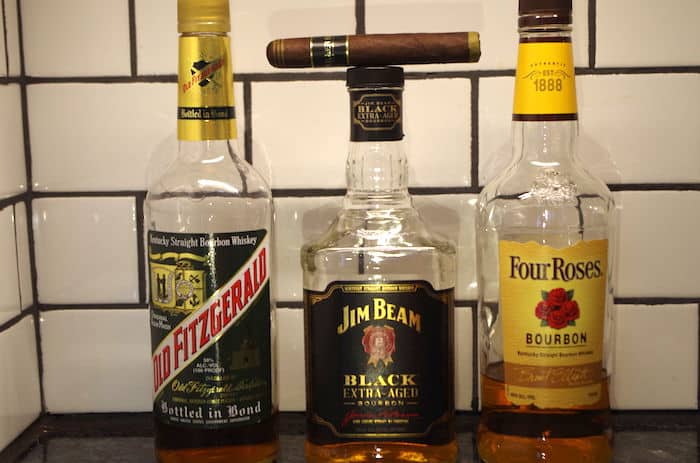 For this pairing I chose a Killer Bee Green Hornet from Black Label Trading Company. This cigar is made at the Fabrica Oveja Negra in Esteli, Nicaragua. It has an interesting wrapper in that it uses two different leaf wrappers to make a striped design, akin to a barber pole. The wrappers are Ecuadorian maduro and candela, though the candela only appears to be in the cap and foot. The binder and filler are Nicaraguan. It is a 5 x 48 and retails for $9.50.

“The Green Hornet started as an event only cigar, however after seeing the response from consumers and retailers we knew it had to become a regular release. The blend is a touch stronger than the Killer Bee to compliment the larger vitola and the closed Candela foot creates a very unique profile from the first puff. The Green Hornet is big, bold, rich and spicy. Everything you expect from a cigar in the Killer Bee lineup.”

This cigar burned beautifully. Predominant impressions were of faint cocoa and spice with a hint of toffee.

Together: The smoke turns the bourbon into a sweet apple spice bomb, while the bourbon doesn’t do much for the smoke.

Together: The smoke brings out sweet spicy honey notes with a hint of green apple in the bourbon, while the bourbon brings out faint cocoa and mellows the spice of the smoke.

I’m always surprised at the amount of spice a wheated bourbon can have, with or without the smoke. There’s definitely more to the spice notes than the flavoring grain. As such, the Old Fitzgerald did not fare well with this pairing. The Jim Beam Black was fine – it will certainly make for an enjoyable pairing if there’s nothing else available. But the Four Roses Yellow Label takes this one. There’s just so much complexity in that bottle thanks to the ten recipes inside that it’s typically quite hard to beat.