HR, the lone letters on this unembellished cigar band, are the initials of the blender and owner of this cigar line – Hirochi Robiana, grandson of famed Cuban tobacco farmer Alejandro Robiana. The Robiana family has been growing tobacco in Cuba since 1845. This cigar is currently produced at the La Corona Factory in Esteli, Nicaragua. Typically you will find the HR lines at cigar shops that carry boutique and specialty lines.

According to Cigar Aficionado, HR was first released in 2014. The wrapper is an Ecuadorian Havana tobacco and the binder and filler are Nicaraguan tobaccos. In spite of the fact the Robiana family has grown tobacco in Cuba for almost 175 years, there is no Cuban tobacco in this blend. The average price for this HR iteration ranges from $18 to $22.

This cigar had a closed foot, something I’ve been seeing more of lately. The flavor profile included notes of walnut tannin, dark chocolate, pepper, and a hint of campfire. There was a good draw and an even burn – what you would expect from an $18 cigar. The flavors are nothing too far out for the average cigar smoker. It is well balanced and easy to smoke. I suspect this cigar would pair well with a wide variety of spirits. 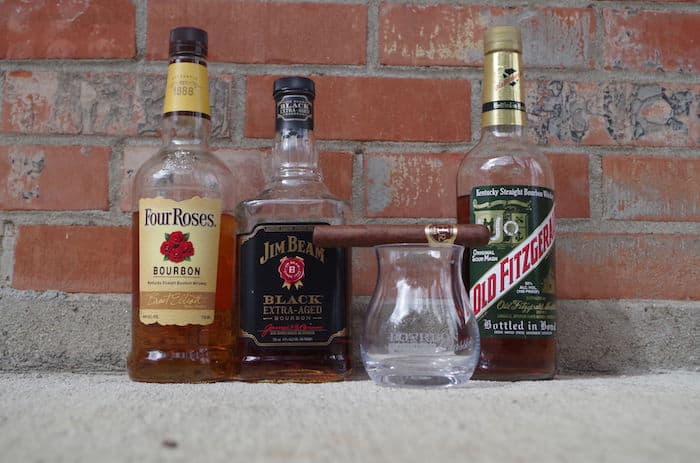 Together: The cigar brings out ripe apple notes and spice in the bourbon. The bourbon brings out milk chocolate in the smoke. This is the candy combination, though not overly sweet.

Together: The cigar brings out a flavor of sweet candied popcorn and green apple in the bourbon. The bourbon softens the smoke and highlights faint notes of cocoa. This is the sweet and savory combination, more savory than sweet.

Together: The cigar highlights the spice notes in the bourbon without making it overpowering, which is so easy with a high rye bourbon. The bourbon highlights the campfire notes and leaves a lingering dark chocolate taste on the finish. This is the sweet and spicy combination, though not too heavy on the spice.

Much like Four Roses Yellow Label has been a standout bourbon that pairs well with almost anything I throw at it, this cigar may just be its tobacco equivalent. Much like the balance in the Four Roses Yellow Label makes it very versatile with cigars, the balanced blend in this cigar could make it pair well with almost any spirit. Admittedly I only study bourbon, brandy, and rye with cigars at present, but I know plenty of people who prefer rum, tequila, or Scotch and I could see this standing up to any one of those.

Pairing bourbon and cigars, or cigars with any spirit, is about finding what you like. Balance is a key factor in my pairings, and this lineup had balance all around.