One of the wonderful things about whiskey (and other spirits) is that it’s sourced from the goodness of the earth. Sure, sure, there’s much mechanical wizardry between field and bottle, and all those business and commercial aspects too, but whiskey is elemental in the best of ways: grains and water, made magical.

Many of those Scotch-Irish migrating to the New World in the 18th and 19th centuries brought with them the knowledge of coaxing spirit from grain, but the ones who came to Kentucky faced a surplus of something other than their native barley: corn, and lots of it. Not to let a trifle like a grain variety get in their way, they finagled a new fermentation: corn liquor. Much goodness—and variety—has flowed from that time since.

For the giant commercial distilleries who want a consistency of product in the rivers of whiskey they produce, buying endless fields (or warehouses) of commercial corn makes sense. The most common corn for those producers is called yellow dent, often the type designated #2. Some big distillers also use a white or sweet corn, a type also grown in vast quantities. But for the craft distillers that are making whiskeys in smaller and often experimental batches, the big commercial corns don’t cut it. 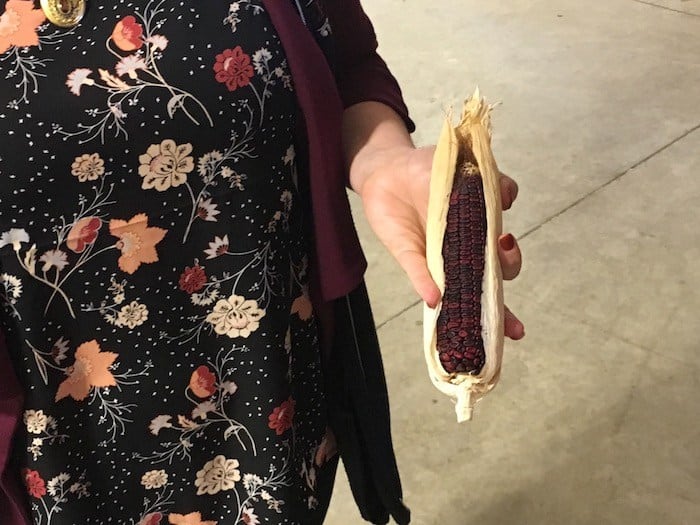 Heirloom corn is the thing. When you hear “heirloom corn,” you might think of corn with an old-fashioned bonnet on, but there are many old varieties that have preserved their unusual, distinct and often subtle flavors not found—or pursued—by larger companies. We not too long ago touched on blue corn bourbon, for example, as one of these. Another one of those heirlooms, with the evocative name of Bloody Butcher, is used by a number of small distillers for its piquant properties. We talked to Joyce Nethery, founder and master distiller at Jeptha Creed Distillery, Vince Oleson, head distiller at Widow Jane Distillery, and Robert Cassell, co-founder and master distiller at New Liberty Distillery about their use of Bloody Butcher.

Nethery has a deep—you could say genetic—relationship to Bloody Butcher, since the Nethery family has been farming Kentucky soil for over 300 years. They grow their own seed bank and replant from their own supply each year. “We are taking an honest-to-goodness old grain and bringing it into a new era,” she says. “Our family has a story to tell; this corn has a story to tell. Through our whiskeys we tell that story. We are making bourbon the way it used to be, growing the corn in the soil of our ancestors and pouring into the glasses of our customers.”

Though you might not associate Brooklyn with attentive farming, Vince Oleson, the head distiller at Brooklyn’s Widow Jane Distillery, also has some earthy tales of Bloody Butcher’s ascension. “We started propagating the seed in the Hudson Valley. A little town called Hurley to be exact, which is only about a 10-minute drive from The Widow Jane Mine, where we get our mineral water to bring our heirloom whiskies from still strength to barrel strength and barrel strength to bottle strength.”

And since history is part of what we’re discussing here, don’t forget that Pennsylvania was the site of the Whiskey Rebellion. It’s also the site of New Liberty Distilling, where Robert Cassell is the master distiller. They source their Bloody Butcher from the nearby Castle Valley Mill. “It was all about flavor. The fruity character we get from the Bloody Butcher corn we felt would be a really unique character to our whiskey, and having it locally grown was an added bonus that let us feature a true local terroir to our bourbon,” he says. “The fruitiness from the corn, as well as the sweet mouthfeel are great flavor complexes to pair with the spice from the rye in the mash bill.”

Nethery has some observations about the properties of the corn as well. “We’ve tested it and our distillate has an increased amount of Iso-Amyl Alcohol that we believe will yield fruit flavors such as banana and pear. Sometimes when we first come into the distillery in the morning, the fermenters make the distillery smell like banana bread. Straight off the still the taste is sweet and of shortbread cookie.”

Oleson’s flavor profile will make your mouth water too: “It has some really unique savory elements like earthy tobacco, and warm leather, which is balanced by graham cracker, allspice and molasses. It’s due to the fact that the corn has higher protein and lower starch than your typical yellow sweet corn,” he says. “Consequently, we also get much lower yields in both fermentation ABV and total amount of distilled spirit. It’s worth it for us though to highlight this heirloom varietal of corn and to showcase what these unique grains can do to make completely different flavors in bourbon.” 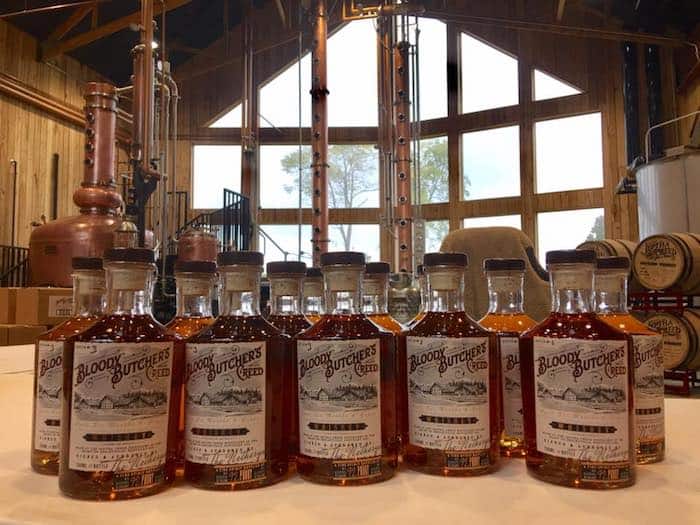 Oleson’s work with Bloody Butcher and other heirloom corns has birthed a new baby: “After we started working with the Bloody Butcher and the Wapsie Valley [another heirloom corn] we loved their profiles so much that we decided to see if we could create something truly unique to us. Because corn is open-air pollinated we had our farmer in the Hudson Valley grow the two varietals right next to each other. Over a four-year process of just growing grain, hand-shelling and replanting the true hybrids, we have our own corn now called Baby Jane. The bourbon is already out in a very limited initial batch but we are making more and more.”

The mash bills for the three distillers run from 68% corn to 80%, with varied percentages of malted rye and barley, and in the case of Jeptha, some malted wheat as well. Cassell says the heirloom corns require some special distillation attention. “We try to keep the still configuration in a low reflux setup to allow us to retain as much character as possible from the corn during our double-pot distillation. We do not use any plates, columns, dephlegmator, etc.”

You may not have heard of Bloody Butcher before, but you’ll probably find some in your glass if your whiskey tastes range. We counted about 15 distilleries using Bloody Butcher alone, from New York to Colorado, to Texas to North Carolina to Indiana.

Interest in heirloom corns is growing, along with the mushrooming of craft distillers. After all, “yellow dent” isn’t very poetic. Distilling with corns named Painted Mountain, Country Gentleman and yes, Bloody Butcher has a nicer ring. And makes for more poetry in the glass.

80
Shares
2.5k
Views
Share on FacebookShare on TwitterGet Our Newsletter
Read More Whiskey News
Laws Whiskey House Has A New Limited Edition Ruby Port Finished Bourbon
Cheers to the Dads! Personalize a bottle of his favorite whiskey to create a modern gift for the modern man. Use code: FATHERSDAY20 for $20 off your next order of $100 or more at ReserveBar