Editor’s Note: For the record, distilling at home is not currently legal in the United States.

Bourbon love is soaring these days, with the resurgence of classic cocktails that cry for its blessed bite, industry heavyweights unearthing and releasing old stock, and craft distillers producing unusual grain and distilling combinations. Inspired by the work of distillers big and small, my girlfriend and I thought we’d take a shot at making our own bourbon. What could possibly go wrong?

After all, we’d made “sugar shine” several times with a table-top distiller our neighbor loaned us, so we weren’t going totally naked in spirit-making knowledge. The distiller is the size and shape of a Mr. Coffee machine, but for us was a “Mr. Moonshine.” Pretty simple stuff: Put some sugared water and some yeast in a gallon jug that has a “bubbler” top for fermentation release, wait a few days, and then run it through the distiller.

The stuff came out 110–120 proof or so, and we trashed the heads and tails so we wouldn’t go blind, maybe just have to wear glasses. The taste? Well, some sour tang, no appreciable finish—just your fundamentally drinkable solvent. It mellowed a hair when we left some with vanilla beans and coffee beans in bottles for a month, and was better yet when we aged it in a 3-liter barrel I use for barrelled cocktails.

But good? No. Anything like bourbon? Not on the same planet.

Graduating to the Big (?) Leagues

We gave some small bottles to our friends, but noticed at later visits that no one had drunk any. Probably they remembered the Christmas we gave away bottled olive oils using a bunch of herbs from our own garden. Later, we read online that the process could be a source of botulism poisoning. We had to alert all of our friends that our gifts were better left in their pretty bottles. But what botulism could stand up to moonshine anyway?

Emboldened by our success (?) with the shine, we decided that we’d use our neighbor’s “real” still and try to make some bourbon. He’d bought a kit on the Internet (yes, this is playing with matches), and though junior-league compared to a true production still, it is a six-foot steel and aluminium (temperature controls, release valve, raschig rings and copper mesh in the condenser) device that can output by the gallons. He’d been producing home-grown tequila and barrelling it in 1–3 gallon barrels for a while, and his handiwork was top-shelf. Well, it was leagues better than our moonshine.

Surely we could produce a home mash that would at least distill out into something a little more refined than our sugar shine, right? So, we bought a how-to-make-whiskey book written by a local distiller who has since gone on to fame as a developer of systems to artificially accelerate the aging of spirits. However, this book didn’t explore any molecular-reaction physics, it just laid out a seemingly straightforward method to bring some fresh whiskey into the world, using DIY methods. 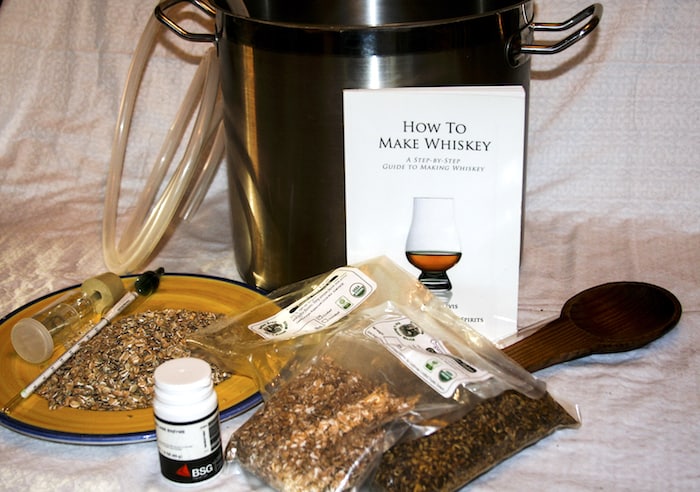 Do This, Get That

I was thirsty, and didn’t think the distilled output from a gallon of liquid would do, so we tripled the recipe. We brought a 5-gallon pot up to 160 degrees (according to our pro candy thermometer) on the stovetop, and though I’m not the cook in the family, I put the corn, rye, wheat and barley in, in the recommended order. Here’s where things might have gone a bit awry: the recipe calls for holding at 152–155 degrees for 1-2 hours. There was fair fluctuation in temperature—I guess those sugars were busting out of those grains in some kind of stampede—so I had to adjust the flame much more often than I presumed, but I kept it in the ballpark.

But much more alarming was that the mix became thicker and thicker, approaching the consistency of a steel-grain oatmeal. That didn’t seem right to me. I did stir it a fair amount to make sure there was even distribution of grain and water, but that seemed to rile it up toward becoming wheel-bearing packing all the more. Stirring became an aerobic exercise.

After a good hour on the stove, I took it off, worried that I might be making a tractor tire in that pot. But never having made bourbon before, I wasn’t sure we had a real problem going. After all, we had our powerful yeast, plus we’d added an amylase enzyme to bust those starches into more willing sugars.

When the glop from the pot reached the recommended 90 degrees or so, we put it into a clean, 5-gallon plastic bucket, added in our magic yeast, covered it with a cheesecloth, and let it ferment hot, as suggested. The fermentation time is stated to be 2–4 days, and I never lifted that cloth, but I did feel the sides of the bucket all the time. They were warm—we were on our way to bourbon!

We had our hydrometer at the ready to see what alcohol level our initial fermentation had produced. Finally, after 3 days, I couldn’t stand it: the reveal!

You know how a good bread dough will rise majestically out of the bowl, broad-shouldered and strong? We had what looked to be a good sourdough rising up, but perhaps more solid than you might get in your normal bread dough. And perhaps much more solid than you’d ever get in a bourbon mash. I’ll be more direct: this appeared to already be bread, hearty and thick, without virtue of being cooked. Even Harry Potter couldn’t make bourbon out of this.

I said before that our sugar shine had kind of a sour tang? Well, this did too, but I wasn’t about to taste it. The jiggling contents went into the compost heap, and its foul anaerobic odor with it. No doubt there was some percentage of alcohol in there—I’m sure the worms had the party of their lives.

That was an unexpected result, but hey, maybe I might discover a new penicillin if we try again. In the meantime, all my bourbon will come from a shelf at the store.

56
Shares
6k
Views
Share on FacebookShare on TwitterGet Our Newsletter
Get The Glenlivet 18 Year Old at ReserveBar. Shop now!