Hosting a nosing and tasting on an open barge didn’t seem like good idea after all. It was not the rain that bothered us, but the gushing winds that would certainly get hold of our glasses. So, seven American whiskey bottles are on their way back up the long staircase leading up to the Whisky Room.

Imagine being at your high school reunion which is organized every five years. “Hi Brian, haven’t seen you for quite some time. Sorry, Fred, I am Steven now and Harry in four years from now.” It’s this phenomenon of name changing that makes it so very confusing to get a good grip on the American whiskey landscape. It had never occurred to me that some whiskeys change names just by aging longer. After I had seen the Spoelman-Haskell chart a lot was clarified. Basil Hayden’s, for example, is  a longer-aged version of Old Grand-Dad, and both are made at the Jim Beam distillery.

I have always wondered who Sazerac’s 18 younger brother was. But now I know: Van Winkle Reserve 13. Well, now that I have taken my first steps in the American whiskey maze we can have a go by tasting the various beauties I purchased from my whisky retailer. 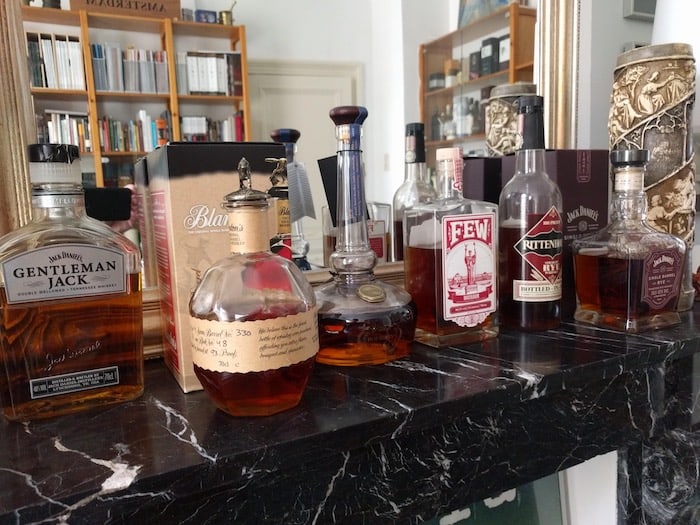 A range of American whiskeys (image via Fred Blans)

We settle ourselves in the Whisky Room and kick off with a double filtered Tennessee whiskey: a Jack Daniel’s Gentleman Jack. I had never been one of those Jack geeks, because I’d never thought much of it. Moreover, it took me years to buy the first bottle of this Tennessee heavy weight and world icon. Why this U-turn? The reason is to be found in my visit last summer to the Jack Daniel’s distillery in Lynchburg, Tennessee, with the highlight of this two day stay being most definitely the way our guide Dusty hosted our VIP tour.

Mellow is the magic word that vibrates throughout the entire Jack Daniel’s distillery. Percolating through a ten foot layer of charcoal is the average treatment for every bottle of Jack Daniels. Being a bit of a special dude, our Gentleman Jack was filtered twice. ‘Double mellowed’ is written on the bottle several times. It is part of the Lincoln County Process that all whiskeys that are eager to be labeled ‘Tennessee whiskey’ go through this sugar maple filtering process one way or the other. So does George Dickel Whisky (no ‘e’ here) from Cascade Hollow in neighboring Tullahoma. Strangely enough only 15 miles south west of Lynchburg distiller Benjamin Pritchard from Kelso was exempted from this Lincoln County Process agreement. But, who cares? We enjoy the fixed JD mash bill of 80% corn, 12% rye and 8% malted barley.

It was in 2013 that Colin Spoelman and David Haskell came up with The Bourbon Family Tree chart. Imagine the fact that our second dram is a bourbon from Buffalo Trace. Distillery owner Sazerac reportedly manages to divide its beauties into a range of categories that include rye mash, wheated mash (Pappy van Winkle), mash bill #1: 10% lower rye (Stagg, Buffalo Trace, White Dog, Old Charter, etc) and mash bill #2: 10 to 15% higher rye (Blanton). Twelve of their most prominent whiskeys make up Buffalo’s whiskey tree according to the chart. Man, was I glad they unraveled this alcoholic labyrinth for me.

The ‘Blanton horse and jockey,’ as I learn, is world famous. Being a state of horse breeders and horse pursuits the Kentuckians at Blanton‘s designed eight fitting stoppers, each for one specific moment in a horse race. Underneath the ‘S’ stopper I find a whiskey that really surprised me. The word ‘victory’ is linked to Blanton’s last letter: the winning of the race. This 93 proof (46.5 % ABV) is smooth, layered and gives me some spicy hints – a real winner.

The sound of whiskey

I pour our next dram, the Willett Pot Still. The sound of this pot still shaped bottle is amazing. Apart from the color, the taste and the finish, this is the extra dimension that makes this American whiskey a rare beauty. Never before, neither from Scotland, nor from any other part of the whisky world, had I heard this almost seductive soothing sound. This Willet bottle is like an instrument. Irish author James Joyce must have known this when he wrote ‘the light music of whisky falling into glasses made an agreeable interlude.’

All whiskey tastings are about telling stories and not merely about drinking. At that very moment the whiskeys themselves are not the focus of our attention, but merely stepping stones for the bigger picture that is being told. This is exactly what happened when I was introduced to FEW for the very first time, an artisan whiskey with a story. FEW Spirits is a craft distillery at the north side of Chicago in Evanston, Illinois. The suburb is famous for its Northwestern University. The Methodist founders of this university supported the ideas of the Temperance Movement. This Women’s Christian Temperance Union was a movement that was mainly focused on the abstinence of alcohol. Now here it is. Evanston had been familiar with prohibition even before January 1920 for about 60 years.

My tasting group tastes 20% Northwestern rye, 70% corn and 10% 2-row malt. And if you want to do this at home, make sure you pour this whiskey at least an hour before you pick up the glass, because it really needs some air and some landing-time.

Never before have I poured a bottled-in-bond whiskey. Why is that? To me they sounded like relics from the past, leftovers from old wooden rickhouses. Skimming the whiskey blogs I can see that it is far from this. BiB whiskey is on the way up, it’s hot and it has been very 2017, very 2018 and it’s certainly very 2019 to have this whiskey on your top shelf.

It’s not a hype from the late 1800s when the Bottled-in-Bond Act was passed. In those days it was to protect the consumers from fake whiskeys and other faux booze. Four conditions were laid down by law – the alcohol/whiskey should be made at a single distillery, produced within a single distilling season, aged for a minimum of four years and bottled at 100 proof (50% ABV).

It’s closing time and the last dram is poured: a JD Single Barrel Rye, the only JD expression with a different mash bill from the ordinary of 70% rye, 18% corn and 12% malted barley. A true finger-licking glass of rye whiskey. And all this with a bite but still very mellow. After six drams we talk some necessary politics: it’s time to get rid of these absurd EU tariffs. Some suggest talks on the highest level. Another suggestion: why not pair these talks with this great JD Rye? It would certainly mellow both sides.