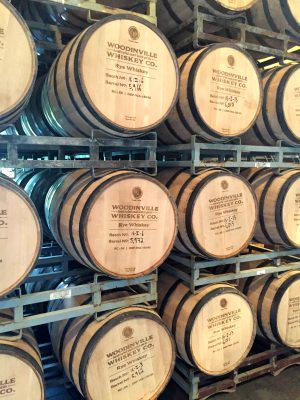 Barrels wait to be trucked over the Cascade mountains at Woodinville Whiskey. Photo by Margarett Waterbury, image copyright The Whiskey Wash.

Woodinville has got to be Washington’s booziest town. Just a few miles north of Seattle, this small suburb is home to the Washington State’s largest winery (Chateau St. Michelle), one of its oldest and largest breweries (Red Hook), and its largest craft distillery, Woodinville Whiskey. It’s also home to more than 100 winery tasting rooms, six breweries, and five other distilleries. Not bad for a town of 11,000.

On a recent trip to Seattle, I dropped in on Woodinville Whiskey for a visit with distiller Mike Steine. Mike’s been a distiller at Woodinville since they opened in 2010, but it’s not his first time working in a distilling environment. His previous career in biotechnology put him behind the controls of other kinds of fractionating columns – “but whiskey is a lot more fun,” he laughs.

To qualify for a craft distillery license, Washington distillers need to source at least 50% of their inputs from in-state growers. For Woodinville, that means they needed to find a good source of local grain. Originally, they’d hoped to be an all-organic distillery, but it turned out sourcing organic corn from Washington growers was harder than they’d thought. “We just couldn’t get the quality,” explains Mike, and they weren’t ready to abandon their bourbon dreams.

But then they found Omlin Family Farm, a grain grower in Quincy, Washington, on the eastern side of the Cascades. While they aren’t certified organic, Omlin Family Farm was able to grow great-quality, non-GMO grain, and they were excited to partner with Woodinville Whiskey. Woodinville contracts them to grow corn and rye, says Mike, and they pay a much better price than the Omlins could get on the commodity market.

That partnership presented another opportunity: aging. Woodinville Whiskey trucks all of their barrels over the mountains to Quincy to age. “The temperature swings over there can be 100 degrees in a single day,” explains Mike, which means the whiskey ages faster than it would in temperate western Washington.

At one time, Woodinville was known for its small barrel aging, a strategy that creates a flavor profile that doesn’t appeal to everybody. But over the years, they’ve shifted much of their production to full-sized casks. In the tasting room, I sampled two whiskeys aged in 53-gallon barrels: an American whiskey aged two years in lightly charred barrels, and a five-year-old bourbon that was a real show-stopper. Sweet, spicy, and full of robust, mature wood character, this will change the mind of anybody who says craft distillers can’t make a product that competes with the big guys.

In 2012, Woodinville Whiskey outgrew their previous facility, so they moved into a purpose-built plant just down the road. In addition to a spacious manufacturing floor, they’ve got a beautiful tasting room and a second-story event space overlooking the stills, both filled with reclaimed wood and illuminated by huge windows.

Woodinville is now the largest distillery in Washington State by a huge margin. In 2015, it produced 140,000 proof gallons, almost half of the total output of craft distilleries in the entire state. Its closest competitor, Westland, produced just 63,500 proof gallons during the same year, less than half of Woodinville’s output.

What does the future hold for Woodinville? When I asked them if they were working on any special releases, Mike smiled. “We’ve experimented,” he says, “we’ve got some other bourbon mash bills aging now, which we might release down the road – maybe eight years, 10 years. We’ll see. We’re always experimenting.”

20
Shares
506
Views
Share on FacebookShare on TwitterGet Our Newsletter
Cheers to the Dads! Personalize a bottle of his favorite whiskey to create a modern gift for the modern man. Use code: FATHERSDAY20 for $20 off your next order of $100 or more at ReserveBar