The year 2019 seems a torturously long way from today if you’re eager for a taste of Wilderness Trail Distillery’s first bourbon. But to cofounder Shane Baker, the long pause between distillation and bottling isn’t at all painful, it’s purposeful. If you want to make really good brown liquor, he said, you have to let the process happen at its own pace.

“You can’t have good whiskey without the wait; you just can’t have it,” Baker said.

You also can’t expect a young distillery, founded in 2013, to last long by making a bad first impression in Danville, Kentucky, a town of 16,400 near the heart of bourbon country. Baker and Pat Heist, his business partner in the distillery, are convinced that a rest of at least four years, and maybe five, is necessary to get their bourbon right the first time. 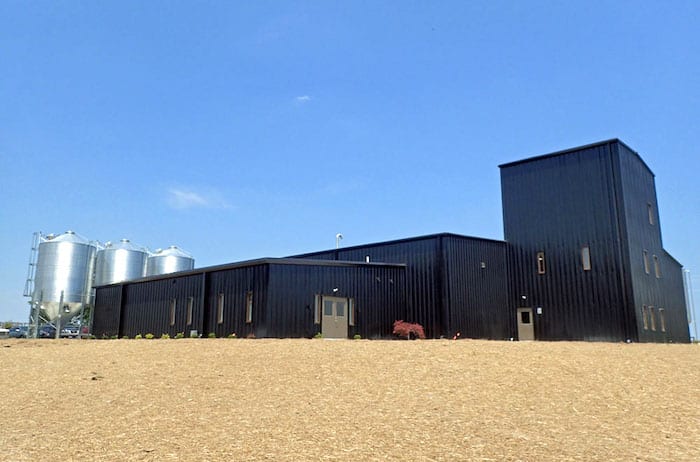 Fact is they’re in no hurry. Since their operation is well-capitalized, the men have time on their side. As co-founders of Ferm Solutions, a technical services provider to the ethanol and distilled spirits industries, they’ve done well “making sure everyone else’s (grain alcohol) tastes good,” Baker said. Also located in Danville, Ferm Solutions manages more than 500 yeast strains for some 400 distillers around the world. “After helping a lot of other alcohol distillers get theirs right, we thought it was about time to do our own thing.”

Yet don’t mistake Wilderness Trail for a hobby distillery, Baker stressed. While he didn’t disclose the investment in the microdistillery, it’s clear many millions were spent.

“Oh, this is a real business,” he said. “But we’ve got the ability to wait on our whiskey until we want to bottle it. We don’t have to rush a thing.”

Like many new distilleries, Wilderness Trail has a revenue stream born of unaged spirits, specifically Blue Heron Vodka and Harvest Rum. Both are well regarded and selling well, he said, but whiskey making on a larger scale is the goal.

Its current rickhouse is the first ever built by a Kentucky craft distillery, and it’s near its 2,100-barrel capacity. About one-tenth the size of an average rickhouse found at large Kentucky distillers, it has two floors that each contain three tiers of ricks. A second rickhouse is already under construction.

The bourbon currently at rest is made from a mashbill of 64 percent corn, 24 percent wheat and 12 percent malted barley, but perhaps most interestingly it’s made without sour mash. In this classic and common process, a portion of the “sour” or spent stillage (also called setback) is taken from a stripping run and added back to subsequent batches. The effort helps regulate pH during fermentation and produces greater consistency in flavor and yield from batch to batch. But as yeast management experts, Baker is confident his team can manage pH without using setback.

Wilderness Trail’s bourbon is distilled to approximately 145 proof before dilution to 110 proof at barrel entry. Baker predicts bottled proof will be 90, but “we’ll have to see how it tastes. The flavor in that barrel a few years from now will tell us a lot.” 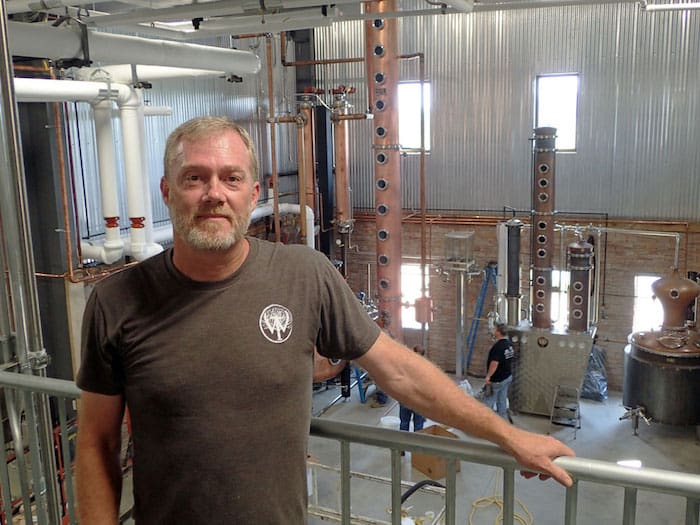 Baker said he and Heist never considered sourcing others’ bourbon to put something on the shelves under their brand’s name. They want Wilderness Trail to taste completely unique, and that means reflective of the fields surrounding the distillery.

“(W)e wanted it to be from here—and I mean right here in Danville,” Baker said. Pointing toward farms along the horizon, he added, “All the grain we use for our bourbon comes from a mile-and-a-half of where we’re standing. That’s local, and that’s important to us.”

Like so many modern stills, the company’s hybrid model is a head-scratching array of copper and stainless steel created to make whiskey and vodka. Its main feature is a 37-foot tall column with 16 bubble-cap plates and a pre-column beer warmer. Beside it is a pot still topped with a whiskey helmet for stripping runs.

Kevin Hawk, Wilderness Trail’s head distiller, called it a privilege “to get to work with things like this. We can make about anything we want. Vendome made us some great gear.”

Their Danville neighbor, Dave Scheurich, has volunteered his trained palate to the effort. The retired Woodford Reserve Distillery plant manager is a master distiller who will serve as Wilderness Trail’s master taster. Acknowledging that bit of good fortune made Baker smile.

“That’s kind of how this industry is,” he began. “People like to help each other out, and there’s so much knowledge to go around.”