This Whiskey Maker Built a New Kind of Still

I recently reviewed XO Alambic Distillery’s Scythe & Sheaf single malt, an eight-year-old single malt from Dayton, Washington. It’s a very tasty whiskey, but while researching it, I came across a term that made me scratch my head: “Figgins Reciprocating Still.”

The owner of XO Alambic, Rusty Figgins, is something of a Renaissance man. In addition to running XO Alambic, he’s a consultant, educator, and the founder and primary instructor at SIPS, a distilling training program. It turns out he’s also a still designer and manufacturer, because the Figgins Reciprocator is his very own invention, honed over a decade of experience in the spirits industry.

When Rusty Figgins first started working in the spirits industry as a co-founder of the Ellensburg Distillery in 2007, he was faced with a conundrum: What kind of still should he buy? At the time, craft distilling was in its infancy. The Ellensburg Distillery was only the second distillery in Washington State (now there are more than 100), and resources were scarce. Faced with a limited budget and a lack of suppliers, Rusty improvised.

“Back then, economizing was the name of the game, and it was not possible to be frivolous with cash flow,” says Rusty. So he decided he’d make his own still—and, while he was at it, design a totally novel configuration. “Nobody told me I couldn’t!” Rusty laughs.

He started by joining together two grundy tanks (a round-shouldered beer tank used in the U.K.) with a stainless steel manifold. Then, he attached them to a single condenser. “I presented it to my business partner and said, ‘This is going to be our still,’” says Rusty. “And he was powerless to disagree.”

But what started as an impulse towards economization had some unexpected benefits. Having two smaller kettles rather than one large kettle allowed the still to heat up much faster, a phenomenon familiar to anybody who’s tapped their feet as a too-full pot of pasta water takes forever to boil. It also, surprisingly, resulted in an improved flow rate of alcohol, with a much higher strength during the first distillation run than expected. 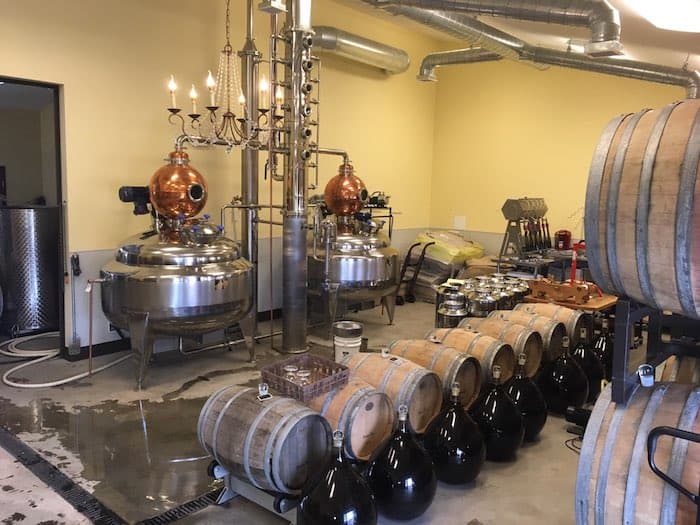 What was happening to create this result? As Rusty explains it, the vapor streams from each pot were encountering one another at the shared junction to the condenser. Rather than cancelling each other out or simply fusing, the vapor streams alternately compress one another, forcing one to retreat while the other advances into the condenser. In other words, they reciprocate. “In a quiet room you can hear it moving back and forth,” says Rusty. “It’s like breathing.” The result of this reciprocating action is additional reflux, which means a more refined and higher alcohol liquid coming out of the still.

Rusty knew he was onto something. He built on the design of that first simple still, adding new elements like perfectly spherical boiling balls mounted on each pot, as well as a six-plate column in place of a simple condenser. He tinkered with the location and amount of copper within the still. He refined the interior shape of each pot to amplify reflux by forcing the vapor through narrow passages between the main pot and the boiling ball, and then again from the boiling ball to the condenser. Each of these modifications served to underscore the Figgins Reciprocator’s primary goals of efficiency and effectiveness.

Eventually, Rusty began selling his stills, and today, there are nearly a dozen in use at distilleries around the country, including some manufactured by Still Dragon using the same concept as well as nine from Rusty’s company. Using the current design, and with all six plates engaged, a distiller can achieve 65% to 70% alcohol in a single pass, doing away with the need for a second spirit distillation.

Heat-up time is dramatically reduced as well. Rusty says it takes about 10 hours to do a 2,000 liter distillation run using his reciprocating design, rather than the 16 hours it would take on a traditional still, saving time as well as energy. The versatility of the design means distillers can use it to make a wide range of products, from vodka (yes, even with just six plates) all the way to full-flavored whiskeys.

And, of course, there’s the visual impact, which makes for engaging distillery tours. “The footprint is large,” says Rusty, “and it’s more energy than space efficient. But it’s a showstopper. It takes 10 minutes to describe how it works to a group, but people just insist on knowing how the thing works.”