Moonshine culture has been somewhat distorted in the reality TV age. In actuality, moonshining was a means of paying the bills for many large and poor families living in economically depressed areas of the Appalachian Mountains. Johnny Baker, whose nephew Joe Baker co-founded Ole Smoky Moonshine, recalls his grandfather selling his “corn by the jar” a far more profitable venture than selling the grain by the bushel.

Ole Smoky Moonshine Distillery was opened in Gatlinburg, Tenn., in 2010 as “a way for us to share an illegal part of our family’s history legally,” Baker explains. The distillery originally occupied a small space in the heart of Gatlinburg’s main tourist drag, but it’s since expanded to include an adjacent larger retail area, an additional whiskey distillery and tasting room down the street, and even a distillery and tasting room in nearby Pigeon Forge. Export packaging and shipping is handled offsite at yet another distillery location. It was the first legal moonshine operation to open in the state of Tennessee after state laws changed to allow them in 44 counties. 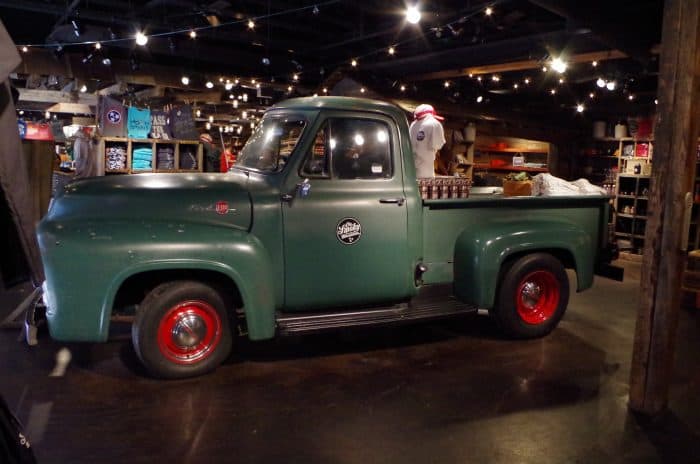 Inside the Ole Smoky gift shop (image via Maggie Kimberl)

Baker jokes that “all of our distillers have been home-schooled,” meaning they learned their craft from family members who’d moonshined for generations. During a recent tour Baker recalls the story of a family member who had set up a moonshine still in his attic, running the exhaust out the chimney. He was arrested when he had smoke coming out his chimney during the wrong time of the year.

“It’s an art, not a recipe,” Baker says of the products turned out at Ole Smoky. The mash bill consists mostly of corn with a small amount of rye, which is unusual for most moonshine. “Making straight corn liquor is a dying art.” Depending on the weather, distillers here sometimes supplement with enzymes to maximize sugar conversion.

The original Ole Smoky Moonshine Holler location, which, according to Baker is the most visited distillery in the United States for the past two years, has packed a lot of detail into a small space. While most visitors won’t get a chance to enter the actual distillery, it is set up so everything happening can be viewed through a screened divider.

The family business has grown from seven employees to almost 300 in just six years. The Ole Smoky Moonshine Holler alone has a capacity of 1,000 proof gallons a day when running three shifts, and its products are distributed in all 50 states and over 50 countries.

Since the distillery opened up in Gatlinburg six years ago others have followed in the area, though Ole Smoky stands out as the most successful and recognizable among them.

“We made it look easy, I guess, but not everybody’s got that passion,” says Baker.

Group tours are free at all three locations but must be scheduled in advance. The Gatlinburg locations are open 10 a.m.-10 p.m. daily, though moonshine sales are restricted to 12 p.m.- 7 p.m. on Sundays. The Pigeon Forge location is open daily from 10 a.m-.11 p.m.